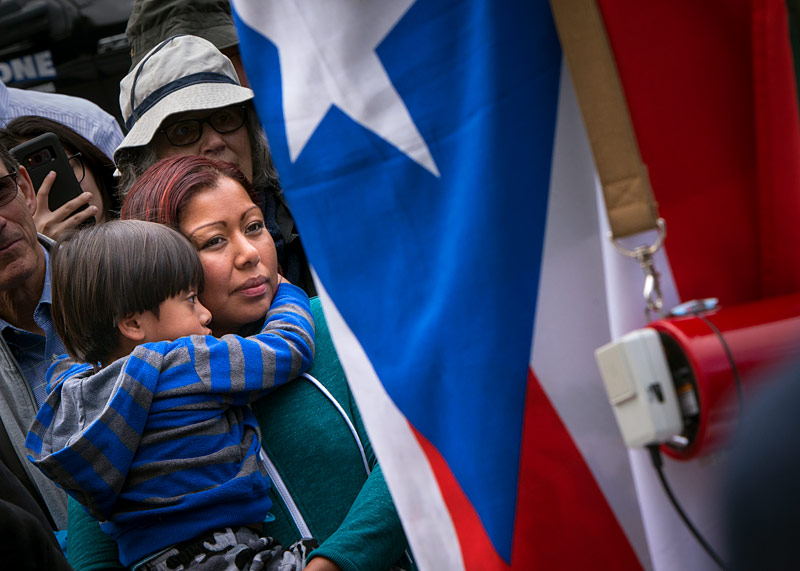 Blanca Rodriguez holds her son during the demonstration on Sept. 8.

EDITOR’S NOTE: The last names of some people in this story were withheld in order to protect their privacy.

Yessica was 3 months old when she arrived in the United States from Mexico with her parents.

The 24-year-old, now a mother herself, graduated from Our Lady of Mercy High School in Brighton. Thanks to a scholarship from the Sisters of Mercy, she earned an associate’s degree from Monroe Community College. And until Sept. 5, she had planned to apply for the nursing program at another local college.

Those plans are now on hold, as she and other young immigrants wait to see what will happen over the next six months as the U.S. Department of Homeland Security phases out the Deferred Action for Childhood Arrivals (DACA) program.

"Dreamer" Kemberly Gil Gachancipa gazes at the participants in a Sept. 8 rally to demand congressional action on the Deferred Action for Childhood Arrivals (DACA) program.

Through DACA, more than 800,000 immigrants like Yessica — also called Dreamers — were granted deferred action of potential expulsion from this country for a period of two years and were authorized to work, study or join the military, according to local advocates. They were younger than age 5 when they traveled illegally to the United States with family members.

The DACA phase out, which was announced by U.S. Attorney General Jeff Sessions in September, will give Congress the opportunity to “consider appropriate legislative solutions” over the next six months, according to information at whitehouse.gov.

Yessica was among the nearly 200 people who demanded action on DACA from local congressional representatives during a Sept. 8 rally in front of the Federal Building in downtown Rochester. More than 20 local organizations participated, including Legal Aid Society, Worker Justice Center of New York, and such faith communities as the Sisters of St. Joseph.

“We pay taxes,” Yessica said. “I work. … We’re trying to contribute to this country. This is the only home I’ve ever known.”

Blanca Rodríguez knows the pain of having made fateful decisions for her children. During the Sept. 8 rally, the member of Alianza Agricola (Agricultural Alliance) tearfully recounted the guilt she feels knowing her son is paying the price for her decision to enter the country illegally with him when he was a child. Those choices were made, however, to escape poverty and violence and find a better future for their children.

She called on congressional leaders to not punish the Dreamers by taking away that future, she said.

“They didn’t come over of their own volition,” she said. “They are not at fault.”

If no legislation is agreed to by the time the six-month period ends, the DACA recipients will begin to lose their work permits, although they will retain their eligibility to remain in school, said Hannah Hough, an attorney with Legal Aid of Rochester. Since the announcement, Hough said her office has been working with current DACA recipients who were eligible to renew their applications until the Oct. 5 cut-off date. Legal Aid also raised funds to help offset the $495 renewal fee, Hough said.

“We’re trying to get everybody to preserve whatever rights remain under DACA,” she said.

In response to the White House’s action on DACA, New York Gov. Andrew Cuomo and state Attorney General Eric Schneiderman responded with a threat “to sue to protect the ‘dreamers’ and the state’s sovereign interest in the fair and equal application of the law,” according to a press release from the governor’s office.

The National Association for the Advancement of Colored People and Dreamers in San Diego also have filed lawsuits saying that the president’s decision is a violation of due process, according to informtion provided by Hough.

Dr. John “Lory” Ghertner, who has worked with many DACA students through Migrant Support Services of Wayne County, and other DACA recipients have delivered letters to the offices of U.S. Sen. Kristen Gillilbrand and Sen. Chuck Schumer. They also have written to Congressman John Katko, who represents Wayne County, he said.

“We will keep the pressure on,” he said.

Such public pressure is valuable, since the DACA issue again puts a spotlight on the need to overhaul the U.S. immigration system, noted Carly Fox of the Worker Justice Center of New York.

“The Dreamer movement has been very unified and strong in their message to the Democrats: We’re not compromising our communities for a short-term remedy,” she said. “This is a much bigger issue. … We don’t have visionary policies on how we’re going to treat future immigration flows, or our neighbors to the south. If you don’t talk about these things, you’re talking in circles.”

Supporting and advocating for DACA recipients and undocumented students as well as raising awareness of immigration issues is the focus of group of students from the University of Rochester known as URDreamers, said Haydi, a sophomore at the university who is studying political science.

Originally from Honduras, she had been separated from her father for more than a decade as he worked in the United States to provide for his family back in their native country. She arrived in the U.S. in 2012 and met her father for the first time finally put a face to the voice on the phone and the person who had written her letters and poems.

Haydi added that she is able to attend college because of a scholarship and the university’s own policy to not ask about immigration status.

“We struggled a lot to get a safe way for our family to be together again,” she said. “I didn’t know what it meant to overstay your visa or anything. … That’s what people don’t see. Most students who are DACA (recipients), their parents brought them. Others, like our parents, were not planning to stay more than two years. (They wanted) to save enough money and go back.”

Sharing these personal stories is what the UR group, which was founded by DACA students in 2015, is planning to do during an immigration retreat for farmworkers, activists and students on Nov. 10-12 at the Rural & Migrant Ministry offices in Lyons

“This is not a political issue,” she said of immigration reform. “This is about people’s lives.”