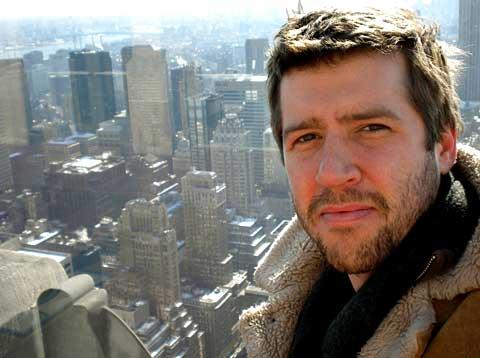 BROCKPORT — Karen Watt, a local produce farmer, knew she had to bring the film "The Other Side of Immigration" to the Brockport community immediately after watching it at a conference in Texas last fall.

Filmmaker Roy Germano tells the stories of the family members left behind by relatives who risk their lives to travel to the United States to find work, explained Watt, who owns Watt Farm in Albion.

"There’s a cost to be borne in Mexico by this transfer of diligent workers to come to America to earn more money," Watt said. "It’s just a very different insight, especially from my perspective as a farmer in the U.S."

Watt is a board member with Oak Orchard Community Health Center, which sponsored Germano’s visit to Brockport last month to show the film and discuss the issues it raises.

Germano grew up in Louisville, Ky., and knew little about migrant workers or Latin American issues, he said during an April 16 phone interview. But seven years ago, he found himself working alongside undocumented workers from Mexico and Ecuador at a restaurant in Chicago and became intrigued by their stories. He later moved to Austin to work on his doctoral dissertation on Mexican immigration and politics at the University of Texas.

In 2007 he interviewed 700 families as part of his doctoral work with a Mexican research team he had hired for his project. The idea for a documentary hit him during those interviews and he began filming the families, he said.

"These are stories I felt weren’t making it into our media," said Germano, who now lives in the Bronx and is still finishing his dissertation. "The interviews went really well. I got extremely lucky. People were excited and in a sense desperate to tell their stories."

During the April 24 screening, Germano said that he was hoping a television network or film-distribution company would pick up the film, which is in Spanish with English subtitles. However, he decided to release the self-published film on DVD following the passage of a new law in Arizona that requires immigrants to produce papers proving they are in the country legally. A sign-up list to obtain a copy of the film may be found at www.facebook.com/migrants.

"I feel I can’t wait any longer," Germano said. "I have to release this on my own."

Peter Ciavarri of Irondequoit, who attends Rochester’s Our Lady of Perpetual Help Parish and Holy Cross Parish in Charlotte, said that the film offers a message that more people should receive.

"It gives the reasons why the Arizona law recently passed should not exist," he said.

Farmworkers in the film said that they are not able to compete with more efficient farming techniques in the U.S., and most said that they are unaware of the available Mexico government programs to help improve efficiencies on the farm. Corruption among government officials means that Mexican farming subsidies rarely make it to their intended recipients, those interviewed in the film said.

Ciavarri said that he heard about the film from his daughter, Nancy, who is a doctor at Oak Orchard. Ciavarri said that he comes from a family of immigrants and his son has a background in the study of Latin American issues, so his family is very interested in migration issues. He noted that his father came from Italy in 1920, and his mother’s parents arrived around 1918.

"If my father were alive and in Arizona (under the new law), he would have to carry his naturalization papers with him to avoid being charged with a crime," Ciavarri observed.

Another eye-opening fact that Germano said he learned while making the film was how much of the money that migrants send back to their families in Mexico is used to purchase such basic items as food, clothing, shoes, even school supplies. Many workers would prefer a system that would allow them to travel back and forth between the U.S. and Mexico, Germano said he discovered.

The film also documents the struggles of a couple named Javier and Carolina, who told about their children growing up fatherless after Javier crossed into the United States several times to make money. In towns where children lack strong male role models, drug abuse and other social problems are common, those in the film said.

"I don’t know who suffers more, those who cross the borders, or those they leave behind," Carolina said in the film.

At the screening, Germano also said that he wants to create a charity that will help establish small enterprises within Mexico to give people employment and a reason to stay in their communities. He said that he also hopes to help better publicize programs that are available in Mexico that could promote development, and also hopes to connect entrepreneurs with markets to buy items they produce.

During his visit here, Watt drove Germano through the largely rural areas from Buffalo to Brockport so he could see this area’s side of the farming issue. Watt said that farmers here are already employing fewer workers and she fears for the harvest season. She and her husband own 260 acres with 40,000 fruit trees, which all must be picked by hand. The farm needs about 30 people for the harvest season, which Watt predicts will be hard to come by.

"The ICE guys have just decimated us," she said of the tactics of U.S. Immigration and Customs Enforcement employees, whom residents see outside of Laundromats, churches and the Oak Orchard health center.

"Anybody in their right mind, why come to a border state to try and work?" Watt noted. "That’s the issue now — who’s going to come and work for us even if (the person is) legal. That’s the tone that’s been set this past year."

Jeff Davignon, a parishioner of Church of the Nativity of the Blessed Virgin Mary in Brockport, said that the film is a beginning of a dialogue that needs to take place.

"The decision is not as simple as we have to build a wall to stop this (illegal immigration) or open up the borders," Davignon said.