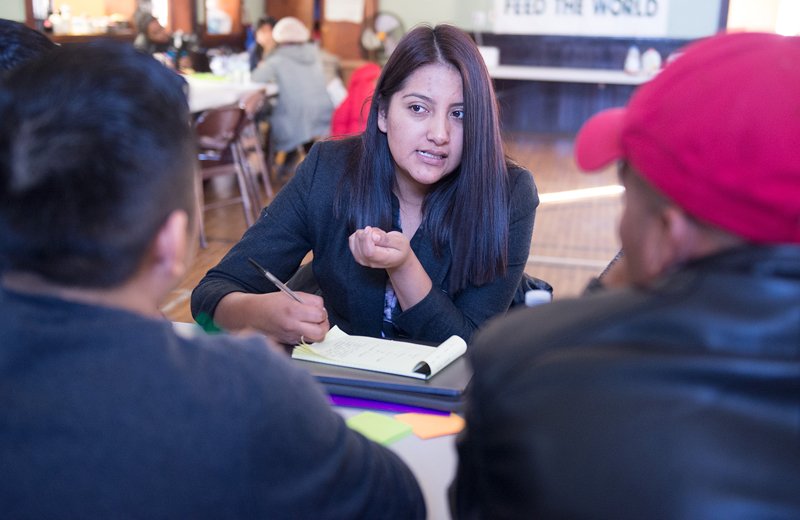 LYONS — Kemberly Gil wants undocumented immigrants to not only step out of the shadows but also support other causes in the communities in which they live.

“If (others) see undocumented immigrants are part of a community, that will create relationships,” she said during a retreat last month for immigration allies and area college students with and without Deferred Action for Childhood Arrivals (DACA) status. “It’s good for me to know other issues and be an ally somewhere else.”

Gil is a student at SUNY Brockport who received DACA status so she can continue her education. She and other DACA students, along with immigrant students who do not have papers but didn’t qualify for DACA, organized the three-day retreat to talk about their personal struggles and other immigration issues Nov. 10-12 at the Rural & Migrant Ministry Center.

“We must become part of the fabric of a community if we want (that community) to accept us” immigrants regardless of legal status, said Blanca Rodríguez, a member of Alianza Agricola (Agricultural Alliance). “We need more events like this one … to continue the fight (for immigrants’ rights).”

As congressional debate over DACA and President Donald Trump’s decision to phase out the program continues at the national level, the local retreat’s goal was for participants to unite with other students and community allies. Organizers also wanted participants to inform each other about issues important to different immigrant communities around the area to better support one another.

About 50 people, including immigrant activists, attended on the last day of the retreat to explore the different campaigns happening in the area, said Gabriela Quintanilla, another member of the retreat planning committee.

Quintanilla noted it was important to hold the retreat in a rural area like Wayne County in order to unite “dreamers” — the name applied to DACA students — and farmworkers.

During the retreat, Quintanilla said participants learned about the Justice for Farmworkers campaign being led by Rural & Migrant Ministry; the Green Light Campaign led by Worker Justice Center and Alianza Agricola for farmworkers to obtain driver’s licenses; the scholarship fund for undocumented students at University of Rochester created by the DREAMers student group; and the outreach work of SUNY Geneseo’s new Student Coalition for Migrant Workers group to provide English classes and social-justice advocacy.

Victoria Morales, a SUNY Geneseo senior and member of the Student Coalition for Migrant Workers, said the group offers students on campus a way to connect with the migrant community around them. Activities will include a picnic, offering rides and child care for migrant workers to attend Alianza Agricola meetings, and spreading awareness about the Green Light and immigrants’ rights causes, she said.

“We’re getting to know one another on a human level and develop relationships and … work together in solidarity,” she said. “We are here for the long haul.”

In addition to learning about groups like the Geneseo one, Mohammed Dalhatu, a Nigeria native who moved to New York City at age 10, said the retreat offered insight for immigrant students like himself about the importance of supporting other causes, such as the farmworkers’ call for driver’s licences as well as fighting for young immigrants to be able to stay in this country.

“I hope that it (DACA) passes because a lot of people are affected,” he said. “Regardless if it passes, though, the fight needs to continue. … There are still a lot of people who are marginalized.”

Tatiana Quintanilla said the retreat offered an opportunity for immigrants and community allies to share and listen to each other’s stories. She is a freshman at SUNY Brockport who arrived in the United States at age 7 and also has DACA status.

“Then, you can grasp something that you can take back to your community” after the retreat, she said. “And (that information) can create more opportunities for themselves (immigrants) and others who are in the same situation.”

Gabriela Quintanilla said that retreat participants will have a range of upcoming events to partake in, including a Farmworker Fair Labor Hearing hosted by RMM in January in Albany, and a Dec. 6 immigration rally in Washington, D.C.

Anne Marie Butler, a graduate student at the University of Buffalo, said the retreat also offered helpful information for her to bring back to campus, as the university’s new group, Justice for Farmworkers of Western New York, has had a difficult time trying to connect with the migrant community. One good takeaway was the idea of continuing to have meetings for students and the community no matter the attendance, which helps boost awareness, she said.

“We want to work on outreach and connecting,” she said.