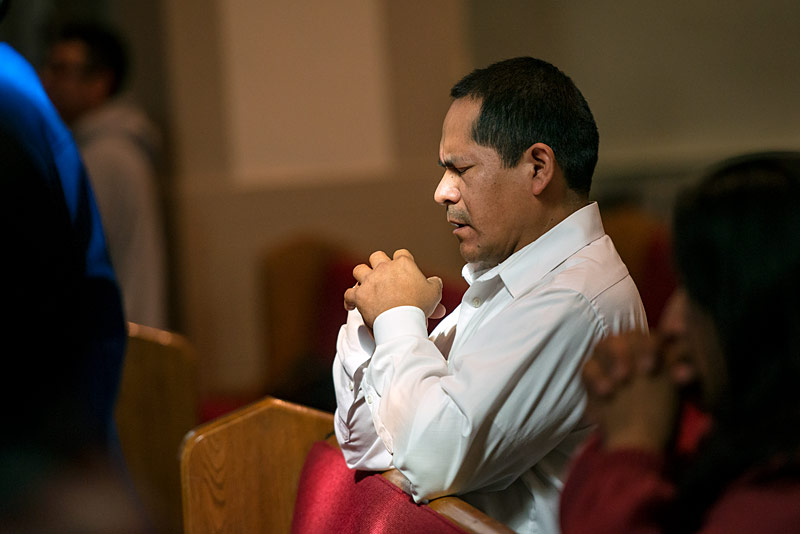 BROCKPORT — When Salvador Vaca-Vaca first arrived to work at Heberle Farms in Hamlin four years ago, the community at Nativity of the Blessed Virgin Mary Parish did not offer a welcoming celebration for farmworkers.

In 2015, Nativity revived what had been a longtime bienvenida tradition, and for that Vaca-Vaca is grateful, he said following the 2017 welcoming Mass held Sept. 10. He attended the bilingual Mass with a cousin and a fellow worker who are all from Michoacan, Mexico, as did a large group of farmworkers from Martin Farms in Brockport.

The bienvenida makes workers like him feel appreciated, he said.

“It motivates me,” said Vaca-Vaca. “We feel like we are at home. (And we appreciate) the gratitude expressed for our labor.”

The tradition, which had been held at the beginning of the harvest season for three decades, had been discontinued for several years due to low attendance by workers because they lacked transportation, had conflicts with soccer matches or their work schedules, or because they feared being detained by federal immigration officials, according to members of the Brockport Ecumenical Organizing Committee. The committee had overseen the former bienvenidas that used to take place in June.

Jonathan Vaca-Ortiz, who works at Heberle Farms, said he and farmworkers like him feel very fortunate to have work permits — called H2A visas — so they do not need to fear being out in the community. The visas allow them to return to the area to work for the same farmers, he said.

Accordinding to Juan Faulkner, a member of Nativity’s parish council, about 35 workers missed the welcome celebration because of paperwork delays involved with obtaining the visas. Faulkner also is part of a migrant ministry committee whose members visit all the area migrant camps to make people aware of the Sept. 10 Mass and parish picnic that followed at Hafner Park.

The need to provide a welcoming celebration to the workers at those migrant camps has a personal connection for Nativity’s pastor, Father Joseph McCaffrey. He noted in his homily that he grew up in a military family and moved many times during his childhood, so he knows what it is like to want to feel at home in a new place.

In addition to making farmworkers feel welcome, the bienvenida also is a show of gratitude to the people who are helping provide food for the area, he said.

“Their work is so important for us,” added Father McCaffrey. “We greatly respect their work. … It is a wonderful gift to the community.”

Recognizing the gifts that the Anglo and Hispanic parishioners at Nativity offer one another is one of the reasons that the parish combined the bienvenida Mass with its parish picnic, noted Father McCaffrey.

“It’s an exercise in consciousness raising,” he said. “Nativity is one parish. That’s the idea.”

The parish picnic included soccer games between farmworkers and socializing with parishioners from Rochester who also were invited to be part of the bienvenida. This year’s festivities also included a traditional Peruvian dance performed by a local group.

Consuelo Sofia Lee said she is friends with Jorge Salgado, the migrant minister at Nativity, who invited her group to perform.

“I thought it was a great idea,” she added. “They (workers) work hard and leave their country and family behind. I greatly admire them. That is why, we were so happy to dance (at the picnic). … We did it with great caring and respect for these workers.”