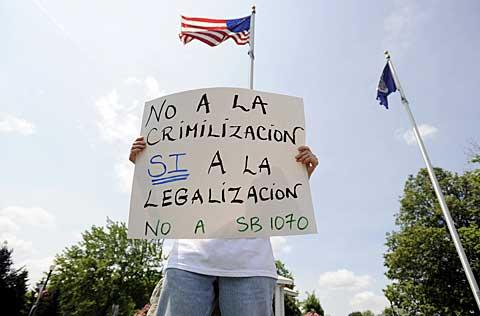 BRIGHTON — Local activists took part in the National Day of Action against the Arizona legislation known as SB1070, which calls for police to arrest anyone suspected of being in the country without legal documentation.

Thousands of people marched on Phoenix on May 29 to demand justice in light of what they call legalized discrimination and hate, said Roberto Resto, a member of the Rochester Alliance for Immigrant Rights. His group organized a local rally of about 25 people who gathered at the Twelve Corners along Monroe Avenue.

Resto cited a recent Arizona case in which a Puerto Rican man was detained for 24 hours for failure to produce documents, even though Puerto Ricans are automatically American citizens.

Resto added that supporters of immigrant rights are pushing several demands at the national level:

R.J. Bean, another member of the Rochester Alliance for Immigrant Rights, said local advocates also must learn from the accomplishments of groups in Boston, Los Angeles and Providence, R.I, whose city councils have voted in favor of economic boycotts of Arizona.

"To stop the bill and copycat bills … you have to put economic pressure (on Arizona) to repeal the bill," Bean added.

While many motorists passing the Twelve Corners area May 29 honked in support for protesters holding signs and chanting against the Arizona bill — one woman even gave a $20 donation — others drove by shouting, "No papers? You gotta go back." and "Tell them to go back to their country."

An amendment stating that officers "may not consider race" in enforcing the new law is an attempt to circumvent accusations of racial profiling, noted Margaret Regan, author of a book about conditions along the Arizona-Mexico border. If police officers are being asked to look for illegal immigrants, they’re going to use race and ethnicity, remarked Regan, who recently spoke about her book in Rochester.

"If it’s not intended to be racist, it’s racist in effect," said Adam Hayes of Brighton who attended the local rally with his 3-month-old son, Finnegan.

"Effective immigration enforcement can be achieved without the new law," asserts the statement from the USCCB, which has created a website at http://libraries.cua.edu/achrcua/packets.html, showing the historic role of the bishops’ conference in the immigration debate.

"Criminalizing unlawful presence and requiring frequent police questioning stigmatizes and marginalizes Arizona’s immigrants and Hispanic residents. … The new law will, despite intentions to the contrary, create distrust and misunderstanding in immigrant communities and thus undermine solidarity among Arizonians."

Local advocates observe that such mistrust and fear and racial profiling already exist in the Rochester area.

Ami Kadar of the Centro Independiente de Trabajadores Agricoles, said that within the last month she had personally bailed out from the Batavia detention center a person who had been stopped for "walking while Mexican" in Brockport.

"So yes, we have racial profiling around here," Kadar said. "But at least it’s not legislated into law and our local police force doesn’t have to determine a person’s immigration status … when they detain them."

Another concern raised by the USCCB statement is the effect racial profiling has on community safety.

"So besides good, hardworking people suffering unfairly, we the average community members, may well suffer because the police is either busy enforcing immigration laws when we need help or can’t get the information they need to apprehend the real criminals," Kadar agreed.

Although he said he agrees that the federal government should supersede the Arizona law, Dr. John "Lory" Ghertner of Sodus said during a May 27 interview that he is taking a more personal approach in helping people understand this debate.

"It’s counterproductive to talk about a group of people as the root cause of evil," said Ghertner, who helped develop Migrant Support Services of Wayne County. "It’s not; it’s the system."

Ghertner said migrant workers have asked him to tell their stories as he speaks to groups around the area. In doing so, he omits discussion about legislation.

"I leave politics out of it and let people speak for themselves," he added. "I try to be a voice for 8,000 people, which I don’t have the right to do. … I tell people about who (the immigrants) are."