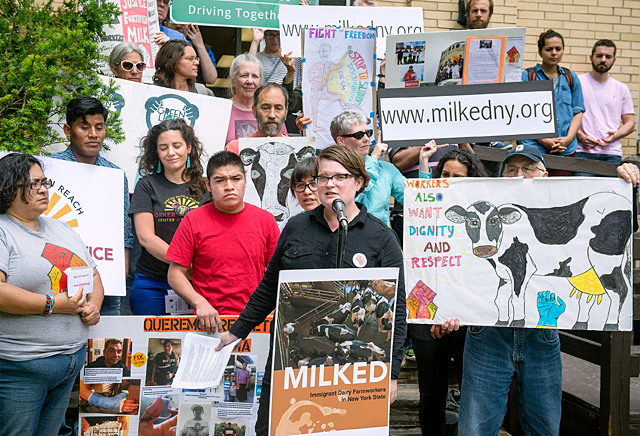 SYRACUSE — Immigrant advocates have released a report on the dairy industry that calls for creating safer work and housing conditions and providing labor protections that workers in other industries receive, especially the right to organize.

The report — "Milked: Immigrant Dairy Farmworkers in New York State" — was presented during a June 1 press conference at the Workers’ Center of Central New York in Syracuse. The report was developed by Carly Fox of the Worker Justice Center of New York; Rebecca Fuentes of the Workers’ Center of Central New York; Syracuse University’s Gretchen Purser, assistant professor of sociology, and Fabiola Ortiz Valdez, a doctoral candidate in anthropology; and Kathleen Sexsmith, a doctoral candidate in development sociology at Cornell University.

The report is based upon face-to-face interviews conducted in 2014-15 with nearly 90 immigrant workers representing 53 different dairy farms in all regions of the state, Fox said. Two-thirds of the survey respondents were Mexican and the rest were Guatemalans, and 90 percent were men, according to the report available at https://milkedny.org. Most of the workers are identified by pseudonyms, as they were guaranteed anonymity if they participated, Fox said.

"Nine out of 10 workers surveyed believe farmers care more about the cows than the workers themselves," Purser noted during the press conference. "(Workers) are also tremendously socially isolated."

Findings in the report also included the following about immigrant dairy farmworkers:

* Two-thirds of dairy farmworkers surveyed have experienced one or more injuries while on the job.

* One-third of dairy farmworkers received no job training of any kind. Of those who were trained, that training often was insufficient either because it was brief (as little as 10 minutes), offered in English or conducted by immigrant coworkers who were not trained to educate others thoroughly.

* More than 80 percent of dairy farmworkers in New York are estimated to live and work on farms with too few workers to fall under OSHA jurisdiction for inspection of the dairy farms they work on.

"Dairy companies should implement and enforce worker-led codes of conduct for ethical labor practices for their fresh milk suppliers, purchasing only from those farms that participate in rigorous labor rights’ monitoring conducted independent of the dairy purchaser or supplier," the report states.

Crispin Hernández was among the June 1 presenters of the report. He filed a lawsuit last year after being fired from a dairy farm in Lowville allegedly for meeting with other workers to talk about workplace conditions, Hernández claims. The Workers’ Center of Central New York and the Worker Justice Center of New York also are plaintiffs in the lawsuit.

"We are contributing to this country," Hernández said during the June 1 press conference. "We all have the same rights. It doesn’t matter where we come from. We are all human beings. … That is why we are fighting for the right to organize and to (obtain) driver’s licenses. It is very important."

Under current labor laws, farmworkers who choose to organize are not protected from retaliation by their employers, which is a violation of the state constitution, according to the lawsuit the New York Civil Liberties Union filed against the state on behalf of Hernández in New York State Supreme Court of Albany County. It is the first lawsuit that demands that farmworkers receive the same basic protections from the state that most other worker receive, according to information from the NYCLU (http://bit.ly/2qTKFHK).

In addition to the lawsuit, Fox said the advocates and workers will continue to lobby state officials to expand labor protections. On average, dairy workers work 12 hours per day, six days a week, the report found. Like all agricultural workers in New York, they are excluded from the right to a day of rest and the right to overtime pay.

The advocates also plan to expand their "Green Light" campaign, Fox added, to pressure state lawmakers to allow anyone to obtain a valid driver’s license without requiring Social Security Numbers. The change would allow the use of foreign passports as identification in the application process and would require those applying to comprehend English and existing traffic regulations. Immigrant dairy farmworkers’ inability to obtain driver’s licenses means they leave the farm as little as once every 11 days, according to the report. Lacking their own transportation means workers may not seek out needed medical attention and may be exploited by drivers for trips to the grocery store or other necessary errands, Fox explained.

Fox said workers and advocates also will pursue a campaign to ask consumers to urge large companies to implement and enforce worker-led codes of conduct for ethical labor practices for their fresh milk suppliers. The companies also will be asked to purchase only from those farms that participate in rigorous labor rights monitoring conducted independent of the dairy purchaser or supplier. Chobani is a company that is being targeted, she said.

A Chobani official did not respond to El Mensajero Católico’s request for comment.

In response to the report, the Northeast region spokeswoman for Dairy Farmers of America said its members value their employees and strive to create an environment focused on safety and quality. The DFA is a dairy marketing cooperative that is owned by nearly 14,000 dairy farmers across the United States.

"Working on a dairy farm is hard work," spokeswoman Jennifer Huson said in an e-mail to El Mensajero Católico. "Therefore, there are many policies and protocols in place to ensure the safety and well-being of all workers on dairy farms. DFA supports fair labor and human rights protections for all workers on dairy farms and continues to work with others in the industry to provide resources to farm owners on labor regulations and best-management practices for on-farm labor."

Such worker protections need to be expanded to all workers in New York, which was the main focus of the report, Fox said. The information gathered also helped fill in gaps in research about farmworkers in the dairy industry.

The report’s interviews consisted of 225 questions covering participants’ demographic backgrounds, work histories, wages and working conditions, housing conditions, social integration, encounters with immigration enforcement agents and interests in organizing. As has been the goal of advocacy efforts in the past year, Fox said workers also participated in the research itself and helped develop interview questions, led focus groups, and transcribed and analyzed data, she said.

"Immigrant dairy farmworkers are a hidden population that is difficult to access because of their vulnerable immigration status, work schedules, and geographic isolation on rural farms," the report states. "There is no database of the population of dairy farmworkers in New York from which our sample could be drawn. … This study was realized through the time-consuming and labor-intensive process of direct worker outreach."