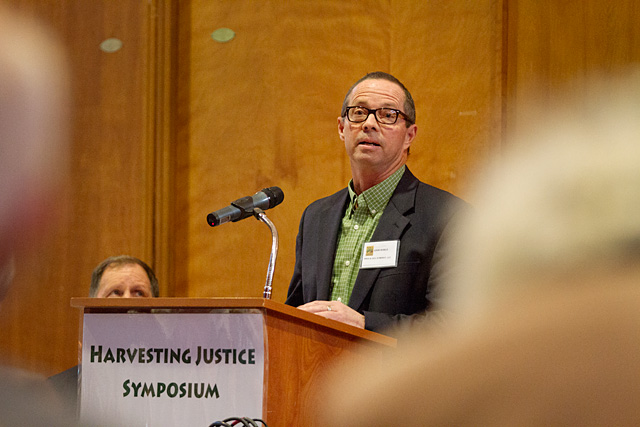 John Noble, a seventh-generation dairy farmer, speaks during a symposium on farmworker justice Oct. 29 at Temple B'rith Kodesh. As president of Noblehurst farms, Noble has employed people from more than 10 different countries in various positions.

BRIGHTON — Anselmo Castillo has not seen his two children in 15 years.

"I have never returned to Mexico," he said. "I left my friends. … And my wife left me because I never went back for her. I’ve dedicated myself to working in the fields."

That work supported his children, who are now adults with good jobs in Mexico City, said Castillo. He holds out hope for federal immigration reform so he can finally travel back and see his children, who are now in their late 20s. And the only reason Castillo left his country was because the North America Free Trade Agreement put him out of work as a shoe repairman after an influx of cheap shoes flooded the market, he explained.

"If they would change the (immigration) laws, I could travel back and forth," Castillo noted. "We need a just government. … But with all that I’ve experienced, I don’t believe it possible of the government here or in Mexico."

Castillo attended the Oct. 29 Harvesting Justice Symposium and Dinner sponsored by Rural & Migrant Ministry and PathStone Corp. in partnership with the Latino Rotary Club of Rochester and Ibero-American Action League.

The event included a panel discussion moderated by Judge Frank Geraci Jr., federal judge for the western district of New York. The panelists were Librada Paz, a Mexican immigrant who was named last year’s laureate by the Robert F. Kennedy Center for Justice and Human Rights; John Noble, president of Noblehurst Farms in Livingston County; and Jorge Montalvo, who developed the New York state Office for New Americans with 27 sites throughout New York.

Keynote speaker Bruce Goldstein, president of Farmworker Justice based in Washington, D.C., said he that has seen hopeful signs in recent weeks on a compromise AgJOBS bill negotiated in the U.S. Senate with support from major agriculture groups and the American Farmworkers Union. The compromise was included in the Senate bill proposed earlier this year by the "Gang of 8" to offer migrant workers an earned legalization program and a new guest worker program, Goldstein said.

The second part of that compromise is important to such farmers as John Noble, who also is president and chief executive officer for Synergy, which converts methane gas from cow manure into electricity. He has found that his foreign-born workers, which make up about 20 percent of the workforce on his dairy farm, are mainly from Mexico, travel to this area to work and earn money for their families back in their native countries, he said. They do not express any interest in staying here, Noble remarked.

"You cannot run a dairy farm without hiring foreign-born workers," he said. "These people are motivated. They want to work, eat, sleep and go home."

And these workers, who are so essential to U.S. agriculture, deserve immigration reform so they no longer live in fear and isolation and can be seen as the "face if Jesus," Noble added.

"They are in the shadows," he said. "So, anything we can do from an immigration standpoint to help them come out of the shadows would be wonderful. … This (issue) is about people who want to do farm work. And few people living a mile away from here would … be willing to do that (work) for any amount of compensation."

A bill similar to the Senate compromise one has been introduced in the House of Representatives by Democrats, much to the concern of immigration advocates, but a handful of Republicans have voiced support, Goldstein said.

"We don’t care about parties," he added. "We just want immigration reform, but we need bipartisan support. … We feel (however) the dam has broken as more and more Republicans sign on."

Goldstein said that he understands the doubt that workers such as Castillo feel about reform ever passing. As an advocate working to see reform pass for the past 13 years, he shares the frustration, he added.

"I’d say there is a 55 to 45 percent chance that it’ll pass," Goldstein said. "I do know one thing for sure. If we stop fighting, it will never pass."