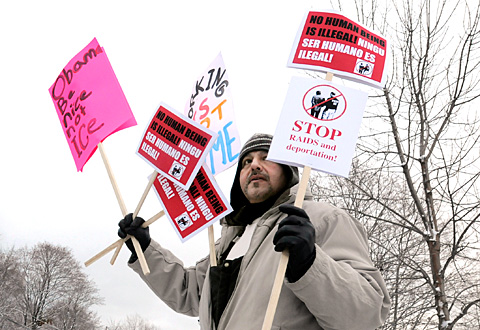 BRIGHTON — Local residents and activists support the comprehensive immigration-reform legislation proposed by the U.S. Senate and are hopeful that is will pass this year.

But such immigration activists as Mares do have some concerns about the bill. For example, he said that he questions why farmworkers must wait up to eight years for a path to citizenship.

Mares also worries about what will happen to the undocumented workers who have been detained and made felons because of current immigration laws, he said. As an outreach worker for Catholic Charities of Wayne County, he said that he has received "thousands of calls" from migrant workers about the bill.

"They need a pathway to citizenship," Mares said of those workers who were detained. "They committed a civil offense. … We made it a felony."

Andrea Callan, New York Civil Liberties Union’s statewide advocacy coordinator, addressed some of those concerns during her presentation at the forum. The Rev. Richard Witt, executive director of Rural & Migrant Ministry, and Chava Redonnet from St. Joseph’s House of Hospitality, also were panelists.

"This (immigration-reform legislation) is a compromise," Callan added. "(But) the proposed law does allow for application for waivers of those criminal convictions on humanitarian grounds or to ensure family unity, or if otherwise in the public interest."

Callan said that immigration activists were relieved that the U.S. Senate’s proposal offered a "rather broad" pathway to citizenship. The Senate’s "Gang of Eight," which includes New York Sen. Charles Schumer, introduced the "Border Security, Economic Opportunity and Immigration Modernization Act" on April 16, according to information at www.schumer.senate.gov.

A survey of Catholic voters found that 77 percent of them support a proposal that allows earned citizenship through meeting such requirements as registration, paying a fine, paying taxes and taking English classes, according to the U.S. Conference of Catholic Bishops.

Georgia DeGregorio, chairwoman of the League of Women Voters, said that the bill includes key provisions that the league has supported since before the 2008 election. The national league even studied the issue for two years in anticipation that a bill would come up during President Barack Obama’s first term, she noted.

DeGregorio said that the league’s statement on immigration includes the following key policy recommendations, which also are included in the Senate proposal:

* Meeting the economic, business and employment needs of the United States.

* Being responsive to those facing political persecution or humanitarian crises.

* Provisions for qualified people to enter the country on student visas.

* Fair treatment under the law for all people.

Treating all people fairly is part of the U.S. Constitution, noted Callan, especially when it comes to due process as stated in the Fifth Amendment.

"Every person, from the minute you step on American soil … you have basic constitutional rights including due process, which is completely gone from our immigration system," she said.

While border security remains a priority in the bill, the enforcement-only tactics that Republicans have rallied around in recent years and Democrats have gone along with do not help any industry, particularly agriculture, Callan added. Farmers continue to be in desperate need of workers due to immigration raids and deportations, she said.

Julie Suarez, public-policy director of the New York Farm Bureau, said that the bureau supports the bill because it will have a major impact on farming.

"From our perspective, being able to adjust the status of individuals (who are) here now, who are key employees on our farms, and are working with documentation that is found later to be questionable, is very important," Suarez stated in an e-mail. "We are also pleased at the inclusion of the nonimmigrant agricultural worker program visas, as on a going forward basis that will really help ensure seasonal labor needs are met."

The bill’s passage will require support from as many industries and groups as possible throughout the country, Callan noted.

"I’m tired of going to D.C. asking for these reforms," she said. "(Reform) is going to happen this year, but it comes down to all of your voices … saying that these are issues we care about. It’s only going to happen when legislators feel accountable for their votes."