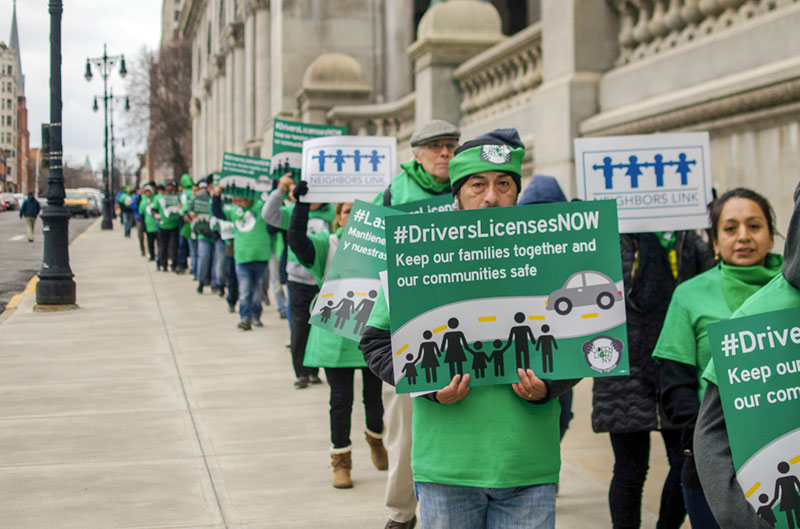 Local activists visited the state capital March 12 to support the Green Light NY: Driving Together campaign advocating for all New York residents — regardless of immigration status — to be allowed to obtain driver’s licenses.

According to the Green Light Coalition, there are 752,000 undocumented immigrant New Yorkers over the age of 16 who have not been permitted to obtain driver’s licenses. Unlicensed immigrants often risk driving because there is a lack of public transportationalternatives, according to the coalition. Without licenses, immigrants cannot register and insure their vehicles, nor do they have valid identification, which puts them at a higher risk for arrest and deportation, the coalition noted.

Activists involved in the Green Light NY: Driving Together campaign support passage of proposed legislation (bit.ly/2WVE0Iw) that would allow undocumented immigrant drivers to be properly licensed; require them to pass a driver’s test and be informed ontraffic laws; and allow them to operate a registered, inspected and insured vehicle.

Access to driver’s licenses would allow undocumented immigrants to safely drive to work, school, places of worship and to receive health care, according to information from the campaign.

“I have had the privilege of building relationships with many community members affected by the (driver’s license) issue and have seen firsthand how lack of access leads to separation from children, grave health issues and constant isolation,” said MeghanMaloney of the New York Immigration Coalition.

Maloney said more than 1,000 people from across the state dressed in green to take part in the show of support in Albany. Participants carried green posters with #DrviersLicensesNow written across the top, she said, while others marched with colorfulhandmade posters bearing such slogans as “Equal access now.”

“Upon arriving, we had a march around the capitol building, and we surrounded the building. Legislators inside could not miss the sea of green surrounding the building,” Maloney said. “The march was followed by inside activities, which were carried out bydifferent groups. We had groups flyering the capital, meeting with the governor, doing off-the-floor meetings, among other activities. The Rochester/Buffalo bus was in charge of dropping off materials to every single legislator. Materials included fact sheets anddrawings from children about the importance of access to licenses for their families.”

Maloney said she hopes the Green Light campaign’s tactics encourage members of the state Assembly and Senate to pass the legislation and for Gov. Andrew Cuomo to sign the bill this year.