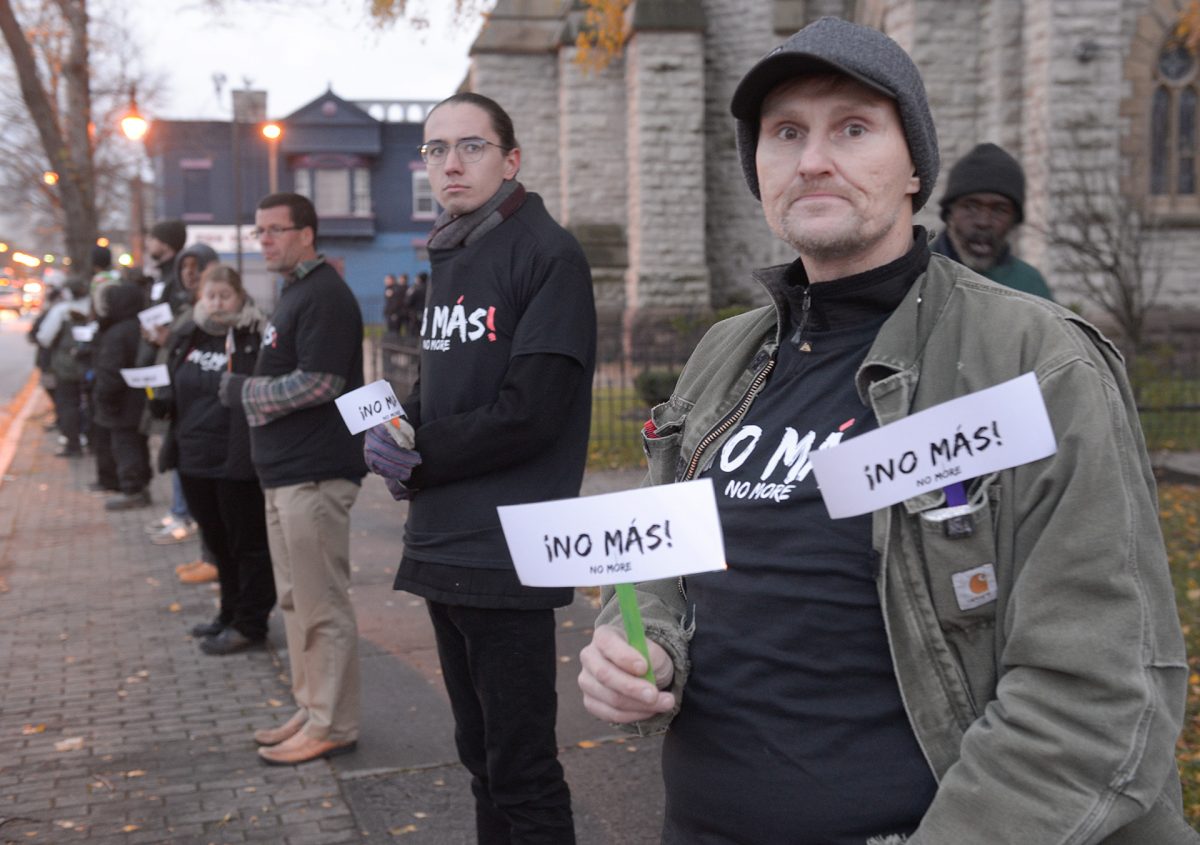 More than 120 people line North Clinton Ave in front of St. Michael's Church in Rochester on Nov. 13 , as they take part in "No Mas" They event is meant to bring neighbors and area residents together to literally stand together and show community support against the drug epidemic. (EMC Photo by John Haeger)

ROCHESTER — Paul Baker of Henrietta lost his 26-year-old son, Scot, to an overdose on Feb. 22, 2016, after Scot used heroin laced with fentanyl.

The loss of his son led Baker to join more than 120 area residents and community supporters who braved cold and snow Nov. 13 to stand silently along two blocks in front of St. Michael Church to demand an end to the epidemic plaguing the North Clinton Avenue area.

Ida Pérez, who lives on Scrantom Street and leads a block club there, organized the “No Más (No More)” demonstration as part of a community effort to work on the opioid crisis.

She and Baker had hoped for a bigger turnout and warmer weather, but both were pleased with the level of participation.

“Two blocks is good right in the heart of it all,” Baker remarked.

He and his wife have created a support program to help users find treatment, as well as a grief support group through which they have met parents from the North Clinton Avenue neighborhoods who also have lost children to drug use, he said.

“We share stories, but mainly we gather and break bread,” Baker added.

Gathering together community members in a unified message to disrupt the drug activity — even if just for an hour — was the intent of the demonstration, which was followed by a community meeting on Nov. 29, explained Pérez.

“It’s an hour a person is not out there selling, connecting somebody to a drug dealer, or an hour out there (someone is) not using,” she added.

Peréz is a member of the steering committee for Project CLEAN (Community, Law Enforcement and Assistance Network). The three-year project is a partnership of Ibero-American Development Corp.’s (IADC) Project HOPE, the Rochester Police Department and Rochester Institute of Technology’s Center for Public Safety Initiatives. Peréz recommended the committee choose the intersection of North Clinton and Clifford avenues for the demonstration because it has been at the epicenter of overdoses over the past year, according to data recently reviewed by the committee, she said.

The impetus for the “No Más” campaign took place more than a year earlier, Pérez explained, when Rudy Rivera, director of the Father Tracy Health & Wellness Center, found in an alley a cat that had been injected with heroin. Pérez said that was the final straw for Rivera, and the “No Más” idea was born.

An official campaign took shape, she added, when IADC received a $1 million grant from the U.S. Department of Justice for Project CLEAN to address the opioid problem for residents and businesses. Walks around the neighborhood followed with the message to anyone involved with heroin and opioid usage on their streets: “We love you, but we don’t love what you’re doing to the community,” Pérez said.

The area experienced 308 overdoses last year within a one-mile radius of the Clinton and Clifford avenues intersection, she noted.

Upon hearing that number, Pérez put out a community call to action on Nov. 13 and had hoped for 308 people to make a human circle in the same radius, she said. But 121 participants wearing “No Más” T-shirts or holding banners was a good way to get the message out to the entire Rochester region that the problem can no longer be tolerated, she said.

“This is not a North Clinton problem, or a Scrantom problem, or an Ida problem,” she said. “We are a community of one. It’s everyone’s problem … not just for the people who live there. This (epidemic) affects us all.”

Events held at an open-air lot across from St. Michael Church were also part of Project CLEAN’s work to provide community outreach and get more people engaged in positive activities in the neighborhood this past summer, Pérez said. Additionally, the steering committee hopes to engage more business owners who would be willing to display “No Más” posters as well as offer community events year round, she said.

The “No Más” message goes beyond wanting to rid the area of using and selling of drugs, she noted. Business owners can no longer allow loitering in front of their steps, and residents must stop closing their doors and pretending the problem doesn’t exist or fear calling police for help, she added.

“We all have to do something in order to make the situation better,” Pérez said.

She herself used to drive home from work and close her eyes to what was happening right in front of her house, she said. Then, her granddaughter got old enough to ask questions about users injecting themselves, and she knew she had to be part of finding a solution for the community, Pérez said.

“We all have to be brave,” she noted.

Having communities come together is a positive step toward a solution, noted Denise Navarette, a University of Rochester freshman. The native of New York City, who attended the “No Más” protest with a fellow student and professor, said she has seen the community’s challenges and they resonate with her.

“I do understand the struggles of how to deal with … low-income communities, which are devastated by drug use and with poverty,” she added. “Here, I can see people that are getting together and trying to make an effort, (and) I think that is the first step in trying to make change.”