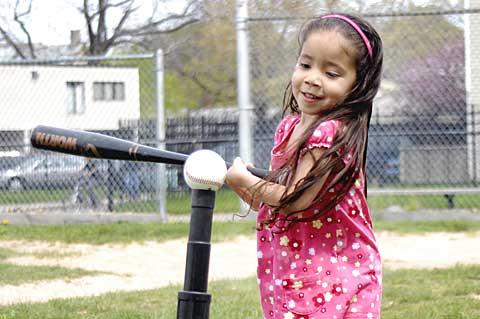 Latinos are not immune to the childhood obesity epidemic that is plaguing this country.

That is why such local groups as Ibero-American Action League and Healthi Kids are working together to make sure Latino families learn about healthier eating habits as well as providing recreation opportunities for children to just go out and play.

"Most times, kids are inside playing video games vs. being outside, being a kid and playing and jumping," said Minvera Padilla, program coordinator with Healthi Kids, a Finger Lakes Health Systems Agency initiative. "We’re trying to educate and advocate for individuals who really don’t understand sometimes because of a language barrier. Sometimes, it’s a fear of crime and violence (in neighborhood playgrounds)."

Healthi Kids is funded by the Greater Rochester Health Foundation and the Robert Wood Johnson Foundation to promote wellness and healthy eating in schools and child-care centers in addition to encouraging more mothers to breast-feed and to conduct a community survey of areas of play for children, Padilla explained. It is a "cousin" of the 5-2-1-0 Healthy Hero initiative, she added.

"We’re focused on policy and policy change in order to really make a difference in the community," said Padilla, who also has been going out into Latino neighborhoods where she grew up to educate and talk with families.

The health foundation also has created partnerships with two city schools through its Healthy Hero initiative. According to information from the foundation, one-third of children in Monroe County are overweight or obese, and more of them live in the city than the suburbs. Through the partnership, the schools have improved playground equipment, added daily recess, and incorporated yoga and movement-based learning strategies. According to the Healthi Kids website, healthikids.org/HealthFacts/ChildhoodObesity, 92 percent of elementary schools in the United States do not offer year-round physical-education classes.

Reaching families of young children is pivotal, according to information from the Centers for Disease Control and Prevention at www.cdc.gov/obesity/childhood, which shows that in 2008 low-income, preschool Hispanic children had among the highest rates of obesity at 18.5 percent, compared to non-Hispanic white children at 12 percent. The CDC also has found that over the last three decades the childhood obesity rate tripled for all children ages 6 to 11.

Elba Albert of Rochester has always strived to teach her children and grandchildren about the importance of eating such nutritious foods as vegetables and fruits to maintain good health. The Puerto Rico native also agrees that many other Latino families need that kind of information to make sure their children develop healthy eating habits.

"A lot of families are uninformed about maintaining a healthy weight," she said. "It’s not about dieting. It’s about eating healthy through nutritious, balanced meals."

Albert — along with her granddaughter — will partake in a healthy-weight-management program for Latino families in the city that was created by Ibero’s Promotores de Salud (Health Promoters). This past spring, Promotores de Salud offered a Healthy Kids Day to offer kids outdoor activities and provide families with information about healthy eating.

"It’s our community," said Maribel Torres, coordinator of Promotores de Salud. "We do it for our kids."

The participation of more than 200 people — 144 of them children — was more than Promotores de Salud could have hoped for, Torres remarked. Through that effort, about 12 families had signed up for the healthy weight program as of early June, she added.

The classes will be designed for parents, or grandparents, and their children. Discussions will focus on teaching about caloric intake and meal portions and offer healthy snack options. The health promoters who teach the classes received training from Latino Health Access, the Santa Ana, Calif., program that served as the model for Ibero’s program

"Both (kids and adults) have to participate," Torres said of the classes. "We teach healthy eating. That’s the (relatively) easy part. They also have to be active."

As with the Healthi Kids program, Ibero’s health promoters have been going into city schools to offer healthy-eating workshops but participation has been minimal, Torres observed. Feedback has shown that families don’t want to leave their homes even if it’s to get this kind of valuable information, but she and her staff will not give up, Torres added.

"You have to bring it (information) to them," she remarked. "But little by little, we’re going to show them about how unhealthy eating (can lead to) diabetes, hypertension, heart disease. It’s hard for them to come out of their routines. You have to think out of the box."