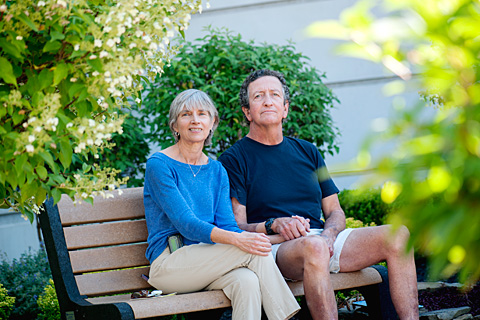 ROCHESTER — Pam Heiple could barely hold back her tears as she spoke of a thank-you letter that she received from the recipient of the kidney she donated in June.

Heiple and her husband, Mike Atkinson, are among the first pairs participating in a new kidney exchange program at the University of Rochester Medical Center. Since her kidney was not "medically compatible" with Atkinson, who was in need of a transplant, Heiple donated hers to a person at New York-Presbyterian Hospital.

The kidney Atkinson received from a 36-year-old man was transported to Rochester aboard a red-eye flight from San Francisco. This is Atkinson’s second transplant operation; his body rejected a kidney donated by his brother more than year ago, he explained.

Heiple and Atkinson were links in a chain of 10 surgeries that were all successful, said Heiple, a nurse practitioner at Highland Hospital.

Receiving a thank-you letter from William, her kidney recipient, was a surprise, she explained, as the donors in the program are not told anything about who will receive their kidneys. The man’s wife also donated a kidney.

"It is important for people to realize how wonderful it feels to make a difference in someone’s life," said Heiple, 60. "Somebody is walking around with my kidney."

The couple hope more people learn about this new program.

"I think this is a tremendous opportunity to help someone you are not medically connected to," said Atkinson, 62. "This opens up the possibility of more transplants and people to get helped off dialysis. … It eliminates the need to find a match because the system finds a match."

The kidney exchange program has been around in other hospitals in the country since 2000, and the professors who developed the algorithm for the program won a Nobel Prize in economics, he said.

"The potential impact for patients with kidney disease is enormous," Marroquin noted. "And when you consider the economic impact (for health care), it’s tremendous."

While rates of mortality have decreased for transplants of such organs as heart and liver, those rates are increasing for people on the waiting list for kidneys, Marroquin said. Nearly 120,000 people nationally are on waiting list for organs — more than 97,000 are waiting for a kidney, according to http://optn.transplant.hrsa.gov/latestData/rptData.asp.

For patients not yet part of this program, which has only been in place at Strong Memorial Hospital for less than a year, the next best option continues to be an organ from a person who has died, known as "cadaveric transplantation," he said.

But whichever transplant procedure takes place, the process is safe and thorough, noted local doctors, donors, recipients and families. Stressing the safety of the donor is especially important because of an incident that was reported over the summer at St. Joseph’s Hospital in Syracuse, advocates say.

While initial news reports stated that a woman woke up as she was being taken to a procedure to donate her organs, Rob Kochik from the Finger Lakes Donor Recovery Network said that was not the case.

"The patient was never brain dead … we were not even close to recovering organs from that patient," said Kochik, the network’s executive director. "When it was determined her condition changed, all procedures related to preparation for organ donation stopped. We were no longer part of that process."

Fortunately for the organization, people who support organ donation remain supportive, he said, adding that they understand that the primary role of medical personnel is to save lives.

The Syracuse case "just points out (the need for) our continued efforts to try and help the public be as informed as we possibly can — to get the important facts out," Kochik said.

Anyone considering organ donation should inform their families, one of the most important steps they can take, he said.

Beyond that, they should consider registering through the network’s registry or by signing their driver’s license, he added. In New York, new legislation called "Lauren’s Law" requires that everyone actively consider that step when they renew their licenses, Kochik said.

Prior to the law’s passage, a person renewing his or her license could skip signing the space required to approve of organ donation. Now, a person will need to check a box next to either "yes" or "skip" instead of leaving the signature space blank, he said.

"The question is carefully worded to give everyone the opportunity to say yes or, if they’re not ready, to skip that question," Kochik said. "We think that will increase (organ donation) number enrollments. We want to make it more efficient."

The legislation again highlights the importance of taking the time to think about and discuss this difficult topic, he said. But a person who takes the step to register also makes the decision easier for their families if that situation arises, Kochik said.

"You have to think about this … that I don’t want my family to be burdened with that decision," he added. "I don’t think we (donor organizations) have demonstrated how amazing it (organ donation) is. … Each of us that makes that personal decision can save up to eight lives."

Helene Ehmann has lived the trauma and "gift of life" of donating a loved one’s organs. Her son, Scott Conrad, died of a drug overdose on March 10, 2010. He was 29.

Because her son had spoken to his siblings and registered as a donor, they were able to donate his kidneys, liver and heart when doctors informed the family that, after a multitude of tests, he was determined to be brain dead, Ehmann explained.

"That’s why we try to tell everybody how important it is to have all those discussions before (such a tragedy strikes)," she said. "Because none of us know. … And when you’re in crisis, your mind is going all ways."

Faith has given her strength to get through the loss, and the sister of one of the kidney recipients even attended the funeral Mass at the former St. Thomas the Apostle Church in Irondequoit, said Ehmann. She told the family her brother had been on dialysis for more than six years as a diabetic since childhood, Ehmann said, and since the transplant was "doing fabulous."

They were able to make the "heartwarming" connection through mutual friends, she added.

"We see each other," Ehmann said. "I grieve every day for Scott, but I know he died a hero."

That message of hope is what Ehmann, a nurse with Visiting Nurse Service, offers when she gives talks about organ donation for hospitals or participates in health fairs.

"Nothing makes the loss easier," she said. "Not a day goes by that I don’t grieve. But we have to put grief in its place. It’s just a wonderful gift to give someone. … And there are so many people waiting who die every day because there are no organs."