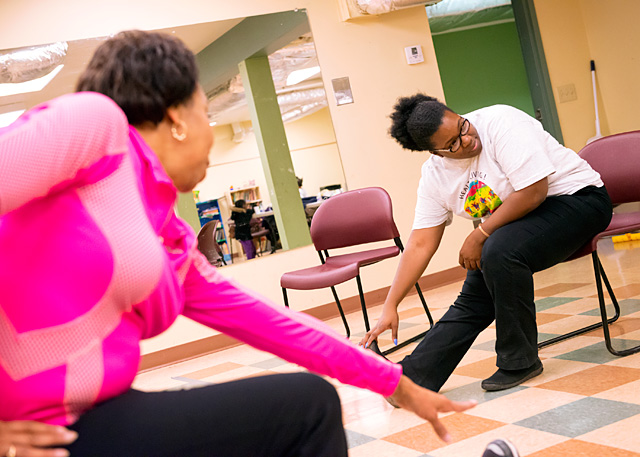 ROCHESTER — With the song "We Are Family" blaring from a small boombox, the three young moms and their children who live at Monica Place apartments recently stepped, kicked and marched toward a healthier future.

Removing barriers to a healthy lifestyle by offering nutrition and fitness classes where busy families live is the foundation of the University of Rochester’s Center for Community Health program.

Candice Lucas, director of community health services for the Center for Community Health, said the center’s Family, Food and Fun program is now in the second year of a three-year, $322,000 grant from the Greater Rochester Health Foundation. The 16-week program serves residents at city housing complexes, thus helping families overcomes obstacles of having to arrange child care and transportation, she said.

Khendaijah Barnes, who brought two of her three children to a Nov. 7 session at Monica Place, said she registered her family for the Family, Food and Fun program to continue learning how to eat healthier and stay active.

"Why not? It’s free. It’s here," she said. "Some people may not have a car and may want information, but they can’t get there. This is an opportunity to present information to them. … So they can make better decisions for themselves and their kids."

"The idea is this will build community and people will encourage each other," Lucas added. "They can do things outside of the program as well. Seeing neighbors provides peer-to-peer encouragement. They can ask, ”Are you going to program?’ or, ‘I didn’t see you last night.’ They’ll come in and tell us such and such isn’t here because something happened. That’s the whole premise behind (the program)."

Participating as a family in the twice-a-week program also helps children establish good eating and exercise habits, Barnes noted. The Nov. 7 session began with a group activity of choosing slips of paper from a box and naming a fruit or vegetable with the characteristic named on the paper, such as a lemon for the word yellow.

In the program’s first year, more than 80 families at four apartment complexes — Wilson Commencement, Seneca Manor Apartments, Lena Gantt Estates and Lexington Court Apartments — registered to participate, Lucas said. All four are operated by the Rochester Housing Authority, which helps the UR center with outreach and recruitment of families, said Lucas Santana, who coordinates recruitment. The agency Foodlink is another community partner with the program, and participants earn bucks they can use at Foodlink’s curbside markets, Lucas said.

"We’re trying to get to different areas of the city," Lucas said. "The program fits in to (the housing authority’s) goals as well, since part of RHA’s work is self-sufficiency. Living healthy is part of that."

Santana said the community partnerships provide the ideal settings for recruitment. He can attend meetings of partner organizations or set up tables at their events, where they are seeking information on new programs, Santana said. He spoke with all of the Monica Place participants at a tenant meeting.

More challenging, he said, is going door to door at the apartment complexes, which he also has done.

"People are not (always) receptive to opening the door and hearing me out," he said.

But once he has established connections and recruited residents, Santana said he serves as the liaison between the program and the UR center.

"I build the relationship with the resident," he said.

Residents will see him in the building on the day of a session and tell him they’re coming, said Santana, who also assists during sessions and takes part in the fitness portions, as he did on Nov. 7 at Monica Place.

"I serve as the point person of encouragement," he said. "I try to make it fun so they don’t see it as exercise."

Lucas said the program includes questionnaires about diet and fitness habits at the start and at the end of the program. Each weekly session includes nutrition and fitness activities, she said, and the length of the fitness component gradually increases for participants from week to week.

Data gathered through the questionnaires indicate that among the biggest changes residents have noted after participating in the program is a decrease in the number of fast-food stops and an increase in the number of vegetables and fruits they eat, she said. During the Nov. 7 session, Latifah Jenkins proudly told Santana and Yvette Thomas, a nutrition consultant and fitness instructor with the program, that she had chosen for lunch that day a small sub with turkey, lettuce and tomato, as opposed to the 12-inch sandwich she would have eaten in the past.

Once the program concludes, Lucas said, she and Santana conduct follow-up meetings with the families a couple of weeks, six months and a year later, she said. They also are collecting data on the changes families are making in terms of diet and exercise to report back to the Greater Rochester Health Foundation, Lucas said.

"We’re teaching families how to change their lifestyles and how to sustain (the changes) after the program is over," she noted.

While feedback has been positive, residents’ participation in the program remains a challenge, since it is both free and optional, Santana said. But he noted that those who stick with it say they wish their neighbors also could participate. The program aims to reach 12 different sites, Santana said, so there are no plans to return to a site after the follow-up sessions are complete. The idea is for participating families to support each other and pass on the information to other families in the housing complexes, although program staff would remain available to the residents for information or questions, said Lucas.

"My response is, ‘You’ve gone through the program. You’re the messenger, and you can help me recruit people,’" he said.