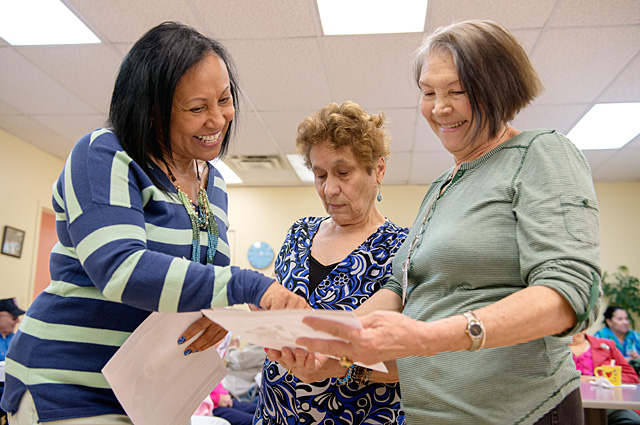 ROCHESTER — Carmen Ruiz and Luz Rodríguez sat side by side as they stepped and moved through a series of chair exercises at Ibero-American Action League’s Centro de Oro.

Rodríguez made sure Ruiz knew what move to do next, because Ruiz could not see the screen very well during the May 19 session that is part of a community initiative to improve Latino seniors’ diabetes and hypertension management.

The interaction between the two women also was a perfect example of the fun atmosphere they said draws them to the center. Both of them have high blood pressure.

The Ibero program is one of six initiatives being funded by Excellus Blue Cross/Blue Shield for a campaign to boost community health and medication adherence, said Bob Thompson, vice president of Excellus’ community health engagement.

After just a few months in the program, Ruiz said that she has lost about eight pounds and is eating more salads and exercising more. Both of them have stopped eating fried foods, they said.

Elisa DeJesus, Ibero’s chief of family services division, said that the agency would like to reach more Latino seniors in the community, since Centro de Oro membership is not required to participate in the Ibero program. What is required is that participants be at least age 60 and have either hypertension or diabetes, DeJesus added.

The program includes exercise, including having participants maintain a log of their week-to-week activity, as well as cooking demonstrations and sharing of healthy recipes for traditional foods, explained Marie Bell, a nurse at Strong Memorial Hospital who is a professor of nursing at Nazareth College. She has been volunteering at Ibero for several years by offering weekly blood-pressure and glucose screenings, Bell said. So, it was a natural fit for her to lead the new health sessions, DeJesus added.

For the new program, she also educates the seniors about portion control, added Bell, who speaks some Spanish. The seniors each receive a plate that has bigger compartments for vegetables and fruit than grains or meat to help guide them when they are home preparing their own meals, she said.

Each participant also receives a pedometer, said Bell and DeJesus.

Carmen Seda, a Puerto Rico native who has lived in Rochester for more than 50 years, said that she logs her walks on her activity sheet. She walks for an hour every Saturday and also walks to the store sometimes to help control her hypertension and diabetes.

"This (program) has helped a lot of people," she said. "It energizes us to keep doing better. We are very happy."

Thompson said that Ibero was among the 20 community agencies he interviewed when deciding which programs to fund through Excellus’ community health campaign. The local chapters of the American Heart Association and the American Diabetes Association also are supporting the campaign’s effort.

"We had worked extensively with Ibero and … we wanted to reach the Spanish-speaking community," Thompson said as to why Ibero’s program was chosen.

Ibero’s program also was chosen because Hispanics have higher prevalence of hypertension and diabetes, he said, and they also experience language barriers in receiving proper care and disease management.

"We (Excellus) as a community do some things in Spanish," Thompson added. "But we need to learn more things and do them better."

"She is getting the word out," she said. "This program is an enhancement to services we have here already. Now, we want people who don’t come (to Centro de Oro) and can benefit."

By focusing on the older Latino population at Ibero, Excellus also is able to try out a small pilot model and see if the program can be expanded, Thompson said.

With Latinos, many of the traditional foods exacerbate the two conditions that the initiative is focused on, which is why the initiative also includes the three-prong approach of preparing healthier dishes, portion control and medication management, he noted.

"Learning new ways to prepare them (foods) and make them healthier … allows individuals to (have) what they culturally know and what they want culturally," he added.

"The idea is for them to learn to manage their diabetes and live life with diabetes through incorporating more healthy foods," DeJesus added.

Since January, about 29 seniors have enrolled in the program, with an average attendance of 24 to 25 seniors, she said. Bell said that she also is maintaining data on the participants’ vitals to see how they progress during the program.

"We’re practicing health promotion," Bell added. "If their health is better, they are less likely go to hospital for emergency situations."