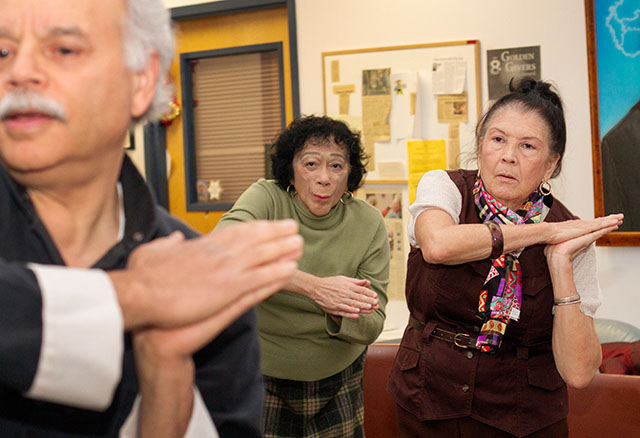 Bertha Bu Melian (right) and Aliza Gutierrez (center) learn tai chi from Carmelo Ramos during one of several sessions offered for caretakers of patients with Alzheimer's disease during "El Arte de Cuidar" Nov. 14 at The Community Place. Ramos, who has been teaching tai chi for over 40 years, said that activity is thought to slow the progression of Alzheimer's disease.

Suffering from Alzheimer’s, her mother needs help with all her basic needs. Rivera prepares all of her food, bathes her and gets her dressed in the morning. While she is fortunate to have a job where she can bring her mother with her, caring for her mother at home can be trying at times.

"It’s very difficult," Rivera explained during a Nov. 21 interview at Ibero-American Action League’s Centro de Oro, where she is director.

"On the bad days, I have to literally get in my car and cry," she said. "And I know it’s not her fault."

Rivera also is lucky to have information about community resources available to caregivers such as herself. But many Latinos do not, which is why Ibero, Catholic Family Center, the Rochester office of the Alzheimer’s Association and the Community Place of Rochester recently hosted a conference for caregivers of loved ones with Alzheimer’s or dementia.

All the information during the Nov. 14 caregiver conference, which was held at The Community Place, was presented in Spanish. The event included workshops on music therapy, tai chi and forums with agencies that provide support for caregivers.

The attendance of about 150 people showed how important it is to support caregivers in the Latino community, organizers said.

The information is invaluable to Latino families, who tend to care for these family members at home vs. placing them in a nursing home, said Dr. Luis Postigo, who provides medical care for elderly in their homes.

"For Latinos … family comes first," he said. "They try to keep parents and loved ones at home, even with all the problems and challenges that brings."

In a national survey that looked only at people 70 years of age or older, 44 percent of Latinos were found to receive primary care at home from family members, compared to 34 percent of blacks and 25 percent of non-Hispanic whites, according to information from the American Psychological Association at www.apa.org. The association’s report also stated that Hispanic caregivers were more likely to report worse physical health and feelings of depression.

"Education, care and support are key in the (management of) this disease, " said Keith Harrington, director of program and services at the Alzheimer’s Association. "We provide respite care for free for people with dementia to give caregivers a break."

And providing such support is essential with 16 million people projected to be living with Alzheimer’s in the next three decades, and Hispanics 1.5 percent more likely to suffer from the disease, Harrington explained. Hispanics have high rates of diabetes, high blood pressure and high cholesterol, and those kinds of vascular diseases pose a risk for developing Alzheimer’s and stroke-related dementia, according to www.alz.org.

The number of Latinos with Alzheimer’s is expected to increase 600 percent by 2050, the website stated, with 70 percent of Alzheimer’s patients currently cared for at home.

Dr. Luis G Postigo speaks about what caregivers can do to get a break while caring for patients with Alzheimer’s disease during "El Arte de Cuidar," a conference held at The Community Place Nov. 14. Postigo makes house calls to serve Alzheimer’s patients.

During his keynote address at the Nov. 14 conference, Postigo also explained that caregivers, especially those who are employed outside the home, can access many local services to ease the stress of providing home care. Those services include Meals on Wheels, mobile pharmacies and home health aides who speak Spanish. Additionally, such programs as Centro de Oro provide a place for family members to go during the day, he said. And families can set up alarm systems to keep their loved ones safe and give everyone peace of mind, Postigo said.

Rivera noted that families should ensure that aides are well trained and qualified; otherwise, it could increase the burden on caregivers. A support group for Latino caregivers also would be helpful, she added, which is something Harrington said the association is working on.

Lilian Vargas, a native of the Dominican Republic who has lived in Rochester for two decades, said that she wished she had known about all the resources available when she took care of her husband, Florencio. He died five years ago after suffering from Alzheimer’s for three years, she said.

The alarm system that Postigo spoke of would have helped her greatly, she said. She recalled tying his legs to hers to make sure he didn’t leave the house in the middle of the night.

"I didn’t have this information," she said. "I would be so careful, and yet he would leave the house."

Another unique challenge for Latino caregivers is getting family members diagnosed, since they may not trust doctors, said Nanette Friedman from the Alzheimer’s Association. That is why the association began contracting with CFC’s Estrella (Star) program several years ago to provide information to this population in Spanish.

Some of that works takes place with participants in Centro de Oro, explained Estella Vélez Upegui, supervisor of CFC’s aging and adult services’ Star program. For example, she and Andres Fernández provide music therapy once a week for the seniors. They play Spanish songs from the era of the seniors’ youths.

The seniors, who keep rhythm with small bongos and maracas provided by Vélez Upegui, also got up and danced during a Nov. 21 session. The idea is to bring a little joy, especially for those seniors living with Alzheimer’s, she said. Additionally, such engaging activities provide peace of mind for caregivers and alleviates some of the pressure they feel daily, she said.

"The goal is to improve quality of life (for all the family members)", noted Upegui.

EDITOR’S NOTE: For more information in Spanish about the signs of Alzheimer’s and local support services, visit www.alz.org/espanol/about/que_es_la_enfermedad_de_alzheimer.asp.