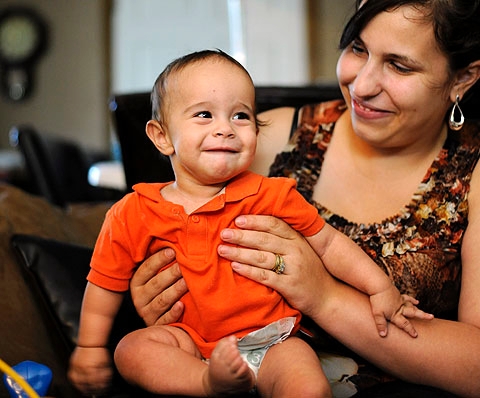 ROCHESTER — Jovani Perez appears like any other 10-month-old baby: He smiles at visitors and likes to move around on the living room floor as he plays with his 5-year-old sister, Jariana.

But Jovani was born with Eagle-Barrett syndrome, which affects his kidneys and means he will need a kidney transplant in the next few years.

"It’s a waiting game for when his body outgrows his kidney," said his mother, Amber Perez, during a June 13 interview at their home on Westmount Street. "It’s scary."

While she and her husband had been aware that Jovani’s urinary tract was partially blocked in vitro, they didn’t expect any kind of complications because they were told it would likely be corrected after birth, explained Amber Perez, 24. Also, they had discovered the blockage was a genetic predisposition that did not result in any further complications for other family members, she added.

But when Jovani was born, they had little time to enjoy the birth of their second child. Only hours later, the doctors had diagnosed him with Eagle-Barrett and he spent the next month in the neonatal intensive care unit at Strong Memorial Hospital, Amber Perez said.

"It was and is tough," noted Ben Perez. "You see stuff on TV … and you don’t even process the fact that it could even happen to you."

Eagle-Barrett syndrome is a rare condition that occurs in 1 in 40,000 babies — 95 percent of who are boys, according to www.prunebelly.org/#/what-is-pbs. These babies’ abdominal muscles don’t develop, which causes a wrinkled appearance of the belly, according to www.ncbi.nlm.nih.gov/pubmedhealth/PMH0002249. Urinary tract problems, delays in sitting and walking, heart and intestinal difficulties, and underdeveloped lungs are associated with the condition.

Jovani is cared for by a team of doctors including a nephrologist for his kidneys, a urologist and a gastroenterologist as well as his pediatrician, said Amber Perez. The frequency of his doctor visits recently improved from every two weeks to once a month, the couple said.

The family also has seen improvement in Jovani’s food digestion, Amber Perez explained. Up until the end of May, Jovani would throw up about 10 to 15 times and was nourished through a nasal feeding tube, she added. A recent change in one of the six medications he takes daily has helped him keep food down, she said. Now, he eats baby food and the parents attach a feeding tube through his stomach only at night.

But Jovani, who will celebrate his first birthday in September, remains on a restricted diet and cannot eat anything with sodium, potassium or phosphorous, said Amber Perez. While his stomach muscles are weak, Jovani does try to crawl and sit up, she said.

"It’s funny because people look at him and think he’s chubby," Amber Perez said. "You wouldn’t know anything is wrong."

His kidneys, though, only have 25 percent of their function, she said. Family members are hoping that one of them can be his kidney donor because it increases his chance of transplant success and extends the viability of the kidney, Amber Perez explained. Organs from live donors last about twice as long as the seven years that organs from cadavers last, she said.

The family also was fortunate enough to have been referred to the Children’s Organ Transplant Association, which has helped coordinate fundraisers for Jovani’s medical expenses. The organization estimated Amber and Ben would need about $55,000 for out-of-pocket expenses and travel costs for Jovani’s surgery, which will be performed at Children’s Hospital of Boston if it happens before he turns 5, Amber Perez said. If it happens at a later age, the surgery can be performed at Golisano Children’s Hospital at the University of Rochester Medical Center.

"It’s scary to think how much more costs (we face)," she noted. "It’s nice to have this safety net."

Amber Perez’s aunts and her mother, Laurie Siegel, have led those fundraising efforts as well as helped with baby-sitting for Jariana during Jovani’s hospital stays.

Siegel calls her grandson "Nana’s miracle baby" because the condition affects both his kidneys, which makes his ability to thrive even more amazing, she said in an e-mail. After she took on the role of community coordinator for Jovani’s fundraisers, Siegel said that she recruited a team of 10 volunteers, which include her four sisters, to create and organize community events. The association has been a great resource and even created a website to allow for online donations, she added Siegel.

And Siegel and the team have raised nearly half of the $55,000 goal, according to www.cotaforjovanip.com/WaysToHelpEven total strangers have donated, Siegel said, because they have seen Jovani’s picture in news reports about one of the fundraisers. Events have included a bowl-a-thon and flower sale at the Rochester Public Market.

"There are a lot of rules and regulations of what can and cannot be done, and it’s been my role to make sure that, as a group, we adhere to that," Siegel noted of the fundraising activities. "I think having such a great response from the community has helped me keep my sanity."

Another source of emotional support comes from a group of mothers of children with kidney disease that she joined at Strong, said Amber Perez. Her husband said that he tries to stay "realistic" about Jovani’s prognosis, but remains hopeful that safer options will be available in the future instead of a potential second transplant once Jovani reaches adulthood.