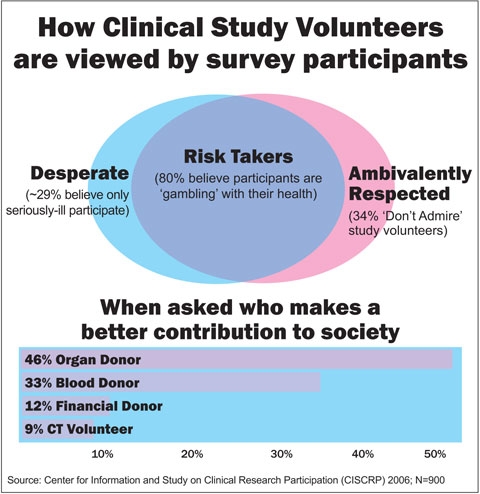 ROCHESTER — Attitudes have begun to change but the need for greater participation of minority groups in clinical trials remains the same since the University of Rochester Medical Center began a marketing campaign about two years ago.

"There seems to be less disparity between minorities and nonminorities about their attitudes toward research in general," said Ann Dozier, an associate professor in the division of social and behavioral medicine in the university’s department of community and preventive medicine. "They trust in the way research is run and have in general a positive attitude about researchers. … That’s the start of it (more participation)."

Many of the respondents in a survey the university conducted last fall also felt that clinical research does benefit their health and lifestyle, which is a great stepping-stone to getting some of those same people to enroll in clinical trials, Dozier noted.

Sometimes, the challenge is as simple as people not being asked to participate, she added. The university also is trying to work with doctor’s offices to get them to encourage patients to participate when studies apply to their conditions.

"Overall, the number of studies that are achieving recruitment targets have not gone up," she said since the university’s marketing campaign began more than two years ago. "Yes, we still have a problem. We haven’t been able to void our message as widely or as much as I’d like to have done."

The university should reach out to such clinics as the Clinton Family Health Center to get their message to the Latino community, recommended Maria Delgado of Spencerport.

She participated in a sleep study at the university after her sister saw an advertisement — in English, she noted — and told her about it, Delgado explained. She hasn’t seen such ads directed to Latinos.

"That’s probably why they’re not getting phone calls from a lot of people," she said, noting that taking part in the sleep study "was really beneficial. I would encourage them (Latinos) to do it."

Currently across the United States, many research studies end earlier than necessary because of too few volunteers, according to information at www.researchmatch.org. ResearchMatch is a collaboration between a large network of academic institutions that serves as a registry for clinical research. It is funded by the National Center for Research Resources, which is affiliated with the National Institutes of Health. The site serves as a resource to connect potential trial participants with studies for which they may qualify.

Officials from the university’s Center for Community Health announced their clinical-trial initiative early in 2009. Their goal has been to boost clinical-trial participation by underrepresented minority groups — including African-Americans and Latinos — as a way to better reflect the community and improve its overall health.

"We need participation across the entire spectrum," Dozier remarked. "We need recruitment and retention across all social-economic groups. … But historically with minorities, participation hasn’t necessarily been the best. There’s suspicion of institutions, suspicion of medicine generally and suspicion about research."

Another challenge is that Hispanics in general don’t turn to the medical community for their ailments, Delgado noted. And when they do, they want to go just to their primary provider, she added.

"We don’t like to complain unless something detrimental is wrong with us," Delgado remarked. "That’s why a lot of people don’t respond (to trials). We tend to use a lot of teas and herbal remedies. That’s what I did."

According to www.healthresearch.urmc.edu, about 1,000 trials are underway at any given time overseen by more than 375 researchers and scientists. The projects helped provide new drugs, medical devices, tests and treatments for such conditions as cancer, heart disease, HIV/AIDS and asthma.

The university also hopes to create its own registry system akin to the ResearchMatch system on the basis of the survey results that indicated the lack of access to technology for some in the minority populations that are being targeted, Dozier explained. Additionally, officials have translated a brochure about research into Spanish, she said.

"There’s a sense that we need to create something for people locally, for people who may not have e-mail access, who may not want to submit their names to a national (registry) but may want to do something locally," Dozier added. "It takes time for all changes to be implemented. But our intent is to get to the point to have information about resources and a range of research projects in language that is understandable and available electronically or through a person. Like the auto insurance commercial says, ‘Technology when you want it, people when you don’t.’"

EDITOR’S NOTE: To obtain more information in Spanish, a pamphlet is available here.