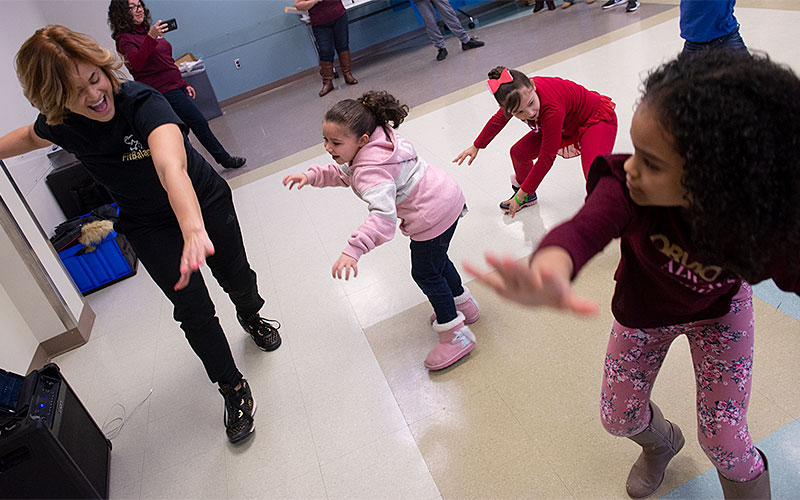 ROCHESTER — An annual event sponsored by Latinas Unidas gave community members a chance to gather for a cultural celebration and receive health information at the same time.

“What they do for the kids and how they are introduced to the culture of Three Kings in addition to the vendors makes for a great networking opportunity,” said Dorcas Romano, who, along with her two children, attended the event for the first time. Romano told El Mensajero Católico that she planned to take part next year.

The event also featured such resources as legal aid information provided by Law NY and information on the 2020 Census.

The fair also provided such children’s activities as arts and crafts, a karate demonstration by second-degree black belt Mary Méndez and a visit from the Three Kings.

Close to 20 children sat patiently on the gym floor of the recreation center awaiting the arrival of the Three Kings. They were greeted by Raquel Serrano, one of the board members from Latinas Unidas. To get into character, she was dressed in a traditional Middle Eastern outfit as she read the story of the Three Kings to the children in Spanish, occasionally translating key words from the story like Bethlehem, Mary, Joseph and kings.

While reading the story, the Three Kings made an appearance as each of their names in the story were announced. They each walked around the children and acted out the story as it was read.

Serrano also took the time to share her story about growing up in Añasco, Puerto Rico, and the tradition that she participated in order to receive gifts from the Three Kings.

“I would get grass from the patio and put it in my shoe box and put it under my bed, but I also got a bowl of water, because I was worried the horses (camels) would be thirsty,” she recalled.

Children across Puerto Rico take part in this tradition every year on Jan. 6, and it is the equivalent of leaving out milk and cookies for Santa, Serrano noted.

“The Latinas Unidas made a phone call from far away just for you guys. The Kings arrived at the ROC airport just to get here,” she joked.

The children excitedly formed three lines in order to receive toys. According to Joann Santos-Santiago, president of Latinas Unidas, the toys had been provided by Toys for Tots.

Santos-Santiago said that the community response to Nuestra Cultura, Nuestra Salud was great, with many organizations reaching out to Latinas Unidas this year asking to participate. In light of this, the organization hopes to make the cultural/health fair even larger next year. Santos-Santiago hopes the organization will be able to add beauty/spa elements and focus on both internal and external beauty.

“Who takes care of us? We as women prepare Christmas, Thanksgiving and other holidays, so we need an event that also celebrates us,” she said.