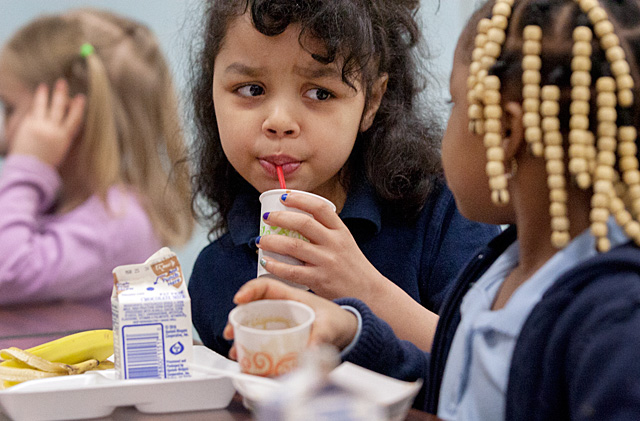 Kindergartener Gabrielle Mcbride drinks a smoothie while visiting with classmate Nakiyah Calok during lunch at James P.B. Duffy School No. 12 in Rochester March 19. As part of the "Edible Education" program, representatives from the Good Food Collective gave students the smoothies, which were made of peaches, spinach, strawberries and blueberries.

ROCHESTER — The group of kindergartners raised their hands and shouted, "Me! Me!" as volunteers passed around trays of small cups filled with fruit smoothies at James P.B. Duffy School No. 12.

The secret ingredient in those smoothies? Spinach, explained Rachel Larson, the school’s coordinator for the "Edible Education" program created with a grant from the Greater Rochester Health Foundation.

The enthusiasm, however, waned a bit for some of the students once they tried their drinks.

"It tastes funny," said 5-year-old Shamya Polanco-Bell, even though she said she likes many fruits and vegetables.

"It’s nasty," said Lucia Vega, a 7-year-old second-grader. "I already have a can of vegetables at home. … And I always take a vitamin to help me get strong."

"It was delicious," he said. "I definitely love tomatoes, strawberries, mango, peaches, oranges … and apples. I don’t really like broccoli and carrots."

While promoting the health benefits of a produce-filled diet is the goal, developing a taste for a variety of fruits and vegetables that Jason demonstrated also is part of changing eating habits, explained Vicki Hartman from Headwater Foods. The company, which runs a consumer food-share called Good Food, is providing the produce samples through the Edible Education grant.

Hartman said that she and her husband, Chris, support the program’s goals to reverse some of the negative health trends for city students — including child obesity and related health conditions.

Without improved access to "fresh, wholesome foods, they miss out on not only the health benefits but the flavors. That’s what this is about," she said of the program.

The Edible Education program is one of eight three-year initiatives promoting healthy eating and increased physical activity supported by a $2.6 million grant from the health foundation, explained Heidi Burke, a senior program officer. The financial support also includes training provided by the foundation, she said.

Changing habits will take time, Burke noted, which is why each school is tailoring the program to its school population. The foundation will track changes in diet through surveys of students and parents, she added.

"Some of the measures we’re looking for are time and quality spent on physical activities, the minutes kids are getting for recess, the amount of action-based learning happening in the classroom, and how much activity is provided in P.E. and afterschool," she said.

Larson said that the grant provides professional development for teachers, such as how to connect math and movement.

The focus is "action-based learning, which is all about moving and connecting gross-motor development with cognitive development," she said.

The program also gives students the opportunity to learn how their food preferences have an impact on local farmers, which gives them a sense of empowerment, said Melissa Parrish, a volunteer who also is a substitute teacher at School No. 12.

Before passing out the first round of smoothies to second- and third-graders during their lunch period, Hartman explained that during the first Edible Education session in January, a student vote indicated that they liked Empire Red apples. As a result, more of those trees were being planted on Rochester-area farms.

"Their opinions matter," Parrish said. "We need more of these connections for students and for teachers. … Even during lunchtime, there are always teachable moments. Things that can carry over to the classroom."

Whitney Brown, whose daughter is a kindergartner at the school, called the Edible Education program "the greatest thing in the world."

Too many kids only think of snacks as the bags of potato chips or candy they find in the corner store, as is the case for her family, Brown said.

She hopes to someday open a small store front with fresh produce at a reasonable cost to get more kids to choose apples over chips, she added.

"Something needs to (change), especially in our neighborhoods," she remarked.