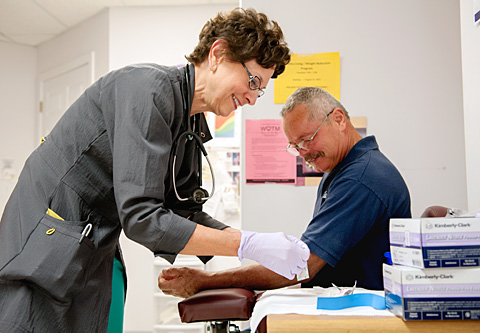 Health systems in the Rochester region have collaborated with insurance companies, universities and community organizations to prevent a primary care doctor shortage that exists nationally and is projected to increase.

As a result of those collaborations, new models of care have been developed as well as loan-forgiveness and recruitment programs for medical students to boost primary care access for patients.

"Anything we can do to allow primary care physicians to focus on the whole patient as opposed to just the body part that hurts that day (is good)," said Dr. Wallace Johnson, director of the University of Rochester Medical Center’s Center for Primary Care. "If you change the insurance system and overall reimbursement system to incentivize patients and physicians to focus on preventive care and health maintenance, the patient is going to be healthier and the primary care doctor is going to be happier."

"Clearly, this is a national pattern," Lustick said.

The tide turned for a variety of reasons, Johnson explained, which include lower insurance company reimbursements for patient care, restrictions that require patients to come into already stressed, high-volume practices for care and difficulty in funding for innovations in primary care processes.

"One of my professors used to say that the U.S. has one of the most fabulous health-care systems in the world, you just have to fall off a cliff to access it," said Dianne Cooney-Miner, dean of the Wegmans School of Nursing at St. John Fisher College in Pittsford. "There has been really very little will to look at prevention until more recently."

With increasing numbers of patients accessing health exchanges this fall as part of the Affordable Care Act, the area is prepared with the new models of care that have already been put into practice, said Cooney-Miner and Johnson.

"Right now, we have about 40 million Americans who don’t have health care. And of those that do, they have trouble finding primary care providers," said Cooney-Miner. "Once we open the door (to health insurance), as a country, we will be challenged to find new and innovative models of care."

With nearly 209,000 primary care physicians in 2010, the nation will require almost 52,000 additional primary care physicians by 2025, according to the Annals of Family Medicine, www.annfammed.org/content/10/6/503.full. An estimated 33,000 doctors will be needed to meet population growth, about 10,000 because of the "graying of America," and about 8,000 to meet insurance expansion.

"We need a strong primary care network," Lustick noted. "So we wanted to get in front of it (primary care access) before there was a shortage (locally)."

Cooney-Miner said that years ago the nursing school began studying ways to improve primary care delivery. Because of that focus, the school approached Excellus with a proposal for a primary care center staffed by nurse practitioners at Rochester’s St. Joseph’s Neighborhood Center. The primary care center, funded by a $1 million grant from the insurance company, opened this past spring.

"We are providing funding to build a model practice, in particular to serve an underserved population," said Lustick. "The practice has a significant mental-health component along with other basic primary care services."

"The center has a long-standing commitment in delivering integrated health care," said Cooney-Miner. "There’s mental (health) services, social and emotional health (care). … That holistic model is very much in concert with the way we think of health care in the school of nursing."

In addition to the new center at St. Joseph’s, Excellus worked with MVP to create a "medical home" concept to improve primary care within the URMC, Unity and Rochester General Hospital health systems for patients with such chronic conditions as diabetes and high-blood pressure, Lustick said.

Johnson said that with the "medical home" model, a team of caregivers monitors the patient’s condition, including reaching out to the patient at home.

"These changes are going to allow primary care practitioners to be more flexible in terms of the number of patients that they’re going to care for, but I’m not saying they’re going to be able to take more patients," he said. "But it’s a first step toward an ability to care for patients outside of traditional office visits."

The goal of this model and the new insurance exchanges will be to boost the number of patients receiving preventive care — keeping more people out of the emergency room and reducing the number of unnecessary hospitalizations, he added.

"Everyone says medical care is expensive," Johnson remarked. "But what really drives cost is ER visits and hospitalizations … any number of which could have been prevented with better coordinated care in the community."

Excellus also has worked with the Rochester Business Association to develop a loan forgiveness program to recruit more medical students into primary care, Lustick explained. The RBA offers a $120,000 reprieve for a four-year commitment to work in the Rochester area, he said.

"While this doesn’t solve overall projections of future shortages, it strengthens our ability to attract and retain the best folks out there coming out of training and going into practice," Lustick added.

The loan program, which is now completing its second year, has been a great success, Johnson added.

"It has enabled all three health systems to recruit and retain more primary care doctors," he said.