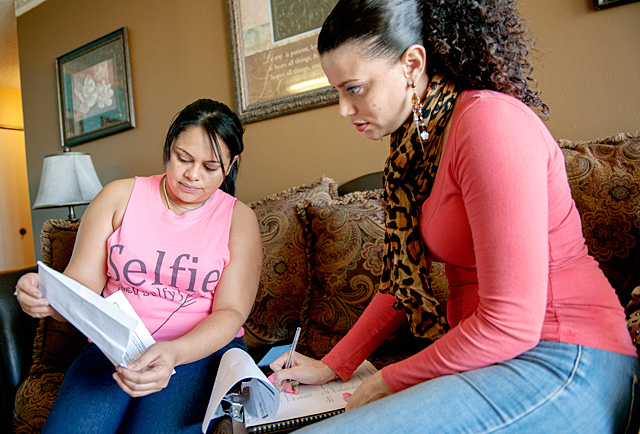 The former child-care worker has been caring for her sister’s 2-year-old child in a tidy, small apartment off Hudson Avenue almost since the child’s birth. She has a strained relationship with her sister, who rarely checks on the child and has two other children, Escalera explained.

That relationship is one of the stressors that contributes to her struggles with anxiety, depression and anger management, she said.

But Escalera said that she has come a long way since she attempted suicide in 2010. Following treatment at Rochester General Hospital and group-therapy sessions, she connected with Annette Maldonado from Ibero-American Action League this year. Maldonado is one of two staff members that comprise Ibero’s new Home Health Care program.

Escalera said that Maldonado helped her find a new therapist — her third since she began treatment — whom she has continued seeing in one-on-one sessions that began in July. Maldonado also helped her find clothing and food resources and a program for her to learn English, she said.

"She has helped me a lot," Escalera said of Maldonado. "She tells me: Whatever you need, just give me a call.’"

That kind of wraparound care is what the Health Homes’ service model is all about, explained Elisa DeJesus, vice president of the agency’s family services division. Through the model, caregivers of an individual enrolled in Medicaid communicate with one another so that all of the patient’s needs are addressed in a comprehensive manner, according to information from the New York State Department of Health at health.ny.gov/health_care. That communication funnels primarily through a "care manager," such as Maldonado, who oversees and provides access to all of the services an individual needs to assure that the patient receives everything necessary to stay healthy, out of the emergency room and out of the hospital, DeJesus said.

Health records are shared among providers so that services are not duplicated or neglected, and those services are provided through a network of organizations that include providers, health plans and community-based organizations, according to the state health department’s website. When all the services are considered collectively, they become a virtual "health home." Ibero is among the area agencies that are part of the Health Homes of Upstate New York (HHUNY) network, DeJesus said. Others include Home Care of Rochester and Catholic Family Center, she added.

Once staff is hired for a Home Health Care program, the employees begin their work by reaching out to the Medicaid patients on a list provided by the state Department of Health, DeJesus said. Finding those patients was one of the first challenges faced by Maldonado and Alicia Ostolaza, they said. Some of the patients’ phones had been disconnected or they had moved from the addresses the agency had received, noted Ostolaza. Initially, the Ibero staff connected with a third of the 150 names they received, said DeJesus.

The patients they are targeting have chronic conditions, including heart disease, diabetes and hypertension, she said. Many of them suffer from mental-health issues including bipolar disorder, schizophrenia, and anxiety or depression, Maldonado said. And only some of them are in treatment when DeJesus and Ostolaza first talk with them, since only one local program offers psychiatric care to those who speak Spanish, she noted.

"There are waiting lists (for treatment at other hospitals)," Ostolaza added.

Their job is to help these clients physically, socially and behaviorally, the Ibero staffers said. So, they make appointments and give clients appointment reminders. They make sure clients take their medications as well as try to connect them with transportation, housing, day treatment programs, counseling or other community services such as clothing or food, said Ostolaza.

If clients end up in the hospital, Ostolaza said that she and DeJesus develop discharge plans so the people don’t end up back in emergency room.

"It’s a lot of work," she said. "We do outreach, home visits. We call the pharmacy for prescriptions. We do referrals. For each client, there are hundreds of questions we have to answer."

"We are learning as we go," noted Maldonado.

Bottom line, the work is about the whole person, said Ostolaza, as some of the clients have no one else to talk to.

"They talk to me, they feel better," she said. "I feel good about that."

Connecting with this service proved to Escalera that the move to Rochester was the right one, she said. Even though she has faced some challenges, she recognizes that she and her niece have a chance at a better life here than in Puerto Rico.

"You feel safer here," she said. "And there are no agencies like Ibero over there (in Puerto Rico) with the programs that they offer."