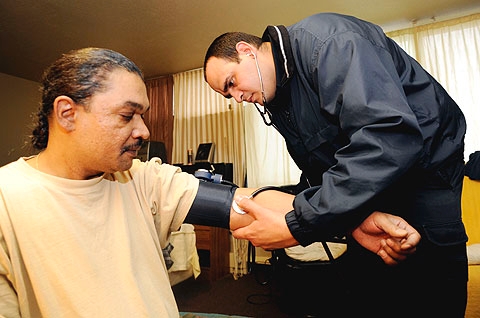 ROCHESTER — The Affordable Care Act will have a major impact on Latinos and other ethnic groups in the Rochester area and across the nation, according to local and national health experts.

"I think it’s going to provide better access and increase the quality of care," said James Sutton, a bilingual physician’s assistant with Rochester General Hospital. "And it will provide a better fail safe for people that are falling through the cracks right now."

How many of those people are falling through the cracks remains unknown. But Rochester General Hospital as a system is prepared for an influx of new patients — people in their 20s or lower-income families who make just enough to not have qualified for Medicaid in the past — at its facilities, which include the Clinton Family Health Center, added Sutton.

The Affordable Care Act will eventually provide some form of health insurance for the 32 million Americans who currently have none or are underinsured, according to information at www.whitehouse.gov/healthreform/healthcare-overview. The law is being rolled out through 2014, when a competitive insurance marketplace will offer families and small businesses the opportunity to purchase affordable care, the website states.

To help people understand all these changes, Ibero-American Action League and several other agencies across the state took part in a video and teleconference last month to help them educate their Latino communities about the law’s impact on them.

The conference is just one of the ways that Ibero has been striving to educate Latinos about the law, which was passed in 2010, explained Hilda Rosario Escher, the agency’s executive director and chief executive officer.

"Our role is to make sure that we continue to make the connections with the people that have the information so we can make it available to our community," noted Rosario Escher.

During the teleconference, Mayra Alvarez, director of public health policy for the U.S. Department of Health and Human Services’ Office of Health Reform, noted that Latinos have high rates of disparity when it comes to preventative health care and insurance coverage.

"For all the progress that we made in the last few decades in technology and medical discoveries, we know Americans are not the healthiest, especially communities of color," she said. "One in three Latinos doesn’t have access to insurance, and one in two has no consistent doctor."

To better educate these communities is the goal of her office’s outreach efforts, said Alvarez, who boiled down the legislation into four key points:

The law’s "Patient Bill of Rights," which is currently under implementation, prohibits companies from capping coverage, kicking young people off their parents’ plans and refusing to accept clients with pre-existing conditions such as asthma — a condition that is prevalent in ethnic communities, explained Alvarez.

Health care also will become more affordable as companies are forced to justify any premium increases by 10 percent or more and states are allowed to block premium hikes, she added.

"The days of insurance companies (raising) our rates in the heart of darkness is done," Alvarez remarked. "These are real changes giving Americans the peace of mind that their health dollars are going to good use."

Sutton said that RGH’s facilities already accept Medicaid so they’re not expecting a dramatic increase in patients. The bigger challenge will be the decreased reimbursements they will receive under the new law, he added.

"It’s a double whammy," said Sutton, who testified Feb. 27 before a congressional subcommittee about Monroe County’s efforts to treat blood pressure. "But it will be incumbent upon us as a health system to learn to do things more efficiently."

RGH also has begun the application process to become an accountable care organization, he added. While the details and criteria for approval are in flux, essentially the designation would allow them to care for a specific group of people, Sutton said. If approved, the designation could increase efficiency by allowing RGH, for example, to bundle services together and offer them at a lower rate, Sutton explained.

"I honestly think if we had a defined population of people … that we were in charge of, we could provide more cost-efficient care," he remarked.

That is an important goal of the Affordable Care Act, as too many families have been forced to ignore their health because of their financial situation, Alvarez said. She spoke of one mother who couldn’t afford the $30 copay for a mammogram because she was facing an array of expenses related to her daughter’s activities as a high-school senior.

"That can be repeated in every family across the country," she said. "Too many people have faced that tough choice. … But now, a wide range of preventative services will be available for free."

The availability of those services will have a huge impact on Latinos, who suffer from high rates of diabetes, obesity, heart disease and certain types of cancer, Alvarez remarked.

"Those are hitting us harder and making us sicker," she said. "And we’ve been dying quicker simply because we don’t have access to the health-care services we need."

While the "devil will be in the details," Sutton added that the new law is a good vision that he hopes will improve care for people throughout the country.

"Health insurance is your ticket into the health care system," he added. "Without it, you’re done. Otherwise, you get care in the emergency room, which is not good care."