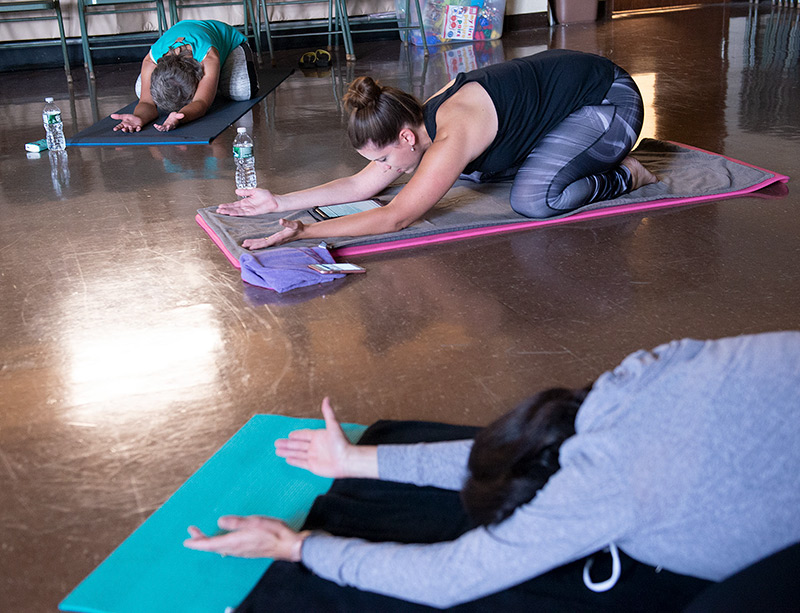 An exercise program created by two Catholic women offers a way for people to strengthen their bodies and souls at the same time.

The core-strengthening workout SoulCore, which centers around praying the rosary and reflecting on its virtues, was created by Colleen Scariano and Deanne Miller, members of Our Lady of Mount Carmel Parish in Carmel, Ind.

Scariano had turned to the rosary and exercise as sources of peace and healing after losing her father and two brothers.

“I began to run and pray the rosary at the same time,” she said in an interview with El Mensajero Católico. “Exercise was very healing to my body and my mind as well, so then when I combined the two, that combination for me was so powerful in body, mind and spirit for my journey of healing.”

Scariano also was suffering from lower-back pain, and a friend suggested that she work on her core to help with the issue. She said her search for an activity that would combine core strengthening and praying the rosary led her to develop SoulCore in August of 2012.

Six years later, Kristin Muir, a parishioner of St. Leo Church in Hilton, learned about SoulCore from her cousin. At the time, Muir had been concentrating on being healthier and exercising more.

“I was running a lot, and I started praying the rosary while I was running, just to get a two-for-one, since I am a busy mom,” she explained.

She began researching the SoulCore concept and learned that the only classes being offered in the upstate New York area at that time were in the Buffalo Diocese. She decided to attend a Buffalo-area class and was sold on the program.

“I loved it,” Muir said. “And my mom actually pushed me into it and said you have to bring this to Rochester.”

She decided to become a SoulCore leader, so she attended a two-day SoulCore discovery retreat in Florida in July of 2018. The retreats are offered around the U.S. and internationally and are designed to instruct prospective SoulCore leaders in the virtues of the program.

After completing the retreat, Muir participated in 60 days of discernment, during which she practiced the SoulCore exercises and made her consecration to Mary. She then submitted a video to Scariano and Miller to demonstrate that she was capable of all the elements required to be certified as a SoulCore leader.

After becoming a certified leader, and with the encouragement of her mother, Muir approached St. Leo with the idea of offering SoulCore classes at the church. St. Leo agreed, and classes began in September 2018 and now take place at 8 a.m. on Saturdays in the parish hall.

In addition to being offered around the U.S., Scariano and Miller said they hope to expand SoulCore internationally. They said residents of other countries have learned about SoulCore through social media and have expressed interest in the program’s exercise DVDs being made available in different languages.

A few years ago, Miller said, a SoulCore leader from Mexico City and her videographer husband filmed SoulCore’s Joyful Mysteries in Spanish.

“We do hope to get the rest of the Mysteries filmed in Spanish,” she said.