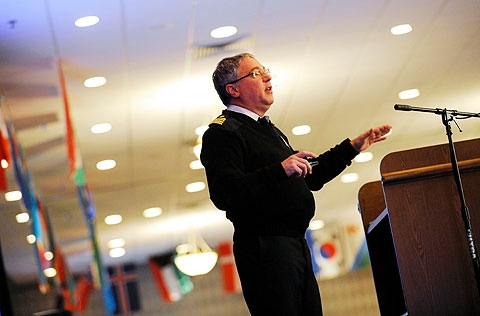 "There are no local diseases," said Dr. Patricia Walker from the University of Minnesota. "There is a body of knowledge about refugee health care. And it’s my responsibility (as a doctor) to know that stuff if we’re going to care for patients coming from all over the world."

Because medical education and training in the United States hasn’t keep up with global demographic changes and the speed of travel, health disparities persist and are worsening, she added.

To help reduce such barriers, the University of Minnesota’s Department of Medicine has created a Global Health Pathway program to lead the way in educating the next generation of doctors who will care for the constant flow of refugees and immigrants coming into this country, said Walker, an assistant director of the program. She also is an assistant professor of infectious disease and international medicine.

"We need to teach medical students, nurses, social workers … to ask the question of ‘Who are you?’" Walker added, noting that a patient’s history of origin and travel is as important as race and ethnicity in terms of quality of care.

About 12.5 percent of the U.S. population is foreign born, Dr. Martin Cetron, from the Centers for Disease Control and Prevention, noted during his keynote speech on June 28. The largest group of U.S. immigrants currently comes from Mexico, followed by the Philippines, Puerto Rico and Germany, according to http://migrationsmap.net/#/USA/arrivals, a website that Cetron referenced during his talk.

Refugees mainly come from Burma, Bhutan and Iraq, he said.

Those are the same populations that comprise the majority of refugees cared for by staff from the Harris County Public Health and Environmental Services in Houston, Texas, said Jannell Pesquera, the TB and refugee program manager.

Tamisha Piper, a physician’s assistant with the program, said that the information gathered during the conference would be useful in the screening of refugees.

"The biggest thing for me is the clinical aspect," she added. "We completely screen and then refer out to primary care providers."

Such measures are critical because infectious diseases — including respiratory infections, AIDS, diarrhea, tuberculosis, malaria and measles — are the leading causes of death among refugees, explained Cetron, who is director of the CDC’s division of global migration and quarantine. And the CDC’s new regulations don’t call for active HIV screening as part of the process for entry into the United States, he added.

"That responsibility falls on you (health providers) now," Cetron remarked. "Because the first step in treatment and prevention … is knowing a patient’s HIV status."

Another major challenge for U.S. clinicians is the prevalence of TB — affecting about a third of the world’s population, he added.

"The world’s problems are your problems through local populations," Cetron said. "Dealing with TB needs to be something we all spend time on."

Refugee resettlement programs, such as those run in the Rochester area through Catholic Family Center, play a key role in health intervention through vaccinations and other medications that ultimately save money in treatment costs, he added.

Iris Villegas, who works with Monroe Plan for Medical Care, said that learning about other cultures through the conference’s workshops and speakers also helps improve health-care services.

"There is a lot of stereotyping that goes on, especially in populations of color," she said.

Training in cultural competency, therefore, gives providers insight that leads to better patient care, Villegas added. For example, Hispanics rely on self-treatment through teas and plants so doctors must take extra time to educate these patients on their medicinal options, added Villegas, who is from New York City.

"We have to tell them, ‘That might work but this (treatment) is better,’" she said.

Walker also is working on a global health directory to help current physicians answer questions they might not otherwise have encountered. A connected community of health providers also is a valuable resource, she said.

For example, her clinic encountered a refugee from Bhutan who had been seen for years by other doctors for leg numbness. When her staff spoke with a doctor from Utah who had seen the symptom in other Bhutanese patients, they were able to diagnose the man with a B-12 deficiency, Walker noted.

"That shows the power of the clinicians who have their eyes and ears to the ground really seeing patients," she said.

The conference provided such networking opportunities for health providers from all over the United States and Canada, as well as some from Switzerland, Malaysia and Kenya, said organizer James Sutton, a physician’s assistant with Rochester General Hospital.

This year, RGH partnered with the University of Toronto to create the conference, which was attended by about 450 people. Next year’s conference will be held in Toronto.

"There’s a pent-up demand for this type of education," Sutton said. "We’ve literally become the epicenter of refugee health care."