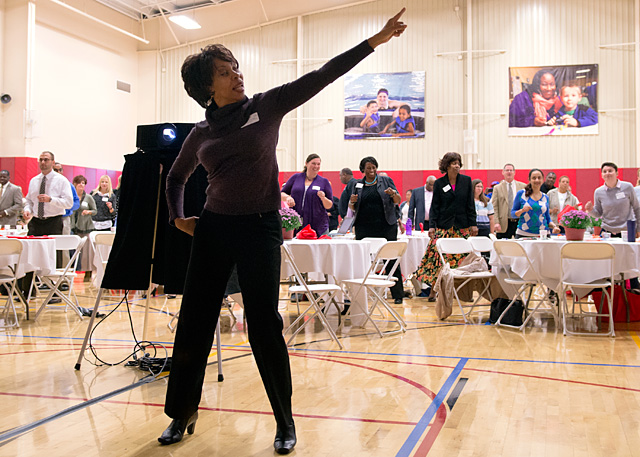 ROCHESTER — Doctors used to worry that their patients’ health might suffer if they couldn’t read.

When it comes to treating patients and providing quality care nowadays, however, doctors also are aware of the importance of the "twins" of health literacy and cultural competency, according to Dr. Sharon Denise Allison-Ottey, a national expert on community health initiatives

Allison-Ottey, who also is executive director of the COSHAR Foundation, which focuses on addressing health disparities in minority communities, noted that health literacy goes beyond the ability to read — it means that patients can read, understand and act on their doctors’ orders. Cultural competency goes beyond ethnicity and includes an awareness of religious and geographic norms of patient populations, she said.

Allison-Ottey spoke about health literacy and cultural competency, as well as running a successful nonprofit organization, during the second-annual Urban Wellness Summit held Sept. 29 at the Maplewood YMCA. The summit was hosted by the High Blood Pressure Collaborative, whose partners include Wegmans, the Finger Lakes Health Systems Agency, Excellus, MVP, University of Rochester Medical Center and Rochester Institute of Technology. Becky Lyons, director of health and wellness for Wegmans, said the group grew out of a Rochester Chamber of Commerce team that had formed in 2006 to address such community health-care issues as access, affordability and disease prevention.

As a medical professional focused on improving health literacy in this country, Allison-Ottey admitted she faced challenges when it came to addressing the "twins" in her own family. Her mother suffers from hypertension and was told to eat a low-salt diet. When she spoke to her mother about it, her mother insisted she wasn’t eating salt, then pulled a ham from the refrigerator, Allison-Ottey added. In North Carolina, where her family is from, meats like ham are cured in salt, she noted.

"My mother can read, she understands she has high blood pressure," she added. "But she can’t act. My mother has issues about health literacy."

Other patients she treats who suffer from diabetes will tell her that they have stopped adding sugar to their drinks, but they forget to mention the honey buns they eat, she said. With other patients, she faces the challenge of telling them how to cut out butter, a main ingredient for making biscuits in the South, she added.

So, whether in one-on-one appointments or in community workshops, doctors must give their patients the tools to gradually change their habits, noted Allison-Ottey. For example, she suggested asking patients who refuse to completely remove fried chicken from their diets to instead take a 20-minute walk after dinner.

And, if a doctor is dealing with members of a faith-based group, she suggested reminding them that God wants them to be healthy, Allison-Ottey said.

She explained that lack of health literacy does not have anything to do with one’s level of education. She recalled giving a patient — a woman who had a doctoral degree in mathematics — specific instructions on how to take a prescribed osteoporosis medicine. For a couple of months, the patient kept returning to her office complaining of indigestion until Allison-Ottey thought to ask how the patient was taking the medicine. She discovered that this "brilliant" woman was not following her instructions at all, she said.

"Health is foreign to most people," Allison-Ottey said. "We have to look at that and break it down so the average person can understand it. I tell medical students that all the time. … We have to make sure we bring culture and health literacy together to navigate (potential misunderstandings)."

For these future doctors to be successful, their patients must understand what their health problems are, what they need to do and why it is important for them to follow those instructions, she added.

Soumya Sridhar and Katie Lynch, pediatric residents at the University of Rochester Medical Center’s Family Medicine program, said Allison-Ottey’s presentation offered them a lot of useful information as doctors and also for collaborating with nonprofit organizations in the community. The two also are enrolled in a program to help them learn about community resources.

"It’s a great program that exposes us to links in the community, social links, that we can connect to our patients," Sridhar said.

"We can’t fix every problem for our patients at one visit," noted Lynch. "We have to keep working with the patients."