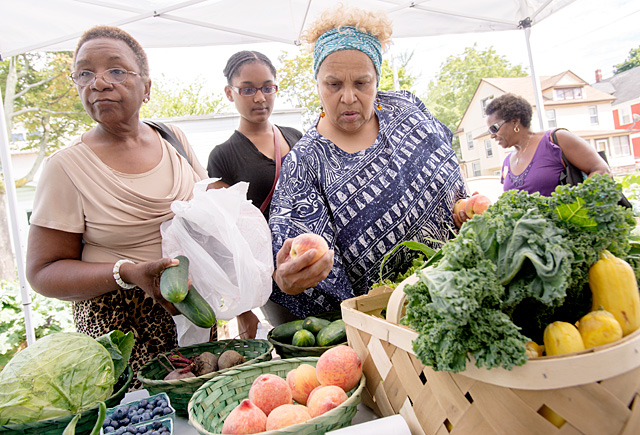 EDITOR’S NOTE: This is the sixth article in a series on poverty.

The Maryland native recently moved in next door to the T&K Fresh Corner store, which is at the corner of Carter and Manchester streets in the city’s northeast. He said he was thrilled when Foodlink decided to help the owners convert the mini-mart into a store with a whole section dedicated to the sale of fresh produce.

"To have food high in fiber, it’s a great idea," Harris said, who added that the store’s conversion saves him a trip to the Rochester Public Market to buy produce. "It’s really good for the community. … It’s very convenient and the price is affordable."

Improving access to produce is especially important to many residents in lower-income neighborhoods who don’t own cars, noted Cassandra Harrell of Rochester, who also lives next door to the store. Many African-Americans and other ethnic communities suffer from high levels of diabetes because of poor diet choices, Harris added.

"They need more fruits and vegetables," he said.

To offer the community more fresh produce was one of the reasons T&K decided to join Foodlink’s Community Store initiative, said Kiflu Embaye, who owns the store with Takele Delnesa. The two men are from Ethiopia.

"We are helping the community and they are helping us," Embaye said. "In a corner store, there’s not much fresh fruit and vegetable."

He also has heard comments from neighbors that they are grateful for the new produce selection.

Access to affordable and healthy foods is out of reach for many American living in low-income urban areas where supermarkets have closed or rural areas where larger stores are far away, according to healthycornerstores.org. Conversely, urban areas may be home to many fast-food restaurants and convenience stores, the site stated. In Rochester, there are 10 corner stores for every square mile, according to information from the Greater Rochester Health Foundation.

A study in the medical journal Pediatrics (pediatrics.aappublications.org) found that more than 40 percent of elementary-age students shopped in a corner store twice daily, often purchasing chips, candy and soda.

"I can’t make produce cheaper than chips and candy bars," said Mitch Gruber, Foodlink’s community food access coordinator. "But we can make it appealing, make it affordable and try to see if it works."

The agency began the process with requests for proposals from stores on the west and east sides of the city, Gruber said. Of the 20 stores that applied, two stores were selected — T&K and OneStop Meat Market on Jay Street. Each store underwent exterior and interior renovations, added new equipment, and were able to increase the availability of fresh fruits and vegetables at affordable prices with Foodlink as a clearinghouse, Gruber said. Foodlink also helped with designing promotional ads and new signs at the two stores, he added.

OneStop Meat Market reopened in January and has sold more than 2,000 pounds of produce. Foodlink also has provided 20 workshops, including tours of the store to discuss buying healthy options on a budget, to 250 participants. At T&K, Foodlink offers an outdoor fresh food stall in front of the store on Saturday afternoons and soon will begin cooking demonstrations, Gruber said.

Providing demonstrations and education about using fruits and vegetables is an important part of this work to get lower-income residents to eat healthier and avoid food waste that such families can’t afford, noted Heidi Burke, a senior program officer with the health foundation. Promoting healthier eating also helps the community as a whole, she added.

"Access to healthy food … decreases the risk of obesity and other chronic conditions," she said. "When you go through that continuum, (that access) plays a role in health and plays a role in decreasing health-care costs."

The health foundation provided the North East Area Development group with a grant to renovate a store on Webster Avenue, which reopened in 2013, she added. Since that time, the store, called the Freedom Market, has seen not only an increase in the sale of produce but also in the sale of water among Beechwood area residents, Burke noted.

"Families weren’t quite interested in saying I’ll pick water over soda but I’ll take water with soda," she said of data collected by the Freedom Market. "That is still moving us in the right direction.

In creating its initiative, Foodlink studied other models in cities across the country from Philadelphia to Los Angeles, Gruber said. Many of those cities have partnered with local organizations and store owners to improve corner stores, as Foodlink and the health foundation have done, according to http://www.healthyfoodaccess.org.

Foodlink will collect data at the T&K and OneStop Meat Market to measure the impact of the changes and see if the initiative should be expanded, Gruber said. Much of the information that has been collected thus far has been anecdotal, he added.

"A lot of people in the neighborhoods really like the way the store looks," Gruber said. "For those who previously have not gone in the stores, they feel safe in there."

The health foundation hopes Foodlink will continue down this path, Burke added.