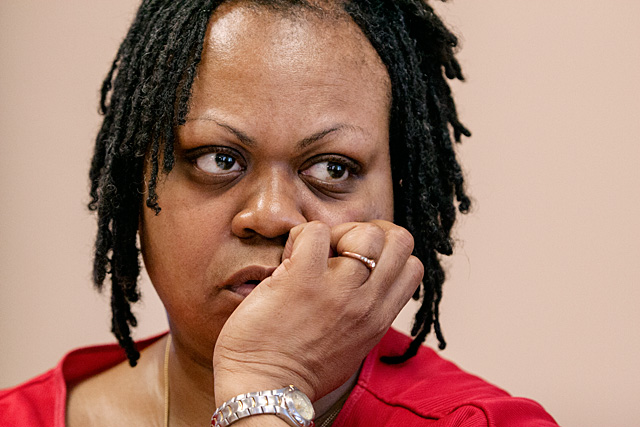 ROCHESTER — Franklyn Carter was self-medicating his depression with drugs and alcohol before he connected with a new treatment program at Brown’s Square Health Center.

And it was a godsend compared to another local substance-abuse program that had put him on medications that made him feel like "a zombie," he said during a Jan. 23 interview at the center.

"The medicine I had prescribed myself was bad but that (prescription) was even worse," Carter remarked.

The individual and group counseling sessions offered through the program at Brown’s Square, which is affiliated with Anthony Jordan Health Center, finally offered Carter exactly what he had been searching for, he said.

"This program, this therapy of sitting around people experiencing the same thing I was experiencing, with no pressure, they allowed me to come out instead of me trying to come in," he said.

His depression had stemmed from his need to try and fit others’ ideas of what he should be like, Carter explained.

"I just wanted to be accepted," he said. "I didn’t want to kill myself, but thought I’d be better off dead. … But something told me, I can get better. Something has to give."

Three years later, he is about to "graduate" from the program, which means he has gone into remission, explained Yathona Kennedy, the depression-care manager who worked with Carter.

Kennedy is employed by Highland Family Medicine and took on the newly created role of depression-care manager for the treatment model that was recently recognized by the Greater Rochester Health Foundation.

With funding from the foundation, the Highland and Jordan’s Brown Square centers created a three-year program to treat depression in low-income and minority patients. For their success in reducing depression for enrolled patients by more than 50 percent, Dr. Thomas L. Campbell of Highland and the Jordan center received the Robert Oppenheimer Impact Award.

The award recognizes individuals and teams who improve the health statuses of Rochester residents, including the care of patients whose health needs have not been met because of race, ethnicity or income, according to the foundation.

"Depression is a major health issue that is often under-diagnosed or untreated," John Urban, president and CEO of Greater Rochester Health Foundation, stated in an e-mail. "Failure to treat depression negatively impacts health outcomes of other chronic conditions. Dr. Campbell proposed an intervention that addressed a high need in the community, linked primary care with mental health care using an evidence-based model, and increased access to mental health services for a patient population at risk for depression."

Campbell, chairman of the Department of Family Medicine at the University of Rochester, led the program at the two sites and focused on mothers of newborns and patients with diabetes, chronic pain or a history of depression. About 9,000 patients were screened through a questionnaire administered by primary care doctors, he said, and 1,265 patients were treated with medication, were referred to counseling or received both, Campbell said.

"They were followed closely," he noted. "The depression care manager helped them get into counseling if they were not seen there (at the center), or they were referred to other agencies. We made sure they were seen. If they were on medication, we’d make sure they took medication and followed protocol. … Most importantly, we scheduled their follow up so they would come back in two to four weeks."

Whatever didn’t work was modified to help the patient go into remission, Campbell said.

The great number of patients who utilized these services is a great testament to the model’s success, since everything was voluntary, including the initial screening, Kennedy said.

"When things are voluntary, you usually don’t get any participation, especially with this population," she said. "But I would call them and they liked that — having somebody behind the scenes working with their doctor. We’re all working together."

Having access to this program has been greatly beneficial and is something that was greatly needed for city residents, added Arthenia Jones, who began receiving treatment last fall after being referred to the program by her primary care doctor.

"I think a lot of people suffer from it (depression)," she said. "But they don’t have the resources and are not able to get the help they need."

To improve access to such treatment is one of the main reasons Campbell applied for a grant to offer this well-proven model, he said.

Depression strikes about 10 percent of the general population, Campbell said, with feelings of sadness, hopelessness or general disinterest in life. When these feelings last for more than two weeks and interfere with such daily activities as taking care of family, spending time with friends, or going to work or school, it’s likely a major depressive episode, according to the Anxiety and Depression Association of America. The treatable illness affects the way a person thinks, feels, behaves, and functions with 3 percent to 5 percent of people suffering from major depression at any given time, states www.adaa.org/understanding-anxiety/depression.

But in addition to trying to cope with the emotional struggles that stem from the prevalence of poverty, urban populations also suffer from higher rates of chronic health conditions that lead to depression, Campbell explained.

The prevalence of violence is another unique depression, especially when it strikes personally, Kennedy said.

"They don’t know how to handle it," she said. "People stay stuck for a while."

"Depression is a huge burden," Campbell concurred. "Worldwide, it is the biggest medical condition that has biggest impact on overall quality of life and mortality."

And unfortunately, depression still has a stigma attached to it, Campbell and Kennedy agreed.

"We have a long way to go in addressing the stigma associated with mental illness," he said. "That’s a societal issue."

The foundation’s initial funding led Campbell’s team to obtain a Hospital-Medical Home grant supported by the Centers for Medicare and Medicaid Services, added Urban. That grant also allows the local staff to receive technical assistance from the Institute of Family Health, he said.

"The new funding helps sustain a solid program, which is always gratifying to see," Urban noted.

The program’s success also is largely due to the work of Kennedy, said Jones. Kennedy has gone above and beyond to help her regain her life back after she fell into depression upon her mother’s death last May, she said.

So after filling out a questionnaire from her primary care doctor, which is part of the model, she was not surprised by the diagnosis since she had suffered depression in the past, Jones added.

"I was feeling down all the time," she said. "I was not really wanting to do anything I enjoyed doing."

So, she began meeting with Kennedy, who recommended she also join a group session.

"I have had a hard time with death," having also suffered the loss of her father and grandparents in recent years, she said. "So, when my mom passed away, it was really tough for me. I was her primary caregiver. … Sometimes, it was tough to just get up and get going."

Through the counseling, she is now starting to retry the things she used to enjoy, such as singing at church.

The counseling not only helps patients by allowing them to talk through their issues, but offers coping strategies on stressors they have identified as well, Campbell explained.

Carter and Jones agreed that just listening to what others are going through truly helps, she said.

"It’s giving me a different perspective on situations," Jones said. "I know I’m not all alone."