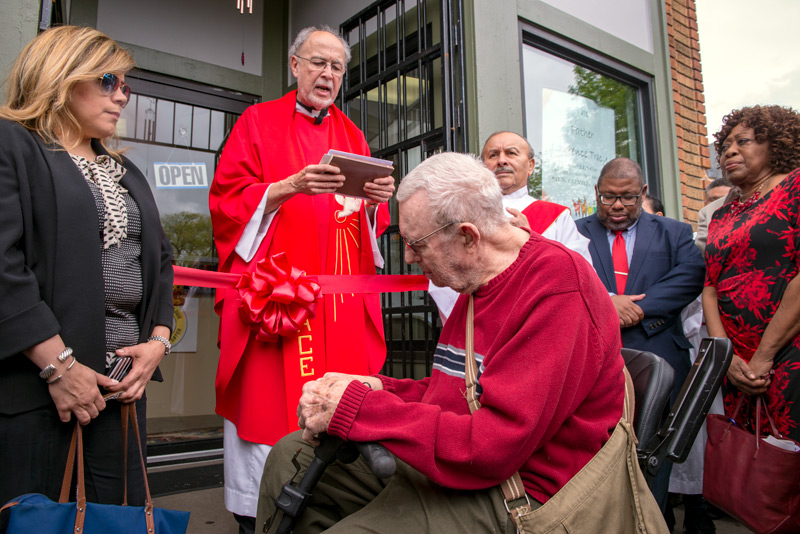 Father Bob Werth gives a prayer during the ribbon-cutting ceremony.

ROCHESTER — The creators of the Father Tracy Health & Wellness Center say “no más” (“no more”) to the heroin epidemic plaguing North Clinton Avenue.

“We are tired of the devolution of our neighborhood and our community,” said Rudy Rivera, the center’s volunteer director who also is one of the founders. “This (center) is a labor of love, passion and commitment to make sure all the efforts that Father (Laurence) Tracy put into the avenue continue. So nobody forgets what he did and how he did it — with the people, by the people.”

A dedication ceremony for the center took place May 20 after a Mass at St. Michael Church and a procession to the facility’s 821 N. Clinton Ave. location. Father Tracy cut the ribbon at the center’s doors, and Father Robert Werth blessed the building.

“You could see a radiance of joy,” Rivera said of Father Tracy. “This center defines … who he’s always been.”

During the dedication, Mercedes Vázquez Simmons read remarks written by Father Tracy, who has amyotrophic lateral sclerosis (ALS) and is unable to speak.

“Even though I’m Latino at heart, I’m pleased to lend my name and reputation to this effort until God calls me,” he wrote.

Father Tracy also recognized Rivera’s efforts in helping to create the center on his own time and doing outreach work to talk to individuals suffering from addiction.

“These men and women might not be alive today if not for Rudy’s work,” stated Father Tracy. “This center will support the work Rudy has begun.”

The center’s grassroots mission will focus on connecting anyone who walks through its doors with community resources, Rivera said during a May 23 interview with El Mensajero Católico. Referrals will include access to treatment providers, medical screening or care, employment, housing, translation and food, he explained. The center also has a clothing closet in its basement.

“We do not want to reinvent the wheel,” noted Miguel Meléndez, Project HOPE coordinator for Ibero-American Development Corp. (IADC) who is lending staff to the center. Project HOPE is a collaboration between the IADC and the Greater Rochester Health Foundation to improve the overall wellness of northeast Rochester.

Meléndez first met Rivera in January 2017 at a meeting of the Latino Health Coalition, a group of Latino health and community leaders. Since both men were working to address the heroin epidemic in the North Clinton Avenue area, they decided to join their efforts. They began meeting weekly at St. Michael Church and started a “No Más” committee comprising residents, community activists and neighborhood groups to work on eradicating the epidemic, Meléndez explained. As the committee grew, its members began taking part in walks around the community and focused on talking to heroin users, dealers and anyone else affected by the issue, he said.

Then, two events last summer prompted the committee to kick into high gear to open the center, Rivera said: a picture posted on social media of a dead cat surrounded by needles and the desecration of a statue of the Virgin Mary on St. Michael’s campus.

“I snapped … and said this is where it ends,” he said of the heroin abuse along North Clinton Avenue.

At the same time, staff from Action for a Better Community, a community service agency for which Rivera has been a longtime program director, found the vacant 821 N. Clinton Ave. building owned by Roberto Burgos. Rivera met with Burgos and a lease agreement was signed, and Project HOPE and St. Michael each donated $3,000 to begin operating the center.

One of the center’s goals is to integrate St. Michael’s community into the work its volunteers will be doing, Meléndez said. To fully address the heroin epidemic, to which he said too many neighbors turned a blind eye for too long, will require a holistic approach.

“It’s important for the community, for the church to maintain an active presence,” he said. “Everyone has to buy in.”

Father Tracy noted that the church must be like the Good Samaritan in bringing healing to the streets and be a partner to supporting the center’s work.

Project CLEAN (Community Law Enforcement and Assistance Network) is a partnership with the Rochester Police Department and Rochester Institute of Technology’s Center for Public Safety Initiatives.

“We are facing a well-organized, long-existing drug market that has been allowed to flourish,” Cushman-Smith said. “It’s not just about solutions but finding out what’s causing the problem.”

The center hopes to serve as part of the solution, Rivera and Meléndez said. But they will need the support of the entire community, Rivera said.

As of May 23, the center’s founders only had enough funding for another month’s lease payment as they apply for nonprofit status, Rivera said. Ibero-American Action League and St. Michael are serving as fiduciary agents for any donations until the center become incorporated, Meléndez said.

“We want to change the neighborhood” for the better, Rivera said. “Folks on the street need some physical semblance of hope.”