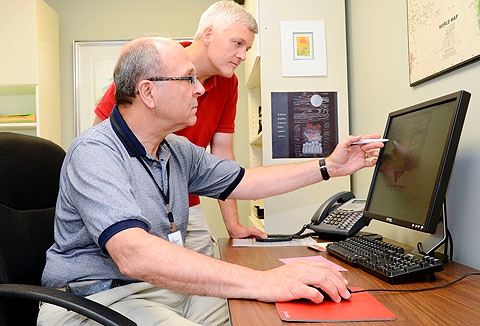 David Kyle (top) meets with Bob Wolf, an access team volunteer, who researches a web site with him at St Joseph's Neighborhood Center in July.

"We were ready to implode," Sister of St. Joseph Christine Wagner noted about the center’s situation at that time. "We were in meltdown mode."

To deal with the crisis, the center took "a drastic step" and did not accept any new patients for about 12 weeks beginning in December 2010, something that had never been done in St. Joseph’s 19-year history, Sister Wagner acknowledged.

But the center’s staff needed a triage of sorts to determine how they were going to continue offering care to people with no health insurance or those who are underinsured, noted Sister Wagner. The center provides care to about 2,300 patients, she added, with a volunteer corps of health professionals offering primary care, pediatrics, chiropractic and physical therapy, and dental and mental-health services.

During the period that the center didn’t take new patients, it focused on finding out why people were calling and what situations they were facing and how to better address those needs, she added.

"We were able to help them," she remarked.

As a result, the Health Access and Navigation System was born with a six-month pilot program that began in the spring of 2011, Sister Wagner said. A group of volunteers had collected data during the period that the center didn’t take new patients to create a grant proposal that was submitted to the Greater Rochester Health Foundation last fall, she added. The foundation awarded the center a three-year $487,033 grant at the beginning of this year, according to GRHF officials.

The grant allowed the center to hire the volunteers that had collected that data and created a clearinghouse of information on where clients can go if they do or do not have insurance, Sister Wagner added.

And all those clients can get information on where to apply or how to get an appointment for care at the center, she said.

"They are ever so grateful that they can do everything right here," said Sister Wagner. "There’s no wrong-door sign. You make the phone call and you’ll get placed with health care someplace. We think that’s the way it’s supposed to be."

David Kyle said that he still cannot believe all the assistance he received at the center to help him obtain health insurance after living without it for more than a decade.

Kyle is an actor and turned to St. Joseph’s earlier this summer at the behest of a friend in the local arts community. When he called and set up an appointment, Kyle said that he wasn’t sure what to expect.

But a staff member walked him through all the insurance options for his income level and found a grant through Unity Health that offered him coverage for at least a year, Kyle explained. He has already recommended the HANS program to other friends in the arts, many of who find themselves without insurance because they don’t have full-time jobs, Kyle added.

"They made it (the process) 100-percent embarrassingly easy," he remarked. "They sit down and talk about what your needs are. It was fantastic."

Sister Wagner hopes state officials will look at the HANS model as they create the health-care exchanges that are part of the federal Affordable Care Act. She also hopes to enlighten others about HANS through her participation in a regional advisory committee.

The Affordable Insurance Exchanges will allow individuals and small businesses to compare health plans, get answers to such questions as whether they are eligible for tax credits for private programs, and enroll in an appropriate health plan, according to www.healthcare.gov/law/features/choices/exchanges/index.html.

HANS is an "on the ground" forerunner of the insurance exchanges, which are to be certified and operational by Jan. 1, 2014, John Urban, GRHF’s president and chief executive officer, stated in an e-mail.

"Access to health care is an important determinant of health," he added. "HANS performs a vital function by helping people find the right health plan for their specific health conditions, their geographic preference for health-care providers and their budget. St. Joseph’s piloted the program for six months before applying for funding to assure that it was easy for people to go through the process."

Health officials will face the challenge of convincing people that the health exchanges are trustworthy, especially those who have not previously qualified for insurance and have been receiving treatment at the center, noted Sister Wagner.

The HANS staff also will face the task of figuring out who is still left out of the new health-care law, she noted. HANS staff members include a program director and an assistant, and the center is working on hiring a nurse to help with discharge planning for clients seen by the center who do go on to insurance plans.

"We’ll have to retool to best serve the needs of the people," she remarked.