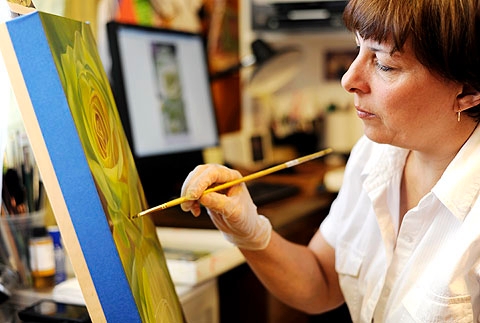 When Peggy Martínez was a young girl, she noted how her sister was allergic to everything.

Doctors here diagnosed her sister, Margarita Martínez, with asthma and recommended that her parents move the family back to their native Puerto Rico to help her breathe better. Asthma is a narrowing of the airways in the lungs, and allergies can exacerbate the condition, Martínez explained.

They lived on the island for 10 years and then returned to live in Rochester, she said.

"The heat (of Puerto Rico) made it worse. She never outgrew it," Martínez said of her sister’s asthma.

In fact, Margarita Martínez lost her battle with asthma in 1999 at age 33, leaving behind two young children.

To honor her sister and raise awareness of the prevalence of asthma in the Latino community, Martínez has created an art exhibit and blog, both titled "The Gift of the Rose." Her sister loved roses, she noted.

Martínez, who previously had worked nearly three decades in banking, took time off about a year ago to pursue her art, which has been her passion since she was young. The life change also gave her the chance to do something meaningful with her art, she added.

"I always wanted to do something in her memory," Martínez said of her sister. "This was the perfect opportunity."

As part of the project, Martínez also held two painting demonstrations prior to an opening reception on July 13. All proceeds from the sale of the paintings — which feature roses in red, yellow, pink and green hues — will benefit the Golisano Children’s Hospital at the University of Rochester Medical Center. If the blog produces enough stories and photos for a book, Martínez said that she will donate those proceeds to benefit Golisano’s pediatric asthma unit.

Martínez worked on three paintings at a time in her home studio in Chili during most of June to prepare for the exhibit, which will be held at the art gallery at the 1570 Art Gallery on East Avenue in Rochester.

"I’m just so happy … being able to paint without distractions," she said. "This has stretched my skills to boundaries I never thought possible. … That is one message I would send out: Follow your passion."

Martínez’s project shows her commitment to improving the community, said Daisy Rivera-Algarin, president of Latinas Unidas. Martínez is a longtime member of the organization.

"Whenever I see one of our members, especially a former board member, branch out and pursue her dreams, I immediately think of our mission: Latinas Unidas fosters opportunities that will promote unity, cultural identity and the presence of the Latina woman in the community," Rivera-Algarin wrote in an e-mail. "Peggy embodies our mission to the fullest."

Any kind of increased awareness of asthma triggers and the tools available to manage the condition are beneficial to the entire community, but especially ethnic populations living in urban environments who are exposed to many environmental asthma triggers, noted Jan Schriefer, as assistant professor of pediatrics at URMC.

"They have the disadvantage of being in a lower socioeconomic situation," she said. "It hits (these families) much harder."

Hispanic children with asthma are hospitalized twice as often as white, non-Latino children, according to an Environmental Protection Agency study at www.epa.gov/epahome/sciencenb/asthma/HD_Hispanic_Asthma.pdf. Asthma rates in general have increased worldwide and skyrocketed 75 percent in the United States from 1985 to 1994, affecting more than 6.5 million children, the report states.

And Puerto Ricans disproportionately suffer from higher rates of asthma than any other ethnic group, with 12.8 percent of adults and 18.4 percent of children diagnosed as compared to 8.2 percent of white children and 14.6 of African-American children, according to a report at www.cdc.gov/mmwr/pdf/other/su6001.pdf.

"Some children may inherit a tendency to develop asthma," states the Environmental Protection Agency’s report. "Racial and ethnic differences in the burden of asthma may be related to social and economic status, access to health care, and exposure to environmental triggers."

Exposure to secondhand smoke in a household is one of the biggest triggers for children or adults with asthma, Schriefer said. Other environmental triggers include dust mites, mold and cockroaches, she added.

Through a program called "Breath of Hope," URMC partners with such community agencies as the American Lung Association, the Jordan Health Center and the Rochester Community Asthma Network of the Finger Lakes to educate families and help them reduce those triggers, explained Cynthia Ellsmore, project coordinator. The program also works with schools to disseminate information about how to manage asthma and resources families can turn to for help, Schriefer said.

Reducing secondhand smoke in a home is one of the program’s primary goals, she said. Many pediatricians who participate in the Breath of Hope program have referred parents and grandparents to a quit smoking hotline run in conjunction with the state, Schriefer said.

"It’s been really rewarding," she remarked. "I’ve had a lot of pediatricians say that the parents or guardians have been able to stop smoking, and it has really improved the children’s asthma. Of course, it improves the caregiver’s health as well."

Martínez said that she has dealt with the challenges of addressing asthma triggers when her now 9-year-old daughter was diagnosed about a year ago. She had just carpeted her entire house and had to rip it all out as well as get rid of stuffed animals, which collect dust, Martínez said.

"She’s getting a lot better," she said of her youngest child. "These are the little things you can do to make them breathe better."

Other family members including her mom and another sister also suffer from various types of asthma, which can vary from mild to severe, Martínez said. They also were another catalyst for creating the "Gift of the Rose" project, she added.

She hopes more Latinos learn about the many asthma resources available to them, which in addition to Golisano’s programs include the Mary Parkes Asthma Center in Henrietta, Martínez said. The center has been a great help to her older sister, Linda Santana, in managing her asthma medications, Martínez added.