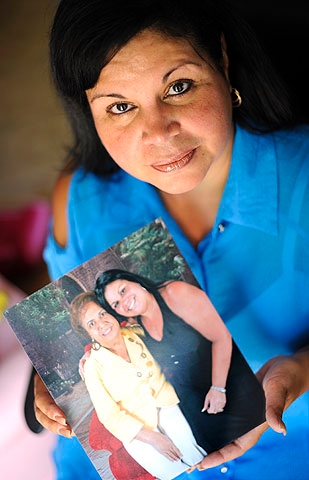 When Eleuteria "Doña Mari" Rivera knew she was entering the final days of her life, she informed her doctor and her family that she wanted to be at home.

And that’s how her family learned of hospice care, explained her daughter, Gloria Martínez. Rivera died in May 2011 at the age of 72 after suffering for more than a year from liver cancer.

"She was adamant about not going back to the hospital," Martínez said. "She said, ‘I want to be home and be comfortable.’ "

Martínez said that the family was wary of how to handle her request and knew the services of a Spanish-speaker would be vital, as the family is originally from Puerto Rico. So they were relieved to have been referred to Lifetime Care, she noted.

The agency provided a hospice team to guide the family on the comfort model it had chosen for Rivera’s care, Martínez added. A bilingual home health aide came to the house daily to help feed, bathe and talk with Rivera and proved to be a huge help for Martínez, she said.

The aide "made us feel comfortable if I had to leave for an hour or two," Martínez remarked. "It’s hard. You can’t be there 24/7. You need that little space to get out and do what you need to do."

A nurse also was on hand every day to answer any question she, her brother or father had or call the doctor when needed, Martínez remarked. And a counselor spoke with her father, Luis Rivera, before and after Rivera’s death.

"They took us through the (hospice) process step by step," Martínez said of Lifetime’s staff. "They just opened up our eyes and we knew what to expect. It was hard on all of us because it’s your mom. But I can’t thank them enough. They were always there no matter what. We could call at any hour, and someone would call us back. It was really good for us."

Many in the Hispanic community relate to the hospice concept from their native countries once he explains it to them, González said. But misconceptions arise from those in the community who tie hospice care to nursing homes, González remarked.

"And in the Latino culture, nursing homes are taboo," he noted. "So that misperception exists."

Once patients and families in general understand that hospice is not a place but a philosophy of care, they are more willing to accept such care, added Helen McDermott, Lifetime’s vice president of communications and development.

The concept of hospice to care for terminally ill patients originated in London during the 1960s , according to www.hospicefoundation.org. New Haven, Conn., was home to the first hospice in the United States.

Lifetime Care was in the forefront of this movement and established a pilot hospice care program in the 1970s, explained Rose Fletcher, manager of the agency’s volunteer services. Once Medicare approved coverage for hospice services in 1983, the agency expanded the program, she added.

There are now more than 4,700 hospice programs caring for about 1 million people annually throughout the United States, according to www.hospicefoundation.org,and those programs are provided in patients’ homes or the homes of family members as well as in nursing homes. Locally, St. John’s Home and St. Ann’s Community offer hospice options to their residents.

Rochester and several adjacent counties also are home to 12 comfort care homes that provide hospice care to dying patients, according to www.compassionandsupport.org. Although each home operates independently, they all provide the same model of care: assisting two people at a time with the help of volunteers and nurses without any cost to the patient or the family, according to information on the website.

The idea of hospice, however, continues to pose difficulties for some families because it does mean a patient has decided to forego additional "curative treatments," she said. But McDermott stressed that treatments for any pain or infections that may occur are provided as part of hospice.

"It’s a recognition of the fact that it’s the final journey," she said. "It’s hard to say out loud."

Once families reach the stage of acceptance, volunteers play an important role because they act as neutral companions to talk with the patient and keep the person comfortable, Fletcher said. And they help the families by providing respite for the caregiver or family members, she added.

To have volunteers, as well as staff, who can provide this care in the native language of the patients is imperative, González remarked.

Jeanette Santiago can attest to that in her work as a home health aide with Lifetime Care. The aides are part of the hospice team, which also includes physicians, nurses, social workers and volunteers as well as the patient and his or her family, she said.

Many times, just sitting with patients and talking to them helps tremendously, as they love sharing stories from the past or about their children, Santiago added.

"Yes, there are difficult moments and they (patients) themselves acknowledge that," she said. "But we have fun talking so they feel happy and content."