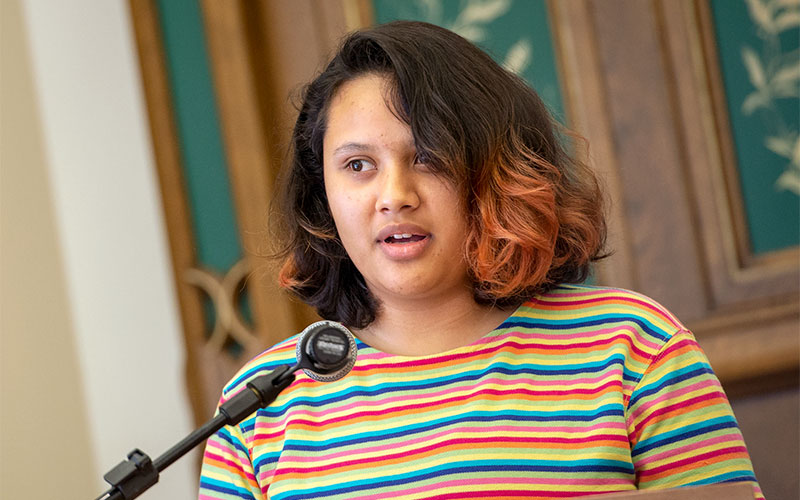 Teen Nancy Aguilera shares her story of her family's struggles following her father’s deportation during an Aug. 9 “Sharing the Journey: Responding to Immigrants with Knowledge and Compassion” workshop at St. Bernard’s School of Theology and Ministry.

PITTSFORD — Mary Skvorak was so moved by the story of a young immigrant last month that she planned to help the family right away.

During the Aug. 9 workshop “Sharing the Journey: Responding to Immigrants with Knowledge and Compassion” at St. Bernard’s School of Theology and Ministry, Skvorak heard the story of Sodus High School senior Nancy Aguilera, who was one of the speakers providing testimony and information about immigrant and refugee experiences.

Nancy arrived in the United States illegally at the age of 12 with her mother, who has since gone on to become a citizen, she said. Now, she and her three siblings — one of whom was born here — are citizens, she added. Her father, who is not a citizen, was deported to Michoacan, Mexico, two years ago and lives in a small town where he and his relatives subsist on crops they grow for themselves, she said.

Nancy tearfully detailed her struggles with depression and her family’s financial challenges since her father’s deportation. She also shared her concern not only for families like hers but for children who were separated from parents at the border due to the federal government’s zero-tolerance policy toward illegal immigrants.

“I try to look forward because life keeps on going,” Nancy said. “In reality, I know I’m one of the lucky ones whose dad is OK. The other children who are separated … and don’t have anybody are really alone. We really need to help them.”

After listening to the speakers, the 100 workshop participants broke up into groups to learn about ways to connect with local organizations to advocate on behalf of or directly help families like Nancy’s.

Skvorak said that her longtime interest in social-justice causes brought her to the workshop. After Nancy spoke, Skvorak exchanged contact information with her to create an informal exchange where Skvorak will invite Nancy’s family to her home, and she and her husband will visit Nancy’s home to provide tutoring, meals or anything else the family may need.

That kind of personal interaction may seem small but can change hearts and minds, Jim Morris, vice president for family services at Rochester’s Catholic Family Center, noted during the Aug. 9 workshop.

“The more people in our community who interact and (understand) who immigrants are, the less hate there will be and the more tolerance there will be,” said Morris.

Demonizing immigrants ignores the history lessons that should have been learned when boatloads of Jewish children and adults fleeing Nazi Germany were turned away from U.S. ports during World War II, explained Ruth Putnam Marchetti, social-ministry coordinator for CFC.

That historical connection is what drew Ayala Emmett, professor emeritus of anthropology at the University of Rochester, to the workshop. Jews know the suffering of the refugee and is why Temple B’rth Kodesh in Brighton is committed to working with other faith communities in raising their voices for those who cannot at the border and in Rochester, she added. Emmett, a native of Israel, is the temple’s social-advocacy chair.

“As people saved us, now we are going to do it for (others),” she added

And though many people in the U.S. were shocked by the separation of families crossing the border from Mexico and other Central American countries, such a policy was an outgrowth of the move toward militarization and criminalization that began three decades ago, noted Marchetti. President Ronald Reagan’s Immigration Reform and Control Act made hiring undocumented workers illegal for the first time and strengthened border enforcement. Under President Bill Clinton, the North American Free Trade Agreement flooded Mexican corn markets, which forced many farmers in Mexico to cross the border to find work, said Marchetti. The Sept. 11 attacks in 2001 led to increased immigration restrictions and the militarization of the southern border. Because of the increased risks in crossing the border, many undocumented workers stayed in the U.S., she said.

“Immigration offenses that were once civil crimes are now misdemeanors and felonies,” Marchetti said. “Half of all federally prosecuted crimes are immigration related as more people are prosecuted and jailed. Every president from Reagan to the present has supported this trend. The difference with the current administration is the lack of discrimination and compassion in who is being deported, with no allowances made for family and community ties or length of residency.”

Additionally, immigration officials in previous administrations had prosecutorial discretionary power and granted conditional freedom to undocumented immigrants on a case-by-case basis, explained Father Jesús Flores, coordinator of migrant ministry for the Diocese of Rochester. Through this discretion, many workers were able to obtain work permits and avoid or delay deportation proceedings. Without those options, an increasing number of such workers are being deported and leaving behind wives and children who depend on them financially, he said.

Knowing that the world must work together to solve desperate migrations, Pope Francis calls on all nations to welcome, promote, protect and integrate families through his “Sharing the Journey” campaign, noted Marchetti.

After the Aug. 9 workshop, Nancy said she felt a little bit of hope due to the positive feedback from participants. The oldest of her four siblings, the 17-year-old had hoped to go to college but now is unsure.

“I have to get a job to pay the bills and help my mom,” she said.