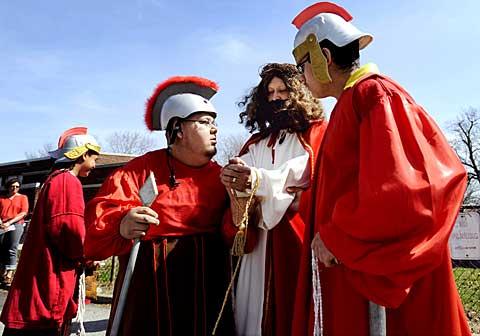 ROCHESTER — The Way of the Cross took a personal turn for Our Lady of the Americas parishioners when it reached the corner of Central Park and Third Avenue during the solemn procession on Good Friday.

Cesar Ostolaza, a 28-year-old parishioner, was killed on Central Park near the intersection only months earlier. The group prayed for Ostolaza and other young men who have suffered at the hands of violence on city streets.

"Jesus carries on his shoulders the cross of his murder and (for) all the families that have to bear (these tragedies)," said Father Vincent Panepinto, pastor of Our Lady of the Americas.

The group walked through neighborhoods in the Marketview Heights area from the parish ministry center at 316 Bay St. to 80 Prince St. Luis Montes portrayed Jesus and several youth-group members served as Roman guards. The group also prayed for mothers who have lost their children to addiction and violence and for those who are addicted as well as those who choose a life of crime.

Traffic stopped along the way for the procession as parishioners walked in the middle of city streets and were escorted by two Rochester police cars. One woman shouted "Gloria" and raised her hands as the procession walked by her car on Woodward Street. The truck that carried speakers for those who acted out the procession’s stations broke down a few blocks before reaching the church, and several men pushed it to the church parking lot. The final stations were said inside the church.

Angel Alicea, formerly a parishioner of Holy Redeemer/St. Francis Xavier Church that became part of the Our Lady of the Americas, said it was only his second time walking in the procession. At Holy Redeemer/St. Francis Xavier, parishioners would perform a Passion play on Good Friday. Alicea said that it’s important to pass on these traditions, so he was happy to see so many families participate.

"This is a good opportunity to teach our younger generation," he said.