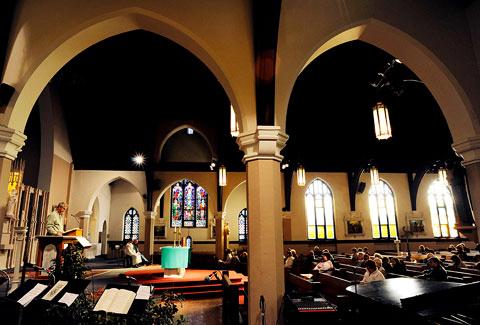 Urban ministry in the City of Rochester must be a priority for the entire diocese, according to diocesan officials and a study group appointed by Bishop Matthew H. Clark. To that end, action has been taken on the study group’s recommendations to improve the vibrancy of Rochester’s churches with support from parishes in the suburbs and outlying areas.

Last month Bernard Grizard, diocesan director of Parish Support Ministries, presented diocesan officials with the Urban Ministry Development Study group’s findings and recommendations. Last spring the group — headed by Daniel Meyers, president of Al Sigl Center — began its work to determine how best to use the diocese’s limited resources to meet the needs of Rochester’s parishes and neighborhoods. The group also presented its recommendations to the diocesan Presbyteral Council earlier this fall.

"All of the members of the group felt privileged to be asked by the Bishop to study both the issues facing our Catholic presence in the city of Rochester and the opportunities to continue that strong presence into the future," Meyers, who also is a member of the bishop’s stewardship council, stated in an e-mail.

Grizard said the bishop asked the 20-member group to look at three areas of concern: ministry, parish configurations and funding. The statistics the group faced were grim, Grizard noted; for example, the city has over the past decade lost a third of its parishes and therefore a third of parishioners. Even attendance at Spanish Masses has decreased 18 percent during that time, Grizard remarked.

The decrease in Mass attendance and loss of parishioners in Rochester is no surprise, Grizard said, noting that the city’s Asian-Pacific population is growing. "It’s part of the trend," he observed. "The groups of people moving in are not Catholic."

The study group also addressed the issue of parish configurations and worked to find ways city churches can collaborate in their ministries to maximize resources and not duplicate services, he added.

"Are we configuring ourselves within the city in a way that makes sense?" was one of the group’s main questions, Grizard explained.

The answers to those questions were part of the group’s multiple recommendations, he added, some of which the bishop has already begun implementing, including the hiring of additional staff. In a Nov. 6 letter to diocesan pastors and pastoral administrators, Bishop Clark announced the appointment of Sister of Mercy Janet Korn as urban-ministry coordinator and Thomas Kubus, chairman of Peace of Christ Parish’s finance committee, as diocesan finance coordinator focused on working with urban parishes. The bishop’s letter explained that Sister Korn’s experience with Project Unity, which built relationships among urban, suburban and rural parishes, as well as her experience with the JustFaith initiative make her well-suited for the new position.

"Through these actions and the work in urban ministry yet to come, I affirm the value of an urban church comprised of vital and responsive faith communities which serve Christ ‘in the least of our brothers and sisters,’" Bishop Clark stated in his letter. "We honor the diversity of cultures in our midst and embrace a preferential option for the poor."

The group’s other recommendations are:

Father Robert Schrader, Peace of Christ’s pastor and head of the diocese’s Presbyteral Council, said one of the key points in the recommendations is that the diocese as a whole must work together to maintain a Catholic presence in Rochester.