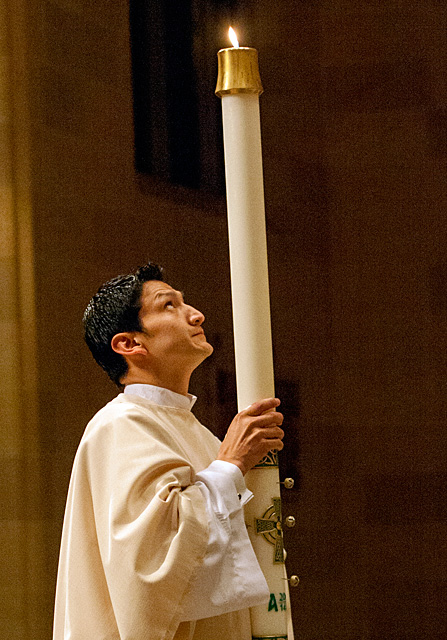 The two men who will be ordained next month have traveled very different paths on their journey to priesthood.

Deacon Sergio Chávez was among the first seminarians to move to Rochester from their native Colombia as part of an initiative to increase the ranks of diocesan priests in general, but specifically to address the spiritual needs of the diocese’s growing Latino population.

Deacon Peter Van Lieshout, who grew up in Livonia, was struck by the idea of becoming a priest as he listened to a homily by Pope John Paul II at World Youth Day in Toronto in 2002. Yet he didn’t enter seminary until graduating six years later from Franciscan University in Steubenville.

As the moment of their ordinations nears, both men say they are filled with gratitude and humility.

"I was born to become a priest, and now the moment is almost here. It is a sensation of fulfillment, happiness and gladness," Deacon Chávez wrote in an e-mail from Washington D.C., where he is finishing his studies at the Theological College at Catholic University of America. "Every time I think (of) the moment of my ordination, the grace of God fills my heart with a joy that cannot be defined just in human words. Nevertheless, one of the most precious feelings I treasure in my heart is that of gratitude towards those that work hard along with me to make it possible."

"The additional obligations of the priestly office are not to be taken lightly, and I am very conscious of the seriousness with which I must prepare for the responsibilities I will have," Deacon Van Lieshout wrote in an e-mail from Rome, Italy, where he is finishing studies at North American College. "I approach my ordination to the priesthood with a real excitement, but mixed with a certain holy reserve, given the tremendous task ahead of the care of souls."

The two men, who were seminarians under Bishop Emeritus Matthew H. Clark, will be ordained at 10:30 a.m. June 21 at Sacred Heart Cathedral by Bishop Salvatore R. Matano.

"That’s the beautiful thing about our promise of obedience — it passes from one Ordinary (diocesan bishop) to the next," Deacon Van Lieshout added. "But what remains constant is that through their apostolic succession, we remain connected to that original apostolic band, with St. Peter’s office as the visible principle of unity, and ultimately attached to Christ himself. … This is the Catholic and apostolic faith and I am privileged to be called to participate in this unity in an intimate way as a priest of Jesus Christ."

Deacon Chávez said that he feels blessed to have the support of both bishops.

"Bishop Clark was one of the first persons that (put) his trust in me," he said. "He ordained me as a deacon and became a good friend and example to me. Bishop Matano is going to ordain me to the order of priesthood. He has been very encouraging and supportive. His advice and kindness manifests his love for the Church, the Diocese of Rochester, his priests and seminarians, and the people of God."

Both men also acknowledged the challenge of preparing for ordination while finishing their studies.

"On the practical side, there is the difficultly of preparing for the events of ordination weekend while residing overseas, but my family members, especially my mom, are really helpful in organizing things for me at home," said Deacon Van Lieshout, 27. "In terms of spiritual preparation, the important thing for me will be to maintain my discipline of daily prayer while looking ahead to ordination and begging God for the graces I need to be a good priest."

"It has not been an easy task," agreed Deacon Chávez, 28. "It would have been impossible to prepare everything for my ordination alone. There are many people involved. All of them are helping me in their own way. It is a blessing and a grace to be surrounded by such a special community. They know who they are and to all of them my sincerest gratitude."

Deacon Chávez and seminarian Jorge Ramírez, who is completing his pastoral year at Holy Trinity Parish in Webster, were the first of several seminarians who came to Rochester from Colombia five years ago as part of a collaboration with the Diocese of Medellín. Deacon Chávez, who was born in Bogota but raised in a small town called Uvita Boyaca, began his theology studies at Universidad Luís Amigo and then took some time to study engineering. But after discussions with a priest from Medellín, he returned to his theology studies and later was offered the opportunity to move to Rochester.

Bernard Grizard, director of the Office of Parish & Clergy services, said he would label the collaboration a success, considering that half of the eight men in priestly formation will be ordained this year, either as a priest or as transitional deacons.

"This (initiative) offers a great richness for the diocese given their cultural backgrounds and life experiences from South America," he said. "For me, it’s such a great success story."

Deacon Van Lieshout said he also has great hopes that the Colombian collaboration will bear fruit for the diocese.

"Ministry to Hispanics is becoming a huge part of the normal life of U.S. Catholic dioceses, and our Colombian brothers will have a obvious role to play in assisting us and teaching us," he said.

Grizard added that the initiative puts the diocese in a better place because all the men possess a deep spirituality, a world view and a desire to work in ministry with the local church.

"On a broader level, it connects us with the universal church, especially with the pope being from South America," he said.

Carol Dady, diocesan coordinator of priesthood vocations awareness, said she also has been impressed with the Colombian seminarians’ work ethic and generosity in "leaving their families and their homes to serve here."

"Honestly, my decision of becoming a minister for the Diocese Rochester has been one of the most important choices in my life," Chávez said. "I do not have any regrets in my heart. On the contrary, this is now my home and I love this home."