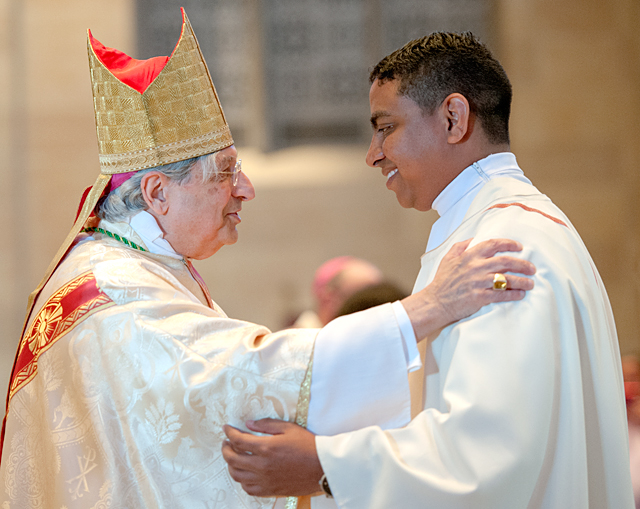 ROCHESTER — While kneeling on the floor of Sacred Heart Cathedral during his June 4 ordination, Father Justin Miller shed tears of joy as his fellow priests laid their hands on him.

"I wanted their blessing," he recalled feeling in that moment, which he described as "very, very moving."

Father Ramírez said he felt grateful that his two brothers and other family members traveled from Colombia to share in his special day. He also experienced an emotional moment when he looked around the church and saw two empty chairs and thought of his deceased parents filling them.

"I felt spiritually that they were here with me," Father Ramírez said.

While Father Viloria’s family members from Colombia were not able to attend, several close friends did make the trip, and he also was surrounded by friends from the diocesan parishes in which he has worked.

Father Viloria, 34, said he was overcome with emotion as he felt the support not only from his friends and parish communities but from the entire congregation as it broke out in applause after the three men were ordained.

"I was feeling the love of the people," he said.

He said he also felt a sense of peace when the moment of ordination arrived after all the waiting and preparation to get to this day.

"When I went to sit down in the chair (on the altar) after the ordination and looked out at the church, you work hard and I can’t believe I was sitting down as a priest," said Father Viloria, who was recently appointed parochial vicar for Ss. Mary and Martha Church in Auburn. "The Lord gives me his community to serve now. That was a powerful moment."

"For the first time, we hold out hands out … to say the words of consecration, I was very much trembling," added Father Miller, who will begin his ministry as parochial vicar at St. Joseph and Holy Spirit parishes in Penfield.

Father Ramírez, 35, said the anointing of hands that allowed the new priests to offer that consecration stood out for him.

"For me, it is priest … to share this bread of life, receive Jesus in the most holy sacrament we have," said Father Ramírez, who will now serve as parochial vicar for Holy Cross Church in Rochester.

In his homily, Bishop Matano spoke of the sacrifice of the Eucharist.

To close his homily, he reminded the newly ordained priests of the words Pope Francis spoke during a recent Mass of ordination.

"Always remember the example of the Good Shepherd who came not to be served but to serve and to seek out those who were lost," the bishop said.

"The Lord brought him here to be a good shepherd," he noted.

Father Ramírez’s aunt, Solangela Velásquez Cardona, said she was grateful to the Lord that she was able to witness both his ordination as transitional deacon and as a priest.

"I don’t have words to express the happiness I feel," she said, "that finally … he reached his lifelong dream," .

Father Miller’s parents, Carol and Milan Miller of Springville, said they also felt joy and pride for their son. More than 60 family members, including six siblings, also attended the ordination.

"He has pursued this with so much eagerness and ambition and faith," said his mother.

"He’s had a lot of people who helped him along the way," his father added. "We are glad they could all be here to share in this beginning."