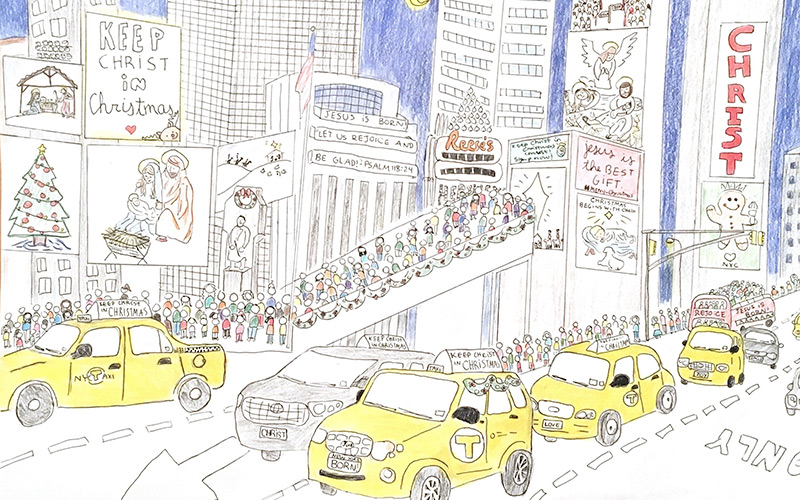 With tall buildings filling the skyline, and taxi cabs and crowds of pedestrians lining the streets, Clara Alcolea’s rendering of a large metropolis offers remarkable detail for a young teenage artist.

Perhaps even more impressive than Clara’s creative flair is the important theme she reinforces throughout her illustration: “Keep Christ in Christmas” signs on the top of each cab; the words “Christ,” “Love,” “Born,” “Joy” and “Rejoice” are on vehicles’ license plates; and signs on buildings feature Nativity scenes, the three Wise Men following the Star of Bethlehem, and other references to the birth of Jesus.

These stirring messages, combined with Clara’s artistic prowess, have resulted in major acclaim for her work: Earlier this year, she was named an international winner in the Knights of Columbus Keep Christ in Christmas poster contest.

Representing the Knights’ Council 277 at Ithaca’s Immaculate Conception Parish, Clara advanced through the 2018 contest’s state and national levels before her poster was judged the best worldwide in the age 11-14 category, the contest’s oldest age group. Clara, a native of Spain, was notified of her Knights of Columbus award in the spring.

Now 14 years old, Clara told the Catholic Courier that her poster idea began forming as a seventh-grader; she completed and submitted her entry a year later. She said she was influenced by firsthand observances of the hustle and bustle of Times Square with her family.

“Because New York City is such a tourist attraction, and we are from Spain, going to visit it was such a big experience,” she said.

For her poster, Clara said she sought to reproduce “an iconic city that would pretty much represent the whole United States” — and her time in New York City quickly came to mind.

“I was hoping to find an environment in which Christ was missing the most during Christmas,” she explained, noting that she focused on Times Square due to its being “so commercial and so object-centered.” She designed her poster to convert the typically commercial aspects of Times Square into Christmas messages.

“Making Christ present in all of the advertisements and screens would be the perfect action to help everyone find true happiness in their everyday lives,” she said.

Using crayons and colored pencils, Clara worked daily on the poster as last year’s deadline approached — “sometimes even before school or whenever I got a chance,” she said. “Every time I looked at my poster, I came up with new ideas. I had a lot of fun.”

When the 11-by-22-inch poster was finally ready to be submitted, “I felt very impressed and proud, as well as satisfied,” Clara said. “I looked at it a lot after I finished the whole drawing.”

Clara has seemingly inherited the creative abilities of her father, Ruben, a professional architect from Spain who has been a visiting architecture professor at Cornell University since 2016. Beginning that year, Clara and her family — which also comprises her mother, Neus Vila, and brothers Pau, 15, and Marc, 12 — have resided in Ithaca during the school year, returning home to Spain during the summer months.

A ninth-grader at Ithaca High School, Clara is fluent in both English and Spanish. Her family belongs to Immaculate Conception, where she is a parish youth-group member. During a Sunday Mass at the church last June, she was honored by Council 277 for her winning poster.

Clara is unable to take part in the annual Knights of Columbus competition this year because she has reached the upper age limit. However, as a new Christmas approaches, she and her family can still cherish the honor of being named the world’s best.

“When we first heard about it, we were shocked,” Clara recalled. “I didn’t know that I was going to place so high up in the contest. When we read the (notification) letter, we were very surprised and excited, and everyone in my family was jumping around and congratulating me. I was very happy.”