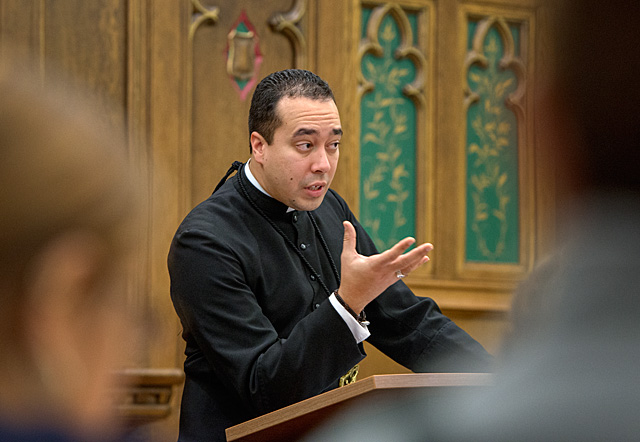 PITTSFORD — When Solomán Monde de Oca lost his wife to cancer a year ago, he made the decision to get more involved at church.

A former Holy Family parishioner, he had begun attending Mass at Holy Apostles Church in recent years. The Ecuador native has lived in Rochester for 23 years.

"I want to start getting involved in the community and be a help in some way," he said.

As part of that goal, Monde de Oca decided to enroll in the first conference offered by the diocese’s El Instituto Pastoral Hispano held Nov. 22 at St. Bernard’s School of Theology & Ministry.

More than 60 people from the city parishes took part in the daylong event led by Father David Muñoz of Buffalo. The leadership conference’s theme was "Sent to Build the Kingdom."

A native of Puerto Rico, Father Muñoz grew up in Florida and is a member of the Missionary Oblates of Immaculate Mary. He was ordained in San Antonio, Texas, in 2010 and initially worked at a Laredo parish. He currently serves as a parochial vicar with Holy Angels, Holy Cross and Our Lady of Hope churches in Buffalo.

As someone who has moved between the Anglo and Latino communities at different parishes, Monde de Oca said that Father Muñoz’s message that parish communities must learn to be welcoming and adapt to different cultures is a very important one for the Catholic Church.

"We can clearly see that this (diversity) is the future," he added.

Embracing and respecting new cultural aspects of liturgy is part of the new evangelization, noted Father Muñoz. Lay ministers can accomplish this by approaching members of other cultures to learn of their customs, he added.

"The liturgy lends itself to creativity, and we have to put that creativity into practice within its limits so that it fulfills what Christ has fulfilled with us: Building the kingdom of God here on earth," he said. "Culture can energize a person to get closer to God. (But) it should not become a ‘show.’ That point is most important."

Liturgy is a gift from God, and lay ministers can help ensure there are no distractions from its central focus, which is Jesus, noted Father Muñoz.

"The redemptive act of the son is the liturgy’s culmination," he added.

During his presentation, he also focused on the foundations of liturgy based on Scripture, the Sancrosanctum Concilium from Vatican II, catechism passages and encyclicals from Pope John Paul II.

"And you thought the liturgy is simple," he said to laughter from the crowd.

Father Muñoz’s depth of knowledge and presentation style were among the reasons why diocesan staff invited him to lead the conference, explained Lynette Saenz, director of the institute for the diocese’s Parish & Clergy Services.

Initially, the event organizers, who included Elizabeth Johnston and Deacons Nemesio "Vellon" Martínez and Bienvenido DeJesus, planned to have Father Muñoz lead a couple of workshops, Saenz added. But because the Instituto is celebrating its 25th anniversary this year, they made the switch to host its first conference, she said.

"We wanted this to be a joyful celebration and recognize the present and future of the instituto," Saenz remarked.

She said that she got to know Father Muñoz through the institute’s work in creating a similar program for Latino parishioners in the Buffalo diocese. His areas of expertise include leadership and prayer, and offering a day of formation in those areas improves the lay leadership for the diocese’s Latino parish communities, Saenz explained.

"We need to form ourselves so we can go out and evangelize," she said.

Creating a structure to offer special programs in the fall and spring also serves as a good lead-in for the institute’s new summer schedule, she added.

The Nov. 22 conference included a tour of the St. Bernard’s campus and presentation of recognition awards for three parish volunteers:

* Lillian Cotto, from Holy Apostles, for serving in several ministries including lector, retreat presenter, prayer circle and extraordinary minister of holy Communion who brings the Eucharist to the sick.

* José Avilés, from Our Lady of the Americas Church, for serving as lector, commentator, facilitator for the St. Ignatius Exercises and a leader for eucharistic adoration.

* Victoria Muriel, St. Michael Church, for serving her community for more than 36 years as a youth minister, lector and extraordinary minister of holy Communion, as well as visiting with the sick and those who are in jail.