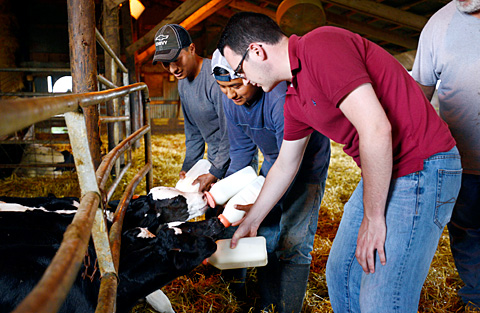 CALEDONIA — Milking cows may not quite define cultural immersion.

But that’s exactly what three of the diocese’s seminarians found themselves doing this past summer at a local dairy farm as part of a new immersion program. During their July 9 visit to a local farm, Michael Harris and Mike Merritt snapped on purple gloves during a tour of the milking barn and set the suction machines under the cows as they watched the milk collect in a small silver tank below.

They then walked over to the "maternity barn" where a newborn calf sat with its mother in one corner. On the other side of the barn, the seminarians fed other calves with large baby bottles.

The visit was part of a six-week summer program to acclimate a group of five seminarians to all areas of the 12-county diocese, said Carol Dady, the diocese’s coordinator of priesthood vocation awareness.

"The (immersion) program was really wonderful," Chichester said in an e-mail. "It opened my eyes to the great variety of magnificent people that comprise the diocese. I think that sometimes it is easy for one to become myopic when there is too much focus on the immediate parish communities in which we live. But as soon as one experiences the broader diocesan community in a manner such as we did, I believe that their perspective of the world around them will inevitably change for the better."

"We have been all over the diocese," said Merritt. "It’s quite diverse. … In the city, we’ve been to places we wouldn’t normally go to or even knew existed. It’s good (for us) to see that firsthand."

Such exposure also will help them following ordination, said Merritt, so they know how to direct parishioners who want to help people in need.

"We will have the contacts and can keep these programs in mind," he said.

Throughout the six weeks, the seminarians also spent hours every day learning Spanish at St. Bernard’s School of Theology and Ministry in Pittsford in recognition of the growing Hispanic community in the diocese, Dady noted.

Chichester said that the Spanish classes and interactions with native speakers refreshed his knowledge of the language he studied in college. Being bilingual also will be important in the seminarians’ future work in ministry, he noted.

"I believe that it is very important for a priest to be able to communicate with as many people as possible; certainly in regards to relating the message of Christ to as many people as possible," he said. "Knowledge of the Spanish language … will also allow a priest to understand the needs of those he serves in the broader community better and allow him to serve in the best possible way."

In previous years, seminarians were sent for culture immersion and language study to such countries as Colombia, from which many current seminarians hail from, Dady said.

"But we have such a wealth of cultural diversity in our own diocese, which really (the seminarians) could relate to more in ministry," she said. "The Spanish language component is still an important piece so we incorporated that into the program."

Currently, the diocese has few priests it can call on to fill in and say a Mass in Spanish, she added.

Misael, a worker at the Caledonia farm who did not wish to give his last name, said that he was happy to talk with seminarians and help them practice their Spanish during the July 9 dairy farm visit. In addition to learning about farm operations, the seminarians had dinner with the migrant workers.

"Yes, it’s great to help them learn (Spanish) as well as it’s important for us to learn English too," noted Misael, who also speaks a third language from his native Guatemala.

Being exposed to the challenges of migrant labor and interacting with the workers also will help them help others to appreciate what these workers contribute to the region, said Harris.

"This is such a consumer culture we live in, but coming here and see how milk is made and processed, it makes you think what it is these (workers) do and how they make a living," he said.