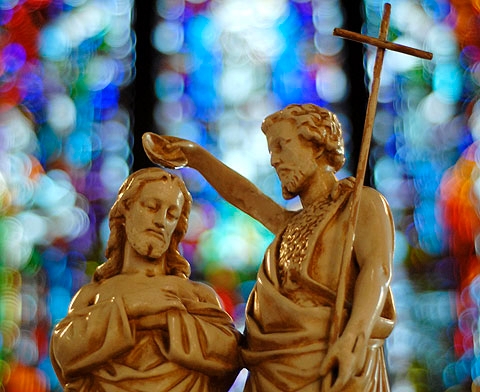 ROCHESTER — During the annual celebration of the feast of St. John the Baptist, the patron saint of Puerto Rico, Father Laurence Tracy explained an important role the saint played during his lifetime.

"He came to announce a new way of life," noted Father Tracy. "But he also denounced the evils of society."

And such evils persist in the Rochester community with the shootings that took place in June and took the lives of several young people, he added, so church and community leaders should lead as St. John the Baptist did and serve as a voice "crying in the desert" for those who suffer from such violence.

All Catholics can accomplish this by proclaiming the word of Jesus wherever they go, concurred Deacon Bienvenido "Benny" DeJesus during the June 22 Mass.

"We must be the path that leads to Jesus," he said. "Be the voice that proclaims Jesus. Be the light that shines."

St. John the Baptist’s very name means "Yahweh has mercy," explained Deacon DeJesus during the homily. And his parents’ break from tradition to give him not a family name but one that praises God also illustrated the unique path their son’s life would take, he added.

"A name offers a message, a way of life," Deacon DeJesus remarked. "John is the fulfillment of God’s grace to a good family, to a people who were waiting for the Messiah."

St. John the Baptist’s feast day also is unique because his birthday is only one of three celebrated during the church calendar; the others are that of Mary and Jesus, explained Deacon David Palma.

"John’s birth was the fruit of the Lord’s compassion," added Deacon DeJesus. "God always plays a role in the birth of his servants."