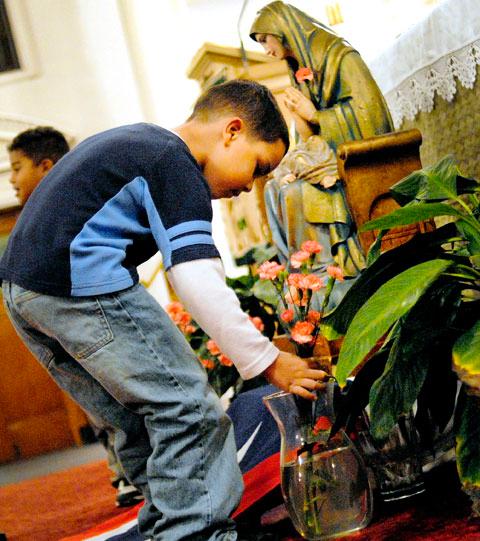 ROCHESTER — Francisca "Paquita" Castro has not visited her native Puerto Rico in three decades, but the annual Mass to celebrate the feast day of the island’s patroness, Nuestra Señora de la Providencia, prompts her to recall the day’s festive atmosphere in her hometown.

The Mass at Our Lady of Perpetual Help Church also had special significance for Castro because her husband had arranged for a friend to purchase a portrait of Our Lady of Providencia as a Mother’s Day gift earlier this year. Father Laurence Tracy blessed the portrait just before the conclusion of the Mass and held it aloft as the more than 70 people in attendance applauded.

Deacon Salvador Otero said that even though the Mass was a celebration of the patroness of Puerto Rico, all people can celebrate the feast in honor of Mary as a woman, a mother and a wife of faith.

He has trouble, though, understanding Christians who doubt the sanctity of Mary, who say that she was a simple woman and nothing more.

He said the Catechism of the Catholic Church has as many as 30 references to the Virgin Mary, exemplifying the significance of Mary in the faith tradition. He noted how she was born without sin and maintained her faith and obedience to God despite the many struggles and pain she endured as the mother of Jesus.

Her role as mother also should help guide parents today as they face the many challenges in keeping their children on the right paths, he noted. Some children even turn away from the faith, Deacon Otero added.

Catholics need to talk to their children and explain why they pray the rosary, why they honor Mary and why they celebrate such feast days as Providencia, he added.