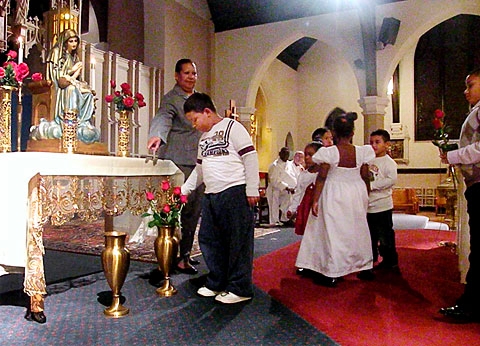 ROCHESTER — It was a family affair for the DeJesus clan during the annual Mass in honor of Our Lady of Providencia, the patroness of Puerto Rico, held at Our Lady of the Americas Church.

Deacon Bienvenido DeJesus said the homily during the Nov. 18 Mass. His daughter, Ivelisse DeJesus, welcomed the congregation. And his grandchildren were among the children who placed flowers in front of the Providencia image in a procession following Communion.

The feast day is a celebration of a miracle, Deacon DeJesus said in explaining the history of the devotion, which began in Spain when Mary provided food for a group of friars who had nothing to eat. In Puerto Rico, the feast day was originally Jan. 2 but was changed to Nov. 19 by Pope Paul VI in 1969 to coincide with the date that the island was discovered, he added. The wooden image of Our Lady of Providencia was burned in 1976 prior to its coronation but that only increased the fervor of devotion to Mary, the deacon noted.

And the Bible proves how blessed Mary is when the angel Gabriel appeared to her, he remarked.

"Mary was chosen and favored by God," Deacon DeJesus added. "And what God chooses and favors, no one on earth on in heaven can stain in any way."

When the tradition of going from house to house to pray the rosary on the island takes place, the image of Providencia maintains its special role in the faith of the Puerto Rican people, he said.

And her faithful response to God’s call despite all the suffering she knew was to follow as the mother of Jesus is one that Catholics everywhere should follow, added Deacon DeJesus.

"She carried that pain and that sorrow but always stood with Jesus to support him as he completed his work on earth," he said.

And Jesus rewards those who choose to follow him, Deacon DeJesus noted, citing the example of Jesus telling his beloved apostle at the foot of his cross that Mary was now his mother.

"(Jesus) is saying Mary is our mother," he said.

In honoring Mary, these annual celebrations also unite communities, noted Alex Cintrón, a Holy Apostles parishioner, as the choirs from his church on the west side of the city joined with the Our Lady of the Americas choir on the east side for the Our Lady of Providencia Mass.

"It means the spirit is getting together," he said. "Jesus is everywhere."