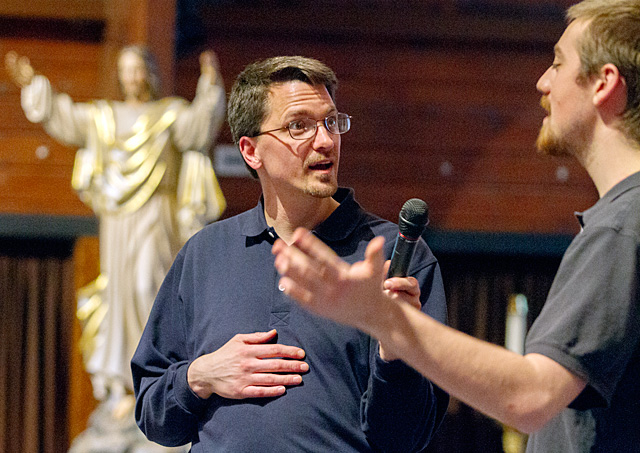 Dominic Salamida listens while Aaron van Dyne talks about the effect that participating in ChristLife had on his faith during the last session of the first part of the program April 10 at St. Leo Church in Hilton.

ROCHESTER — Hands linked, arms slightly upraised, the women prayed around a table at Holy Apostles Missionary Center on a Saturday afternoon in March.

Their prayers melded together with prayers from other tables around them, like the murmur of an unceasing conversation. As one woman brought forth a petition of prayer, it was echoed by each woman around the table.

The communal prayer brought out tears, heartfelt sentiment and honesty. It was the culmination of a daylong retreat with the ChristLife program, which aims to teach people about the foundations of the Catholic faith.

The program has drawn the interest of three local parishes: Holy Apostles in Rochester and St. Leo in Hilton presented ChristLife this spring, and St. Frances Xavier Cabrini Parish in Rochester will present the program in the fall.

ChristLife is a lay Catholic ministry that is an apostolate of the Archdiocese of Baltimore. It takes place over a series of three seven-week sessions that follow the themes Discovering Christ, Following Christ and Sharing Christ.

Discovering Christ, for instance, aims to help people develop personal relationships with others and to get to know Jesus personally through a series of questions that include: "What is the meaning of life?" "Why does Jesus matter?" "What does Jesus want us to know?" and "Why do I need a savior?"

Those taking part in the program are called guests who are being invited into a church home, where they are encouraged to make friends with others over a meal. More than 15,000 guests in seven countries have completed Discovering Christ, according to the ChristLife website, www.christlife.org.

Father McGrath said the need for evangelization training grew out of conversations some priests were having following a period of church consolidations and closings. He called that time a desert for local parishes, and he said he felt like he lacked a road map to get out of the desert.

"After a while, we began to realize there’s no plan for growth," he said.

When Father McGrath saw an ad for the ChristLife program on a Catholic news website, and looked into it further, he said the program seemed to be what his parish needed.

"We need to have everybody in the parish become a missionary," Father McGrath said.

Father McGrath shared information about the program with several other priests, including Father Tony Mugavero, pastor of Holy Apostles in Rochester, who decided to bring a group of parishioners to training in Baltimore in the fall to kick off the effort at his parish.

"As they walked us through that program, it was a very prayerful atmosphere," Salamida said. "I just found myself, I’m just nodding my head yes. Everything seemed like everything fit together so beautifully to help people grow in their ministry and in their sharing Christ."

Father Mugavero said the goal is to bring Jesus’ message to more people outside of the church. He said one benefit of ChristLife is that it doesn’t make assumptions about what people know about their faith.

"It deals with the very basics of our faith," Father Mugavero said. "It talks about what’s the meaning of life and why is Jesus up to that. What does Jesus want us to know, and why do we need a savior?"

That focus has helped the program already attract people who are seeking faith, Father Mugavero said.

"For me, it has been a huge source of comfort for a difficult time in my life," Stacey Elliott of West Henrietta said of ChristLife. "These ladies quickly have become a small family. I joined late, just three weeks ago, but I’ve just experienced tremendous growth of my faith and on a personal level as well."

Yet existing parishioners say the program has benefits for them as well. They raved about what ChristLife has done for them.

"Anyone can go to Mass and go through the motions of Mass," said Kelvin James, a Holy Apostles parishioner. He said the ChristLife program has helped to make Mass more meaningful for him and helped him to be more attentive.

Ultimately, ChristLife teaches its guests what it means to bring Christ into their lives, he said.

"This is one of the most rewarding experiences that I have ever had," James remarked.

Salamida said at St. Leo, most who took part in the parish’s first session of Discovering Christ were parishioners, but about 25 percent were people who had been invited from outside the parish.

"Our intention is to do it every year," Salamida said of the program. "All of us know people that we either want to introduce to Christ or introduce to the Catholic Church."