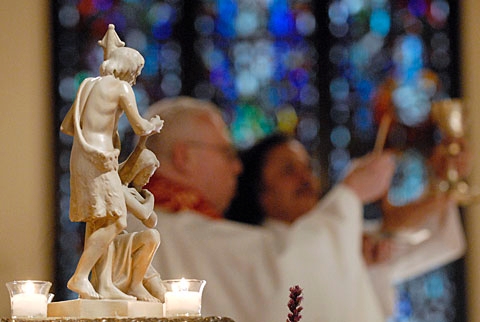 ROCHESTER — St. John the Baptist did not have the persona that we typically associate with saints: loving, gentle and caring.

Father Laurence Tracy explained that John the Baptist — as a prophet — told it like it was as he urged those around him to repent from their sin and turn to Jesus.

"If the people didn’t like it, too bad," he added.

In that vein, during the annual St. John the Baptist Mass June 24 at Our Lady of the Americas Church, which is part of St. Francis Xavier Cabrini Parish, Father Tracy charged the 60 people before him with a new mission.

St. John the Baptist also is the patron saint of Puerto Rico and is celebrated to this day by people in his native Puerto Rico by grand celebrations on the island, explained Deacon Nemesio Martínez.

Father Tracy explained that as Catholic Christians, the Latino community has a great role model to follow in St. John the Baptist.

"God graces us with the power to be a prophet," Father Tracy added. "And where are we? We don’t hear that voice. We don’t hear such prophecy. … But, now we have a great opportunity for all of you to be prophets."

Next year, when Bishop Matthew H. Clark retires, a new bishop will lead the diocese and no one yet knows who that will be, he explained.

So, there is time to prepare a mandate from the Latino community to call for a socially just church in the city of Rochester that cares for the marginalized, dedicates more resources to the urban community inside and outside the walls of the church, and provides culturally sensitive faith formation, he said.

"Some will criticize us (for being so bold), noted Father Tracy. "But, there was little love for St. John the Baptist either."

Following the Mass, Deacon José Berrios said that Father Tracy had an important message for the community to ensure the new bishop hears the Latino voice and does more to reach out to the community.

"I found (his message) very encouraging and believe that the Latino community for a while has been asking for representation, action, recognition, respect and equal treatment," Deacon Berrios wrote in an e-mail. "As he mentioned, we are not talking about a minority anymore but a considerable population of residents who have an impact on the local community, politics and of course, the faith."

"On the other hand, I understand that there are other groups to attend to as well," he added. "However, we have to start somewhere."