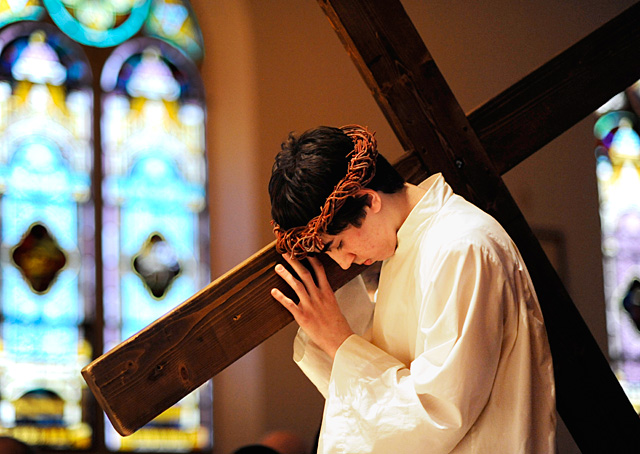 These are just a few of the many ways Catholics in the Diocese of Rochester are able to pray the Stations of the Cross, a Lenten devotion that reflects on Jesus’ passion and crucifixion. This devotion has its roots in the third century, according to Father George Heyman, director of community education at St. Bernard’s School of Theology and Ministry in Pittsford. The practice of walking in Jesus’ steps began when St. Helen decided to visit Jerusalem’s holy sites, he said, and by the late fourth century many early Christians were taking part in processions to those various sites around Jerusalem during Holy Week.

Such pilgrimages really became a devotional practice around the mid-14th century, and the term "stations" was first coined in the 15th century, although at that time there were as many as 37 stations, or stops, along Jesus’ journey, Father Heyman said.

"Pope Innocent XI permitted the Franciscans in 1686 to erect physical displays of these stations in all their churches," he said. "Pope Clement XII allowed all churches to have stations and fixed the number at 14. (Pope) Benedict XIV specifically urged every church in 1742 to enrich its sanctuary with stations."

This devotion, sometimes referred to as the Way of the Cross, has probably remained popular throughout all these centuries because it taps into the heart of the Catholic faith, suggested Father William Leone, pastor of St. Jerome Parish in East Rochester. Tracing Jesus’ steps up Calvary, including his suffering and his three falls, reminds us of our own weaknesses, he said.

"I think our Lord’s actually falling three times as he bore the cross tells us the important thing is not so much that we’re tempted or that we sin, but through the sacraments, especially the sacrament of reconciliation, we can get up and be forgiven and go on our way," Father Leone said.

Praying the Stations of the Cross gives people a chance to feel like they’re part of Christ’s sacrifice, added Deacon George Kozak, deacon at the All Saints/Holy Cross/St. Anthony cluster in Tompkins County.

"People feel the need to be part of the sacrifice of Christ as a way of expressing their love for Jesus and what he did for us," he explained. "Just like when we want to be there to support a loved one who is hurt or in pain … so we wish to take some of the pain and burden from Christ and put it on ourselves."

Virtually every parish offers the Stations of the Cross in one form or another during Lent. Many parishes invite parishioners to come to the church once a week during Lent, often on Fridays, to pray and reflect together at each of the stations on the churches’ walls. At Church of the Assumption in Fairport various ministries and committees take turns leading the devotion each week, and members of those groups will be narrating the stations, said Janie Marini, the parish’s music director. These leaders also will offer brief reflections for each station and try to draw correlations between the stations and modern-day Catholics’ lives, she added.

"We’re trying to get people to know this is not just a journey that Jesus took so many years ago, but we are still on a journey that we take every day," Marini said.

Sometimes the devotion is geared toward a particular segment of the parish’s population, such as the Children’s Stations of the Cross offered at St. Peter Parish in Shortsville, Phelps and Clifton Springs. Offered once a week, the narration and reflections are given in language kindergartners can understand. This family-oriented devotion is a good way to help young children understand the events of Holy Week, and also to catechize parents who may not be familiar with the Stations of the Cross, said Sherry Brown, faith-formation and youth-ministry coordinator for St. Peter Parish.

The stations also provide a teaching moment for parents, provided their children are old enough to understand what they’re hearing without becoming scared, noted Deacon David Squilla, pastoral associate at St. John the Evangelist Parish in Spencerport. Children will be able to understand and absorb more about the stations as they get older. Teens at St. John get a very powerful experience when they actually carry a cross through the village of Spencerport while praying the Stations of the Cross each Good Friday, he added.

"It’s a biblical journey that helps me to reflect, serve penance and prepare for the upcoming Easter season," Perez said.

Participating in the Stations of the Cross with actions rather than just words makes the devotion more meaningful, opined Gretchen Micio, catechetical leader at St. Francis and St. Clare Parish in Waterloo and Seneca Falls. Each Lent the parish’s children and teens act out the stations in a Living Stations of the Cross. This is not a performance so much as it is a prayer, Micio stressed.

Teens at Church of the Resurrection in Fairport and St. Elizabeth Ann Seton Parish in Hamlin participate in Shadow Stations. These teens enact the stations behind screens, so people in the pews only see the shadows of Jesus and the other figures in each scene. This seems to cut down on distractions and emphasize the stations’ emotional impact, said Cathy Reitz, youth-ministry coordinator at Church of the Resurrection. The stations help Catholics center themselves around the core of their faith.

"Without the passion and death of Christ there is no resurrection," she said.