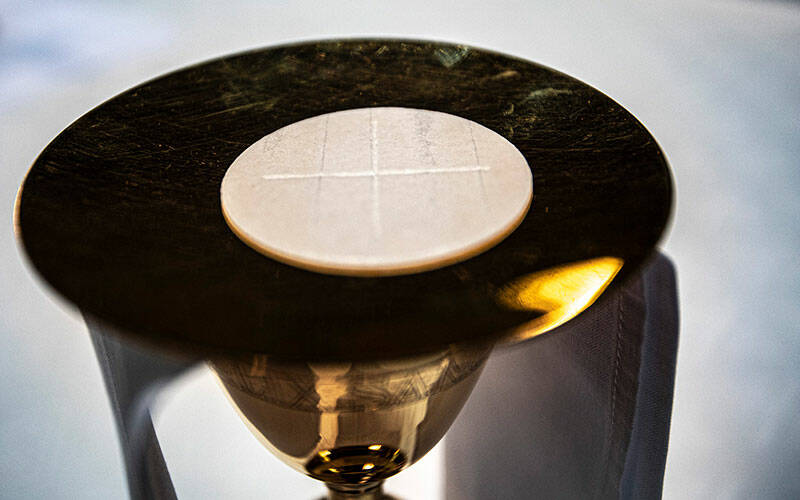 and sisters in Christ Jesus:

On June 19, 2022, the Solemnity of The Most Holy Body and Blood of Christ, Corpus Christi, we united with all (arch)dioceses throughout the United States in beginning our three-year Eucharistic Revival. I pray that while parish schedules are somewhat altered during the summer and religious-education and Catholic-school classes are not in regular session, the momentum for celebrating the Eucharistic Revival has not lessened.

Since the commencement of the Eucharistic Revival on June 19, our Holy Father, Pope Francis, has promulgated the beautiful Apostolic Letter entitled Desiderio Desideravi (I have earnestly desired, Luke 22:15) “on the liturgical formation of the people of God,” highlighting the great gift of the Most Holy Eucharist, and noting “the disproportion between the immensity of the gift and the smallness of the one who receives it is infinite, and cannot fail to surprise us” (Desiderio Desideravi, henceforth DD, 3).

The sacrificial love intrinsic to the Eucharist is so well expressed in the Apostolic Letter in these words: “The content of the bread broken is the cross of Jesus, his sacrifice of obedience out of love for the Father. If we had not had the Last Supper, that is to say, if we had not had the ritual anticipation of his death, we would have never been able to grasp how the carrying out of his being condemned to death could have been in fact the act of perfect worship, pleasing to the Father, the only true act of worship, the only true liturgy. Only a few hours after the Supper, the apostles could have seen in the cross of Jesus, if they could have borne the weight of it, what it meant for Jesus to say, ‘body offered,’ ‘blood poured out.’ It is this of which we make memorial in every Eucharist” (DD, 7).

Flowing from the Eucharistic celebration, as “it was from the side of Christ as He slept the sleep of death upon the cross that there came forth ‘the wondrous sacrament of the whole Church’” (DD 14), bursts forth the entire sacramental life of the Church. The Christ who made the lame to walk, the blind to see, the deaf to hear, called the dead back to life, forgave sinners, reached out to those scorned and on the fringes of society, the Christ who fed the multitudes is the very same Christ present in the Eucharist and in the Sacraments of the Church. Pope Francis very clearly recalls: “From the very beginning the Church had grasped, enlightened by the Holy Spirit, that that which was visible in Jesus, that which could be seen with the eyes and touched with the hands, his words and his gestures, the concreteness of the incarnate Word — everything of Him had passed into the celebration of the sacraments” (DD, 9).

Forever faithful to His promise to remain with us always “even to the end of the age” (Matthew 28:20), Jesus allows us, graciously permits us, lovingly invites us to encounter Him through the Sacraments of the Church. As did the Magi and shepherds who knelt at the crib in Bethlehem, those first disciples, the 12 apostles, and the crowds who followed Him along the shores of Galilee and to the Holy City Jerusalem, we encounter the very same, true and real Christ and enter into communion with Him. “The salvific power of the sacrifice of Jesus, his every word, his every gesture, glance, and feeling reaches us through the celebration of the sacraments. I am Nicodemus, the Samaritan woman at the well, the man possessed by demons at Capernaum, the paralytic in the house of Peter, the sinful woman pardoned, the woman afflicted by haemorrhages, the daughter of Jairus, the blind man of Jericho, Zacchaeus, Lazarus, the thief and Peter both pardoned. The Lord Jesus who dies no more, who lives forever with the signs of his Passion continues to pardon us, to heal us, to save us with the power of the sacraments. It is the concrete way, by means of his incarnation, that he loves us. It is the way in which he satisfies his own thirst for us that he had declared from the cross. (Jn 19:28)” (DD, 11).

The Most Holy Eucharist, the Sacraments of the Church, call us to unity in Christ Jesus. Humbled that Jesus Himself continues to accompany us in all the stages of our lives, at those times most difficult when He becomes our Simon of Cyrene and not only helps us shoulder our crosses but takes our burdens upon Himself, we come to appreciate we are being given a great gift that we did not create. “If Gnosticism intoxicates us with the poison of subjectivism, the liturgical celebration frees us from the prison of a self-referencing nourished by one’s own reasoning and one’s own feeling. The action of the celebration does not belong to the individual but to the Christ-Church, to the totality of the faithful united in Christ. The Liturgy does not say ‘I’ but ‘we,’ and any limitation on the breadth of this ‘we’ is always demonic. The Liturgy does not leave us alone to search out an individual supposed knowledge of the mystery of God. Rather, it takes us by the hand, together, as an assembly, to lead us deep within the mystery that the Word and the sacramental signs reveal to us. And it does this, consistent with all action of God, following the way of the Incarnation, that is, by means of the symbolic language of the body, which extends to things in space and time” (DD, 19).

In his contemplation, reflection upon Christ’s gift of the Most Holy Eucharist and the Church’s Sacraments, Pope Francis calls our attention to the uniqueness of our encounter with Jesus, which is more than special; it is transcendent. Our celebration must be attentive to this awesome communion with the Lord in which He envelops us with His love and draws us into His Sacred Heart. For this very reason, Pope Francis instructs us: “Let us be clear here: every aspect of the celebration must be carefully tended to (space, time, gestures, words, objects, vestments, song, music…) and every rubric must be observed. Such attention would be enough to prevent robbing from the assembly what is owed to it; namely, the paschal mystery celebrated according to the ritual that the Church sets down” (DD, 23). When we celebrate the Liturgy as intended by the Church, we come to know beauty which brings us to new heights of encounter. “Beauty, just like truth, always engenders wonder, and when these are referred to the mystery of God, they lead to adoration” (DD, 25).

In celebrating the Sacred Liturgy, Pope Francis explains that silence “occupies a place of absolute importance” in realizing and entering into the great encounter; “… silence moves to sorrow for sin and the desire for conversion. It awakens a readiness to hear the word and awakens prayer. It disposes us to adore the Body and Blood of Christ” (DD, 52). Likewise, “We kneel to ask pardon, to bend our pride, to hand over to God our tears, to beg his intervention, to thank him for a gift received.” (DD, 53).

In addressing the pastors of the Church, Pope Francis gives us sound advice about the ars celebrandi, the proper manner of celebrating the Holy Sacrifice of the Mass, which requires that the celebrant be humble before the Lord, who always must increase while he who acts in the person of Christ, like John the Baptist, stands in awe and in the shadow of the Eternal High Priest. Our Holy Father writes: “We could say that there are different ‘models’ of presiding. Here is a possible list of approaches, which even though opposed to each other, characterize a way of presiding that is certainly inadequate: rigid austerity or an exasperating creativity, a spiritualizing mysticism or a practical functionalism, a rushed briskness or an overemphasized slowness, a sloppy carelessness or an excessive finickiness, a superabundant friendliness or priestly impassibility. Granted the wide range of these examples, I think that the inadequacy of these models of presiding have a common root: a heightened personalism of the celebrating style which at times expresses a poorly concealed mania to be the centre of attention. Often this becomes more evident when our celebrations are transmitted over the air or online, something not always opportune and that needs further reflection” (DD, 54). He continues: “The priest lives his characteristic participation in the celebration in virtue of the gift received in the sacrament of Holy Orders, and this is expressed precisely in presiding. Like all the roles he is called to carry out, this is not primarily a duty assigned to him by the community but is rather a consequence of the outpouring of the Holy Spirit received in ordination which equips him for such a task. The priest also is formed by his presiding in the celebrating assembly” (DD, 56)

In his Apostolic Letter, Pope Francis clearly expresses his desire that the Sacred Liturgy, the celebration of Holy Mass, be the cause of our unity in Christ and that “the Church may lift up, in the variety of so many languages, one and the same prayer capable of expressing her unity. As I have written, I intend that this unity be re-established in the whole Church of the Roman Rite” (DD, 61). His Holiness continues: “Let us abandon our polemics to listen together to what the Spirit is saying to the Church. Let us safeguard our communion. Let us continue to be astonished at the beauty of the Liturgy. The Paschal Mystery has been given to us. Let us allow ourselves to be embraced by the desire that the Lord continues to have to eat His Passover with us. All this under the gaze of Mary, Mother of the Church” (DD, 65).

I conclude with the Letter of St. Francis of Assisi to the Entire Order, referenced by Pope Francis:

Let everyone be struck with fear, let the whole world tremble,

and let the heavens exult when Christ, the Son of the living God,

is present on the altar in the hands of a priest!

The Lord of the universe, God and the Son of God,

so humbles Himself that for our salvation

He hides Himself under an ordinary piece of bread!

Brothers, look at the humility of God,

and pour out your hearts before Him!

Humble yourselves that you may be exalted by Him!

that He Who gives Himself totally to you may receive you totally!

United with you in adoration of the Savior of humanity and imitating the faith and humility of Our Mother Mary, who allowed the Word to become flesh, I remain