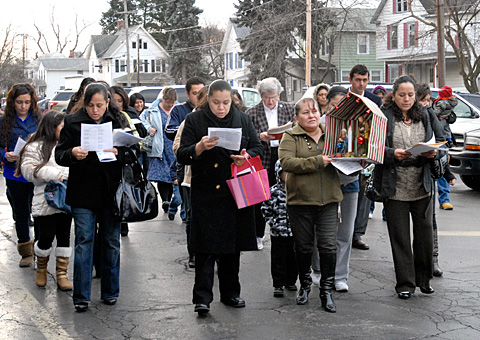 GENEVA — Celia Perez carried a small crèche with a red-and-green striped manger as she led a small group of parishioners across the parking lot of St. Francis de Sales Church to the parish center after the Spanish Mass.

Another group waited at the center entrance. When Perez reached the center doors, the two groups began a back-and-forth exchange to represent Joseph and Mary’s search for shelter in Bethlehem. The custom, which is commonly practiced in Mexico, is known as las posadas.

"God will repay for your grand charity and the heavens will be full of happiness," the group sang in the third of three pleas.

"Happy is the home that offers shelter this day to the virgin so pure, the beautiful Mary," the inside group sang in reply.

Upon those words, the doors then flew open and the two groups came together in a circle to sing several more Spanish-language Christmas hymns.

Marilu Segura said that the family receiving the group often brings out such traditional treats as buñuelos, a sweet tortilla-like fritter, as well as piñatas for the children.

"The homeowner … opens his doors and welcomes everyone and the party begins," added Segura.

Perez explained that this custom of posadas, which continue for the nine nights leading up to Christmas, was a tradition in the Mexican community of Geneva in the past and has been resurrected in recent years. She has lived in the area since 1999.

"We’ll wait and see if the people join in … to continue the tradition," she added.

Sister of Mercy Kay Schwenzer said that families had signed up for all nine nights in December to host the posadas in their homes.

And families from such other Latin American countries as Paraguay, Honduras and Puerto Rico also are taking part in las posadas, noted Sister Schwenzer, the Hispanic pastoral minister for Yates, Ontario and Wayne counties.

Rafael Díaz said that in his native Puerto Rico, families have a similar tradition called parrandas and includes musicians and lots of food.