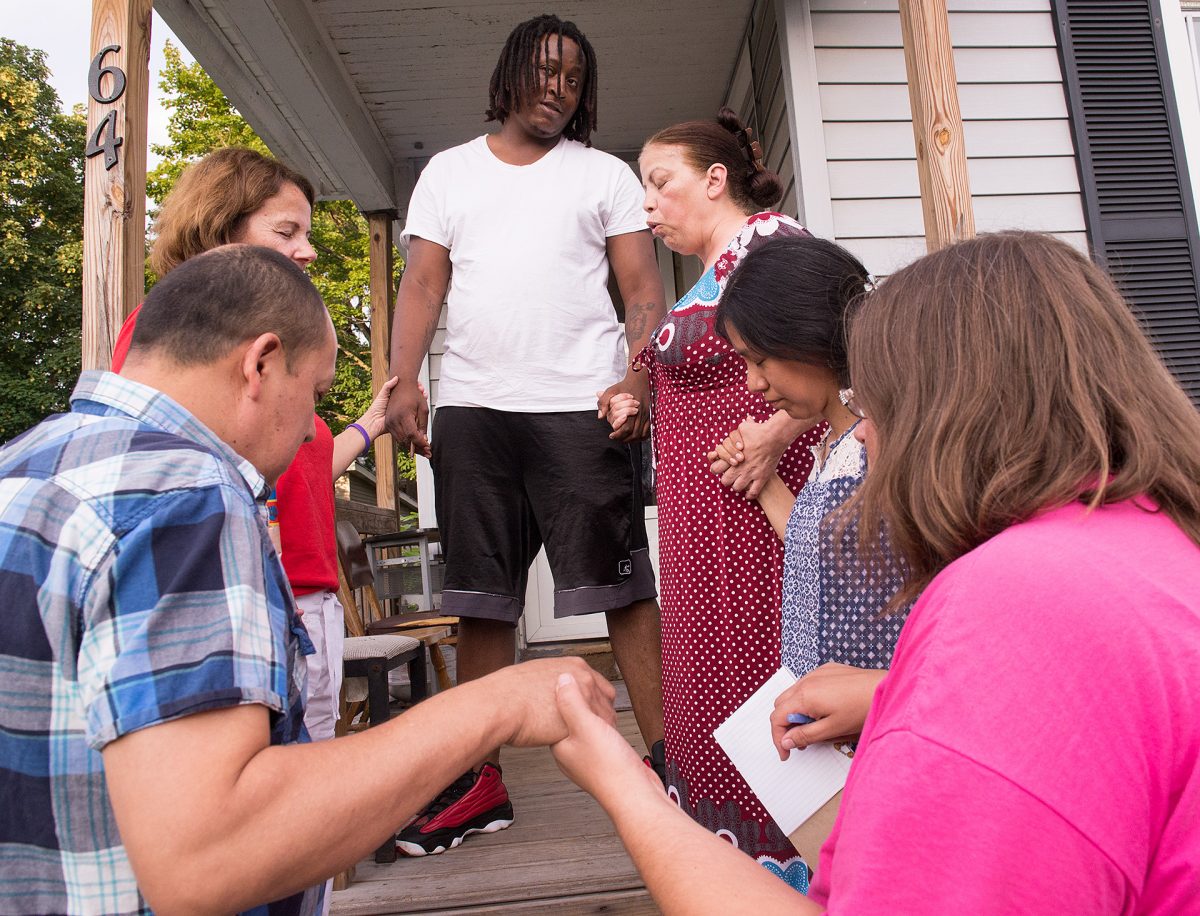 Holy Apostles Missionaries of Peace pray with ???? as they take to the street of Rochester on Aug 2. (EMC Photo by John Haeger)

ROCHESTER — A small group of parishioners from Holy Apostles Church approached three teenagers sitting on a porch on Warner Street in Rochester last month and asked if they wanted to pray for anything.

The boys replied that they needed jobs. So, they came down to the path in front of the house, joined hands in a circle with the church group and bowed their heads in prayer.

The Aug. 2 interaction was one of the many small miracles the parishioners say they experience weekly in the summer as members of the church’s “Missionaries of Peace” teams. Father Tony Mugavero, the pastor at Holy Apostles, said they began the evangelization effort four years ago with five people who had completed the ChristLife evangelization-training program, and it grew from there.

“Our neighborhood is a neighborhood that has a lot of challenges,” Father Mugavero said. “There are a lot of good people and lot of suffering, hurting people, who are on the fringes. There’s a lot of mental illness. (The neighborhood) is kind of ripe for God.”

From July to August, about 20 to 30 parishioners volunteer to go out to the church’s neighboring streets in small teams after beginning each session with a meal and prayer, he explained. They don’t knock on doors but instead approach people where they are, he said.

“As we walk, we try to have natural conversations,” he said of the people they encounter.

He noted that the teams are heeding Pope Francis’ call to become missionary disciples and Pope John Paul’s message to get out of the comfort zones of a church’s four walls.

When they speak with people, group members identify themselves as part of Holy Apostles, Father Mugavero said, and they give out rosaries, religious medals and tracts upon request. Most times, the groups receive positive responses and many prayers are offered, he said. If people do not want prayers, the parishioners will simply say “God bless you” and move on, he added.

“Sometimes, the discussions go further … with questions about God,” said Father Mugavero. “It’s all about building relationships … making a connection not normally being met.”

The challenge now is getting to the next level of evangelization and inviting people to Mass, as they already have residents coming to the parish center for meals and ice cream social gatherings.

“Even people who are not Catholic or don’t want prayer are glad we are doing what we’re doing,” he said. “They sense the goodness of it, touching people in very meaningful ways. They are feeling the grace of God.”

Troy Walters was happy to see the group of parishioners on Aug. 2 and asked them to pray for his ill grandmother. After they prayed, Salomón Montes-DeOca assured him that God would lift him up. Iluminada Vilca handed a rosary to Walters’ friend, who sat on his porch with him, and explained that the parishioners remember Jesus Christ when the rosary is prayed.

Jennifer Altier sprinkled holy water on Walters before walking away.

“May God bless you and bring you peace,” she said.

Walters told the Catholic Courier that the community needs these teams.

“We need more people like them that show they care,” he said. “It’s a good thing they’re doing.”

“I love what they do, come by and pray with you,” added Phyllis Little, who sat outside her home with her daughter, Carmen, and 1-year-old granddaughter, Deani.

After praying with the group in gratitude for prayers answered, Little said she also appreciates the parish’s dinners and ice cream socials.

“Some people don’t have food to eat,” she said. “They’re really good people.”

Father Mugavero and the parishioners, though, are receiving as much as they give, and each faith-filled moment is like an electric current flowing through them.

“We search for moments like these, which are few and far between,” he said.

Parishioner Tina Louk, a young single mother, said she feels blessed helping to spread the word of God to others.

“I let God lead me,” she said. “This (work) is what it’s all about. ‘I need you to know God loves you regardless.’ It’s important to spread that (message).”

Vilca, a native of Peru, said she sees Jesus in every person she encounters as one of the Missionaries of Peace.

“It’s like our church name, Holy Apostles,” she said as her team walked back to the parish center for reflection and dessert. “We are becoming apostles of Christ.”