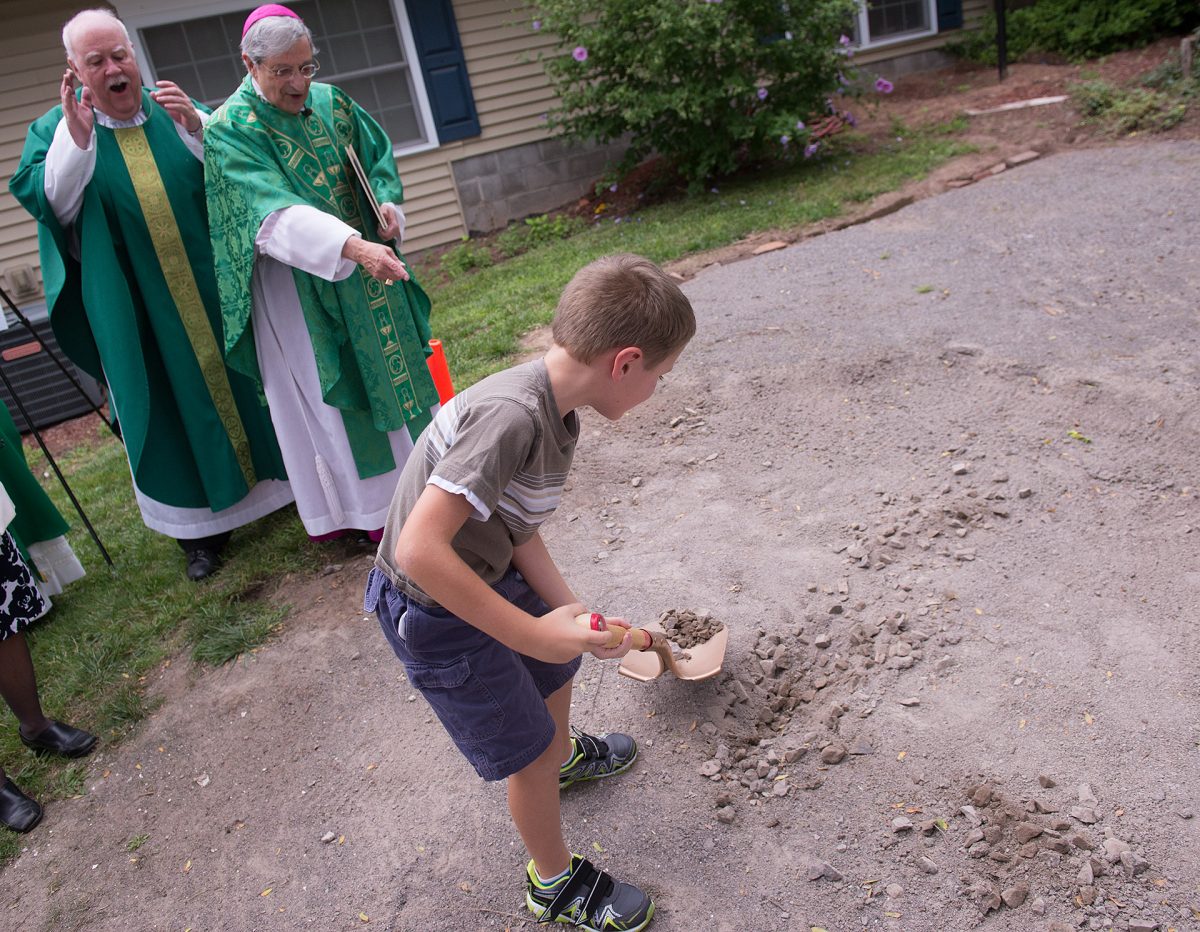 Edward Schofield ,8, of Brockport turns-over a shovelful of soil as Bishop Salvatore Matano and Father Joe McCaffrey look on during a groundbreaking ceremony for Nativity of the Blessed Virgin Mary Church new Parish Center on Aug. 25 in Brockport. (Courier Photo by John Haeger)

BROCKPORT — Construction has been underway since the end of the summer on a new parish center for Nativity of the Blessed Virgin Mary Church.

“Activity is going all the time,” said Patricia O’Brien, who heads the project’s planning committee. “People are really excited.”

Final plans for the new parish center were prepared and approved by the Diocese of Rochester earlier this year.

The parish uses a house on the north side of the church building as its parish center. This structure will be renovated and expanded through the project, O’Brien said.

Ground was broken for the project on Aug. 25 following a Mass celebrated by Bishop Salvatore R. Matano, who touched on the project during his homily, O’Brien said.

“He talked about the fact that the parish center will be a beacon for faith on Main Street in Brockport,” she said.

The 7,640-square-foot center will accommodate 150 people and have two entrances from the church building, O’Brien said. It will feature a kitchen for social events, eight rooms for faith formation, a meeting space for sacramental preparation and adult faith formation, as well as meeting space for such committees as parish council, finance and liturgy, she explained. Two alcoves in the lobby area will be backlit by stained-glass windows of the church, she added.

The project also includes adding handicapped-accessible restrooms in the church, O’Brien said. The church currently has one bathroom that is not handicapped accessible.

The parish worked with the diocesan building commission to design the center and help the parish’s planning committee understand diocesan equirements. Once the design elements were agreed upon and approved, the parish hired LaBella Associates to complete the renovation, O’Brien said.

The planning committee also worked with the Western Monroe County Historical Society to ensure the project would be sensitive to the history of the parish and village. She noted, for example, that a multipurpose room will preserve the original fireplace, she noted.

“We are (also) saving the facade of the … house in keeping with the historical nature of Main Street and being in sync with the look and feel of historical homes in the area,” O’Brien said.

To fund the project, the parish organized a capital campaign that raised about $1.5 million, she said.

“Our parish has been enthusiastic about our project from the beginning, and most generous in supporting it,” said Father Joseph McCaffrey, Nativity’s pastor.

Jorgé Salgado, regional coordinator for Hispanic ministry in Monroe and Livingston counties, said Nativity’s Spanish-speaking parishioners are greatly looking forward to increased space to be available in the new center.

“The parish center will serve us well, especially during grand celebrations we hold, such as the feast of Our Lady of Guadalupe,” he wrote in an e-mail to El Mensajero Católico. “We will be able to host parties and provide food there. In years past, area churches have loaned us their large halls. (The new center) will also serve us in offering retreats, dance performances, and all of our cultural and religious celebrations.”

Plans for the new center, which have been in the works for about four years, began with a survey of parishioners to determine the needs of the faith community’, O’Brien explained.

Meeting rooms and additional space for faith formation — particularly for religious education of young parishioners — were identified as parishioners’ top priorities, she said. The need for gathering space to provide hospitality has been felt especially after funerals, she added, because the current center’s meeting space only accommodates about 12 people.

When the buildings are sold, the ministry will continue as an outreach of the parish and may still be referred to as the Newman Community, explained Shannon Loughlin, associate director of the Diocese of Rochester’s Pastoral Services.