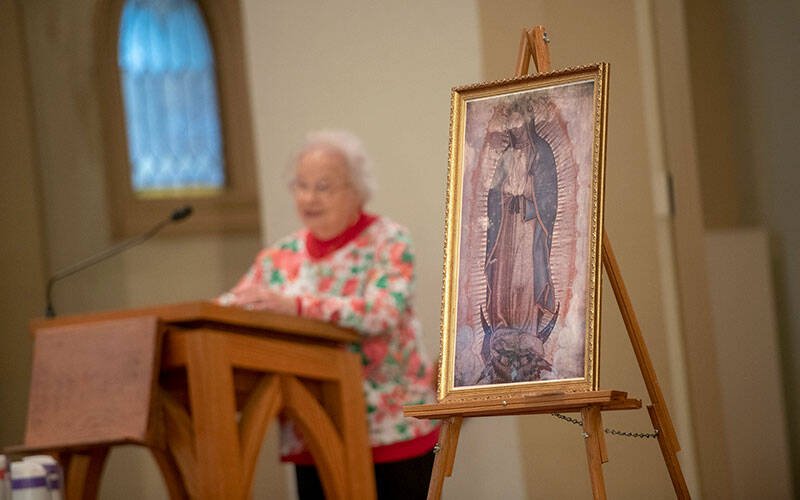 HENRIETTA – Forty years ago, five women met at Guardian Angels Church to pray for a friend with cancer. They continued to meet regularly, and over time, they added prayers for other intentions.

One of the women, Harriet Beiter, shared with the group her special devotion to Our Lady of Guadalupe.

Beiter told the women about a dream she had as a child, in which she saw a beautiful lady standing on a rock by a river. Years later, a friend showed her a book of Marian apparitions, and Beiter recognized Our Lady of Guadalupe as the lady on the rock. After recounting her dream, Beiter said the women decided to name themselves the Our Lady of Guadalupe Novena Prayer Group.

Beiter serves as the group’s coordinator, and meetings are Mondays from 6:30 to 7:30 p.m. at Guardian Angels Church, which is part of St. Marianne Cope Parish. The group, which has about 15 regular members who all share a devotion to Our Blessed Mother, celebrated its 40th anniversary Dec. 12, the feast of Our Lady of Guadalupe.

Beiter said the meetings start with members singing a song to Our Lady of Guadalupe. Then the group recites prayers that can include novenas and the rosary; prayers to Our Lady of Compassion and Queen of the Americas; a Chaplet of Divine Mercy; and prayers for the United States, the new year, the sick, the lonely, the depressed and the pope. The prayer time also includes five minutes for quiet, private meditation, and the meetings conclude with another song.

Karen Davis, a member of the group since 1990, said she believes that where two or more people pray together that the prayers are heard. Davis said she loves the resilience of the group, since its members found ways to meet during the pandemic.

“The pandemic couldn’t keep us down,” she remarked.

Beiter said that during the pandemic, members brought lawn chairs and met in person at Tinker Nature Park. When it got cold, they moved to Wegmans on Calkins Road. Wegmans welcomed them, she said, and an employee even set up chairs for their meetings.

Karen Davis’ sister-in-law, Rosemary Davis, is one of the prayer group’s five original members. Rosemary Davis said she started praying novenas when she was 13 years old. She believes the Blessed Mother helped her husband get the job that brought her to Rochester 51 years ago.

“I just love the Blessed Mother. I can always count on her,” she said.

“I’m a member (of the group) because I need the connection with my Blessed Mother. I feel peaceful praying,” said Irene Taliento, who has participated in the group for six years. “The rosary is our weapon.”

Taliento said she remembers enjoying May crownings at her Catholic elementary school. She also experienced the smell of roses while praying during a medical procedure and believes it was a sign from the Blessed Mother that all would be well, and it was.

Trina Viscardi has been a member for 15 years, and her devotion was encouraged by her mother, grandmother and the religious-education classes she attended. Viscardi said she is fascinated by the 400-year-old image of Our Lady of Guadalupe that is displayed in the basilica in Mexico City, noting that the image on the cloth has not deteriorated or faded.

Ten years ago, Richard Schneider asked his wife, Phyllis, if she would attend the prayer meeting with him, and they have been attending ever since. During the Feb. 14 meeting, the couple, who’ve been married 53 years, each led parts of the rosary while sitting side by side.

Beiter said the prayer group is open to anyone who has a devotion to Our Blessed Mother. She said she hopes people will come and pray with the group and to be with the Blessed Mother.

EDITOR’S NOTE: For more information on the Our Lady of Guadalupe Novena Prayer Group, contact Harriet Beiter at 585-334-2912.